Silynx has just released the C4OPS Hybrid Headset Configuration, an enhanced in ear headset system designed to allow 5 x 5 loud and clear communications in extreme noise environments and optimized for operations in MH-47G Chinooks, A/MH-6M Little Birds, MH-60K Black Hawks, MH-60L Black Hawks, Osprey V22 and other air and maritime platforms. The Hybrid Headset includes a new modified steel core cable, new cable molle clips, and a modified collar/vest clip. The modified collar clip was designed to firmly secure to a shirt collar, vest, or in an internal back strap of a MICH or Ops Core helmet. The collar clip also includes a miniature quick disconnect connector that allows the connection of a low profile, noise cancelling Ops Core Chinstrap Boom Mic. For less overt operations, the boom mic can easily be removed from the collar clip automatically allowing the continuous operation of the headset by utilizing the in ear mic instead of the boom mic. 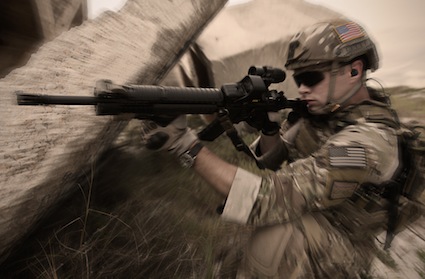 The C4OPS Hybrid Headset Config is the latest addition to the widely deployed and successful C4OPS and Micro C4OPS Headset Systems. The C4OPS is widely used and adopted by all branches of the US Special Forces, including many NATO top tier special forces. Silynxcom.com.