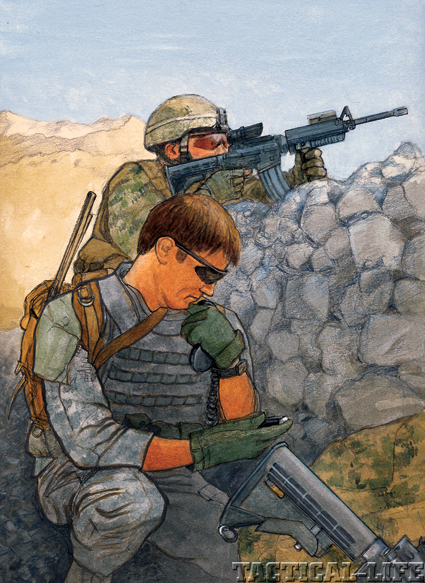 In the midst of fighting near Ganjgal, Afghanistan, Capt. Swenson attempted to coordinate artillery support, which would have ended the battle sooner. Illustrations By Ken MacSwan

Leadership is often described as the ability to get people to do what they wouldn’t normally do. Sometimes this requires a leader to push the envelope and take a stand as U.S. Army Captain William Swenson did on September 8, 2009, in Ganjgal, an insurgent-held village in Kunar Province, Afghanistan.

Before The Storm
On this particular day, Embedded Training Team (ETT) 2-8 would go with Afghan Military and Border Police to meet with the local tribal leaders in Ganjgal, who had said that they were ready to accept the local government’s rule. Prior to that, this hotbed of insurgent activity was unwelcoming of any coalition troops. Captain Swenson had participated in the planning of this mission and was told that air support would only be available from a neighboring operation but was assured artillery fire support would be available.

At the time, Major General Stanley McCrystal had instituted new ROEs (Rules of Engagement) focused on protecting the Afghan civilians and minimizing Afghan civilian casualties. Theses ROEs included the virtual elimination of close-in fire support in population centers and strict rules of not shooting into areas with civilians. All told, the rules were a set of tight handcuffs for a military fighting in an asymmetrical environment where the enemy routinely hid in civilian villages, often using women and children as shields.

ETT 2-8 departed their base in Shakani District at 0300 hours en route to Ganjgal with 60 Afghan soldiers, 20 Afghan border guards and 13 U.S. Marine and Army trainers with the mission of searching for weapons and meeting with village elders to discuss the establishment of Afghan police patrols.

As dawn broke, the team arrived about a mile outside the village, which appeared to be rock-walled compounds perched high on slopes at the eastern end of the Ganjgal valley, 6 miles from the Pakistani border.

Captain Swenson helped coordinate security elements on the ridges of the valley’s southern and northern sides. The main force began its mile trek into a landscape that was essentially a perfect ambush location.
As the American and Afghan column reached the village, the lights went out.

At 0530 hours, the first shots were fired at the lead element of the column. In short order, it became a full-blown gunfight. U.S. Marine Lt. Ademola Fabayo, one of the heroes of the battle, was quoted as saying, “Whatever we do always leaks. You can’t trust even some of their [Afghan] soldiers or officers.” It’s been reported that several soldiers and Marines witnessed Afghan women and children providing ammunition to the insurgents.
As the battle raged on, the column’s security elements started firing at the insurgents from their posts. At 0550 hours, Capt. Swenson, who was helping train the Afghan Border Police, began calling for air support or artillery fire from a unit of the Army’s 10th Mountain Division’s Tactical Operations Center (TOC). The reply was that no helicopters were available.
It’s been reported that Capt. Swenson replied, “This is unbelievable. We have a platoon out there and we’ve got no Hotel Echo [high-explosive artillery shells]. We’re pinned down.” 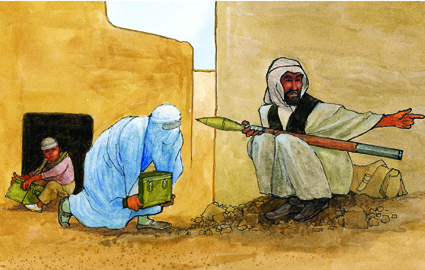 With local support, the enemy rained hell on the U.S. and Afghan troops who were in the area because local tribesmen said they were ready for peace.

At approximately 0600 hours, Capt. Swenson and Lt. Fabayo agreed that it was time to pull back and radioed for artillery to fire smoke rounds to mask the retreat. Swenson was told, “They don’t have any smoke. They only have Willy Pete [white phosphorus rounds].”

Fifty minutes later, the “Willy Pete” artillery shells landed around the valley and smoke began to cover parts of the valley, allowing some cover for the pinned down column. Capt. Swenson and Lt. Fabayo began supplying covering fire so elements of the column could evacuate their position.
At approximately 0700 hours, when they got to a slightly better position, Lt. Fabayo continued to supply suppressive fire while Capt. Swenson applied aid to wounded soldiers with one hand and called in insurgents’ positions to two U.S. helicopters that finally had arrived. The helicopters helped ease the enemy’s fire and allowed the retreating column to move again.

Capt. Swenson and Lt. Fabayo then went to find a vehicle with Marine Cpl. Dakota Meyer and drove back into the ambush location to look for and retrieve the casualties and bodies of any dead soldiers. 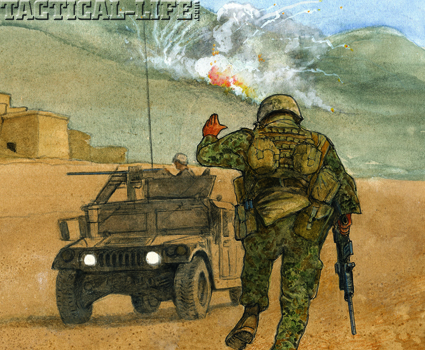 Cpl. Meyer and Capt. Swenson braved enemy fire repeatedly and worked together to save U.S. and Afghan forces, even after Army officers at the TOC denied the requested fire support.

During the subsequent investigation of the battle, according to Military Times, Capt. Swenson expressed dismay at the rules of engagement used in Afghanistan, the lack of leadership of officers who didn’t send help and the second-guessing he consistently experienced requesting fire support on this and other missions.

Capt. Swenson has been quoted as saying, “When I’m being second-guessed by higher-ups or somebody that’s sitting in an air-conditioned TOC, why [the] hell am I even out there in the first place? Let’s sit back and play Nintendo. I am the ground commander I want that [expletive], and I am willing to accept the consequences of that [expletive].”

“I always get these crazy messages saying that, ‘Hey, brigade is saying that you can’t see the target,’” Swenson told investigators. “Brigade, you’re in Jalalabad. [Expletive], you, you know? I am staring at the target. I just get the craziest things on the radio sometimes. Just people second-guessing. If I am willing to put my initials on it, I understand the importance of making sure the rounds hit where they are supposed to hit. I understand the consequences of civilian casualties.”

The firefight lasted six hours longer than it should have due to the lack of
tactical support. Capt. Swenson has yet to be recognized for his actions while Sgt. Dakota Meyer was awarded the Congressional Medal of Honor and both Marine 1st Lt. Ademola Fabayo and Marine Staff Sgt. Juan Rodriguez-Chavez have received the Navy Cross for their heroic actions.
It’s been reported that Capt. Swenson’s award paperwork was “lost.” Other reports indicated that he was being blackballed for his commentary during the investigation.

At least two of the officers in the TOC with Task Force Chosin, a unit comprising soldiers from 1st Battalion, 32nd Infantry Regiment, 3rd Brigade Combat Team, 10th Mountain Division were disciplined following the investigation for “negligent” leadership leading “directly to the loss of life” on the battlefield. Killed in the battle were four members of Marine Embedded Training Team 2-8. They are 1st Lt. Michael Johnson, Gunnery Sgt. Edwin Johnson, Staff Sgt. Aaron Kenefick and Hospital Corpsman 3rd Class James Layton. At least eight Afghan troops and an interpreter also were killed in the battle. Three Americans survived, including Army Sgt. 1st Class Kenneth Westbrook, whom Capt. Swenson administered aid to while under fire but succumbed to his wounds a month later.

Charlene Westbrook, widow of Kenneth Westbrook has said, “A shame that the Army has not recognized one of it’s own. Captain Swenson and Ken were a team together in Afghanistan and he deserves to be recognized for his valor, he gave me four days to speak with Ken when he helped him get MEDEVAC’d from Afghanistan to Walter Reed on September 8, 2009.”

Medal of Honor recipient Sgt. Dakota Meyer has said, “I’ll put it this way, if it wasn’t for him, I wouldn’t be alive today.” Hopefully, at some point, the Army will see it the same way and fully punish those in the TOC that cost lives and honor Capt. William Swenson with an award deserving of his heroic actions. 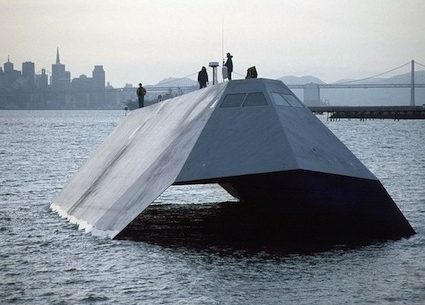 In the midst of fighting near Ganjgal, Afghanistan, Capt. Swenson attempted to coordinate artillery…