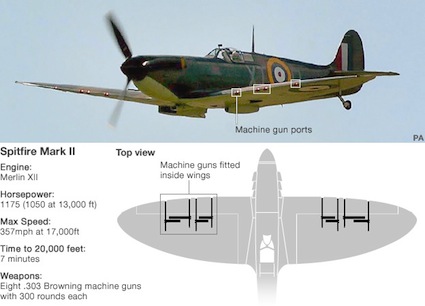 An excavation at the site of a 1941 Spitfire crash in a bog in the Irish Republic uncovered huge, remarkably preserved chunks of plane and six Browning machine guns. After 70 years buried in peat could they be made to fire? They certainly could, writes Dan Snow.

This was the place where, in 1941, Roland “Bud” Wolfe, an American pilot flying a British RAF Spitfire, paid for by a wealthy Canadian industrialist, had experienced engine failure while flying over the neutral Republic of Ireland.

After flying a sortie over the Atlantic, Wolfe was on his way back to his base in Northern Ireland when he was forced to bail out. He parachuted safely to the ground – his plane smashed into the boggy hillside.

Fast-forwarding 70 years and local aviation expert Johnny McNee was able to identify the wreck site. The ensuing dig was accompanied by intense anticipation.

…Minutes later the mechanical digger’s bucket struck metal. We leapt into the pit to continue by hand. One by one the Spitfire’s Browning machine guns were hauled out.

We had hoped for one in reasonable condition – we got six, in great shape, with belts containing hundreds of gleaming .303 rounds. The Irish soldiers then stepped in. This was a cache of heavy weapons, however historic they might be.

Read the rest of Dan Snow’s article at BBC.co.uk (with video).

Image: bbc.co.uk/ An excavation at the site of a 1941 Spitfire crash in a…