by Cory Trapp
in Guns, Rifles
0

The RECON from Underground Skunkworks is an outstanding example of a custom precision rifle. Mike Bush created a new bolt action receiver and turned to Glen Harrison of Defiance Machine for the finishing touches and manufacturing of the Skunkworks Light Tactical Action.

The receiver is round, but it is not a Remington 700 clone and requires the stock to be inlet to a specific profile. While the action accepts any Remington-style trigger, Mike installed a Timney trigger with his own special modifications in the test rifle. The bolt is one piece and helical-fluted, using a special guided firing pin assembly. It uses an M16-style extractor, plunger-type ejector, and the bolt release is on the left rear of the receiver. The bolt handle is large and well shaped, operation was smooth and extraction and ejection were positive and completely reliable. The recoil lug is a separate part that is oversized in thickness and pinned to the receiver. It also has a protrusion above the action to act as a recoil lug for the scope rail, which is secured to the action with six 8-40 screws. Even the heaviest of scopes won’t loosen this rail system. The rail has 20 MOA of slope built in to maximize usable elevation in the selected scope. The barrel thread tenon has been lengthened to increase stiffness. Bottom metal is available in the standard drop floorplate, Accuracy International box magazine compatible or Glen Seekins’ new box magazine system; the test rifle has the Seekins system, which sports a neat push button for the magazine release.

Barrel Specs
The test rifle has a Broughton 5C barrel of 20 inches, 1-in-10-inch twist, heavy-fluted contour with an AAC flash hider/suppressor adapter. Broughton barrels are button-rifled and the 5C indicates the special ‘canted land’ profile. Much debate exists over the ‘best’ way to make a rifle barrel—cut rifling, button rifling and hammer forging all have their adherents. As far as I’m concerned, any of these methods can produce extremely fine barrels. The rifles have a 0.5-MOA accuracy guarantee, and the test rifle did not disappoint us. Cleaning was easy and copper fouling was minimal, indicating an exceptional surface finish from the hand lapping process.

The complete barreled action is finished in Cerakote, OD Green in this case. The action is then carefully bedded into a Manners composite stock using Devcon Titanium putty and Aluminum pillars. The Manners MCS-T3 stock is modified by Mike to widen the forend, inlet and install a Badger Ordnance UNS mount and provide grip texture areas. The stock was finished in a digital camo pattern. These stocks are extremely rugged as the shell is made from a carbon fiber/fiberglass layered system. This produces a very stiff, but lightweight stock system. The T3 is a general use type stock, equally good for a hunting or tactical precision rifle. As such, it has a more curved pistol grip areas and a more conventional raised cheekpiece. The stock is comfortable for all position shooting, not just square range prone.

Sling points were provided to connect the excellent Tactical Intervention Quick Cuff sling system. This is a true shooting sling system that creates proper tension against the forward sling point in any position where the support side elbow can be rested. The separate cuff can be left in place on the support arm, and indeed there are some who have sewn it right into their deployment uniform shirt. A QD buckle allows the shooter to clip into a properly slung position in a matter of a second of two. Disconnecting and moving are equally simple—it’s an excellent accessory for the precision rifle. 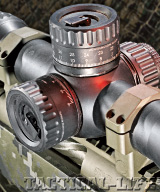 Sight and Sound
The rifle was delivered with a Premier Reticle Heritage 3-15 scope with the Gen II mil dot reticle and 1/10 mil adjustment knobs. This is simply an outstanding riflescope. The glass quality is second to none and the adjustments are crisp, positive and absolutely repeatable. The MTC (more tactile click) option gives the user a definite ‘clunk’ each full mil of travel, plus the knobs have a special cam lock feature that lets the user slip the knob to zero without the need of a tiny, usually unavailable Allen wrench. A cartridge case rim will lift the can lock lever, set the knob as desired and press the lock back down again and you are done.

Also provided with the test rifle was the Advanced Armament Corp 7.62mm SD sound suppressor. Manufactured from Inconel and stainless steel alloys, it is 1.5 inches in diameter, weighs in at 19.1 ounces and adds only 7.25 inches to the barrel when mounted. Initial zero and most test shooting was done with the suppressor mounted—if you have the can, why would you shoot without it? With a quick detach mount system like the AAC unit and the overall length issues, you probably won’t transport the rifle with the suppressor mounted. If time and circumstance don’t permit getting it properly installed, you may need to work without it. In that case, you’ll need to know the shift in point of impact. Only rarely is there no shift, normally its point of impact will vary by as much as 2 to 3-MOA suppressed versus unsuppressed. So long as that shift is repeatable and documented, there should be no problem. In the case of this rifle, the unsuppressed point of impact is 0.5-MOA lower each and every time.

Range Time
I zeroed at 100 yards using M118LR then fired a few groups to get a baseline. I also tested with Hornady 168-grain TAP Precision. Group average was 0.6-MOA with both ammunition types. At 100 yards, there was no perceptible shift in point of impact. The TAP round has a far better terminal ballistics and is every bit as accurate as the match bullet so many people normally use. While the military is restricted to non-expanding ammunition, anyone else using the rifle for serious purposes should be selecting ammunition that provides the best terminal effects on the target within the required accuracy standard. Certainly 1-MOA is plenty accurate enough for any reasonable shot, the TAP rounds were always 0.75-MOA or less. After confirming some come-ups on the 800-yard known distance range, we did some testing on the unknown distance ranges. The rifle performed beautifully.

The only issues I have with this rifle are items of personal preference. The action is, unfortunately in my opinion, named the “Stinker,” no doubt to connect with the company name of Underground Skunkworks. I find that to be rather like the old Chevrolet Nova being sold in Mexico, “No va” essentially means “won’t go” in Spanish. Sales were predictably dismal. I can’t see a lot of people proudly declaring to all their fellows at the range, “Hey, want to see by new high speed custom rifle? It’s a stinker!”

That little bit of marketing madness aside, I had only two technical items not to my liking. I found that the reach to the trigger was a bit excessive, I needed to use the fingertips of my shooting hand to press on the center of the pistol grip to get a proper position on the trigger. If this were my rifle, I’d need to build up the pistol grip area. I don’t know if this is a basic part of the stock design, as I’ve not used the Manners T3 before, but it’s something you might want to check out. I also found the length of pull a little on the long side. I’m a big advocate of a squared up shooting position behind the rifle, a length of pull of 12.5 to 13 inches is fine, anything longer that that starts forcing your shoulders off to an angle behind the rifle. This is less than optimal for recoil control and repeat shots, so I’d specify the stock length to be sure I got what I needed.

Since this was just an ‘off the shelf’ example for testing purposes I make these observations only to note that one should be quite specific when ordering up a custom rifle so you actually get what you want. Mike is quite happy to accommodate requests where it’s possible. These are after all ‘custom’ rifles. If you want a handmade custom precision rifle system, Mike Bush at Underground Skunkworks can certainly deliver.