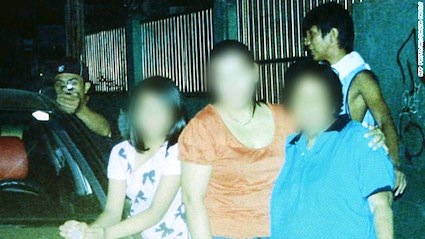 The family of Reynaldo Dagsa provided a photo to police that reportedly shows the councilman’s killer. Image CNN.

It’s not uncommon for criminals to be caught on tape in the age of smartphones and pocket-sized cameras, but you don’t often hear of someone photographing their own murderer.

The Philippine Daily Inquirer and hundreds of other news outlets are reporting that Caloocan City Councilman Reynaldo Dagsa did just that on New Year’s Day.

The photo, which was distributed to police and the media by the Dagsa family, shows Dagsa’s wife, daughter and another relative posing for a photograph. A man in the background is standing behind the family and another man wearing a backward baseball cap is holding a handgun whose muzzle is illuminated by the camera’s flash.

The family seems unaware of the gunman’s presence. Presumably, the two shots that entered the councilman’s chest and arm rang out just after his shutter snapped. Dagsa was pronounced dead at the hospital.

The Inquirer reported that Caloocan Police Chief Jude Santos said the man holding the .45-caliber was arrested Monday in Manila. Santos, however, told CNN on Tuesday that the gunman was still at large and that police had arrested two other men.

Police were looking for the man standing behind the family in the photo, who may have been serving as a lookout, and another suspected lookout who is not in the photograph, according to the Inquirer.