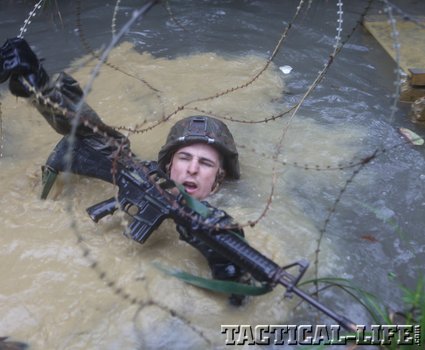 Fresh and Salt water act similarly to disrupt a firearm’s normal operation. They are both corrosive, so if your gun is doused in ocean spray or dropped in a rain puddle, the same initial procedures should be followed for ensuring it will fire

Whether operating in a marine environment, a region prone to heavy rain or a very cold locale, your firearm and its magazine and ammunition will get wet. The introduction of water from sea spray, rain, condensation or complete submersion can negatively affect your weapon, but in nearly all cases it will continue to fire. If left unaddressed, however, the weapon’s mechanical function will be compromised, potentially leading to a total loss. Corrosion is a concern for prolonged exposure, but immediate conditions like the impeded movement of parts and the presence of frozen water are also issues. Fresh and salt water act similarly to disrupt a firearm’s normal operation. Both are corrosive, so whether your weapon is doused in ocean spray or dropped in a rain puddle, the same initial procedures should be followed to ensure firing when you need it to.

A firearm that has been fully submerged presents a major safety concern. If fired without taking some prior actions, the firearm may become unserviceable, even a threat if the barrel becomes blocked and explodes. When a weapon becomes submerged, immediately drain the barrel by tipping the muzzle down, then give the weapon a shake to expel water from the receivers and other components. To assist the process, any chambered round may have to be slightly withdrawn to break the seal by holding the bolt to the rear. With the barrel clear, continue holding the bolt to the rear and tilt the weapon up to clear water from the gas tube.

These actions should address any immediate issues and allow normal operation. When you have the opportunity, examine the weapon, rinse it with fresh water, then dry and oil its components and any exposed magazines. Attention should be paid to the grooves and angles of the gun and its small internal parts, including the sears, firing pin and similar pieces that could easily seize if corroded. Modern ammunition is waterproof—the crimp is airtight, and the primer is sealed. A short rinse and dry will not damage the ammo but will help preserve it. If the cartridge is damaged, discard the round as the powder may be wet. 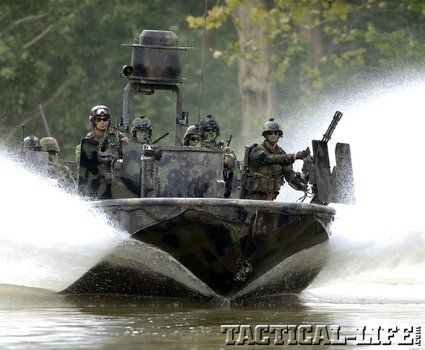 Marine environments present many challenges. Following a few simple practices when your weapon is exposed to water will ensure you’re ready to fight in wet conditions!

If prevention is preferred over post-op cleanup, a weapon dry bag is an option. The best dry bags, like those from Nemo, are custom fit and enable you to fire the weapon from them. However, these can be costly. Sealing the barrel with tape is the cheap remedy, but this could backfire: if the weapon becomes completely submerged , the tape will trap water in the barrel. The best way to ensure water won’t ruin or impede the function of a weapon is to clean and oil it regularly, before it ever gets wet. Simply keeping the dust covers closed is an effective prevention strategy.

Most shooters are only concerned with removing powder residue from the action and the barrel and lubricating the weapon after firing. They’ll also wipe or brush off any obvious dirt, apply some lubricant if the action feels sluggish and then re-holster or store the weapon in a case. But in wet conditions, a lot more attention is required. Any weapon exposed to moisture can corrode and rust, eventually affecting its performance and even making it unsafe to fire.

Corrosion by sea water, called aqueous corrosion, is an aggressive electrochemical process caused by the chloride and oxygen content of salt water. Sea water is far more corrosive than the air moisture in landlocked or fresh water areas—it can cause rust overnight. Aqueous corrosion normally begins with some discoloration, followed by surface rust, pitting, pieces falling off, and eventually loss of all function. This can be prevented by frequent care and maintenance.

The easiest way to remove salt water is to give weapons a rinse with a fresh water hose after completing an underway watch, voyage or other maritime action. Dry the exposed weapons entirely, clean them, then wipe them down with a heavy coat of CLP, a bore-cleaning solvent and lubricant that’s good for rust prevention. Don’t wait until the next day to do this, and don’t rely on someone else to do so. The CLP should prevent much of the corrosion, but if rust develops despite your best efforts, it’s not hard to remove. (Just catch it early, before any pitting starts.) Steel wool or a brass bush will remove the rust and most of the discoloration—CLP or a substitute lubricant will protect the weapon. Put a few drops of oil onto a brush and scrub rusted areas on the exterior until they break up and disappear. Do the same for the barrel. Apply lubricant via a patch to the cleaning rod (or use a bore snake) and ram or pull it through. Wet a cloth patch and follow up with the brush, then apply some CLP with another cloth after the weapon is clean. 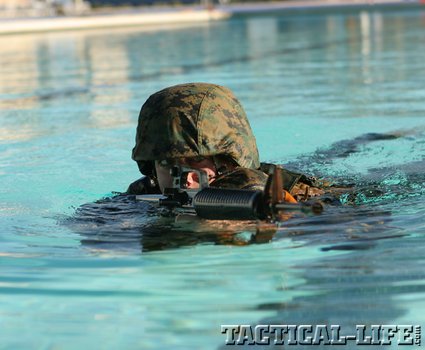 Ammunition is subject to corrosion, same as weapons, and can quickly be rendered unusable and even dangerous. Discoloration is common, particularly on rounds stored for long periods in magazines or open ammo boxes. The color isn’t much of a concern and can be cleaned easily with a brush, steel wool and some oil. But pitting and more serious corrosion of the brass casing are bigger problems: if the casing is breached and leaves an unsealed chamber, the round may misfire and become unsafe, even if you cleaned it. Fresh water can be used to remove the salt water, but make sure you wipe down each round and its container after they’re bathed. Any moisture can lead to corrosion. Moisture left sitting in a magazine is bound to wreck the ammunition inside.

Also, don’t forget to take care of the mounts for any weapons system that uses them. The M240, M2 Browning, MK19 and Mk25 all rely on their mount to function for horizontal movement and elevation when targeting.

Without the mount, the associated weapon is rendered a static gun that will fire along the same trajectory for every shot. Bathe, wipe and employ a brush and CLP to remove any corrosion. Also attend to the mount’s retainer pins or stops to prevent unintended lateral movement of the weapon in the event they are corroded.

Weapons will function under extreme winter conditions, provided they are properly maintained. Normal lubricants thicken in cold weather, resulting in stoppages or sluggish actions. During the winter, weapons must be stripped completely and cleaned with a dry cleaning solvent to remove all lubricants and to minimize the amount of water that freezes on and inside the weapons. Try to keep snow and ice out of working parts, sights and barrels, as even a small amount of moisture may cause malfunction. Muzzle and breech covers should always be used. Before firing the weapon, examine it carefully, especially the barrel. If the barrel is blocked with solid ice or snow, it will burst when fired. Snow on the outside of the weapon may drop into the breech and later form ice, causing malfunction.

Also, condensation forms on weapons when they are taken from the extreme cold into a heated environment—they will appear to sweat. Remove this condensation as soon as possible, or the film of moisture will freeze when the weapons are taken back into the cold. If weapon parts become frozen, warm them slightly then move each piece gradually until thawed. If the weapon cannot be warmed because it’s in the field or being carried on an operation, remove all visible ice and snow from the weapon and gradually move the parts until action is restored. When slow warming is not possible ice in the barrel can be removed with warm gun oil.

Extreme cold does not materially affect the accuracy of weapons or the performance of small-arms ammunition. (Ammunition should be kept at the same temperature as the weapon.) Magazines must be cleaned of all oil and preservatives and checked frequently for any ice, snow or condensation. Also remember that extreme cold will lower the efficiency of all batteries (with optics or lights, for example) and even freeze them. Carry batteries close to the body to help keep them from freezing.

Will a gun fire when wet? Yes. But keep it dry whenever possible and provide frequent care and maintenance to ready it for the next shot. 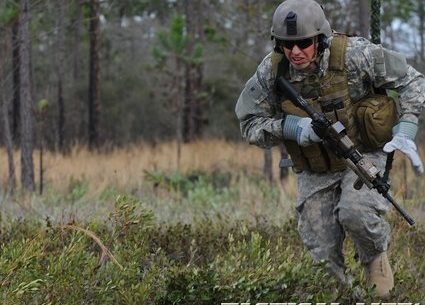 Fresh and Salt water act similarly to disrupt a firearm's normal operation. They are…