Slovenia, which was part of the former Yugoslavia, received its independence in 1991. Bordered by Austria, Hungary, Croatia and Italy, Slovenia’s terrain is mountainous. Slovenia was quick to adopt a free enterprise economy after breaking free of the Communist system. After achieving its independence, Slovenia adopted a constitution guaranteeing a wide array of civil rights. Slovenia’s population is slightly over 2 million. Its capital and largest city is Ljubljana. Slovenia has a small coastline of 46.6 kilometers on the Gulf of Trieste and one port, Koper, which is capable of handling freight. 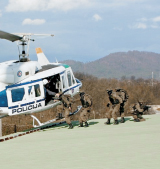 During Slovenia’s 10-day war for independence, Specialna Enota, a highly trained anti-terrorist unit established to protect its citizens and newfound liberties, functioned as a military unit used to secure Ljubljana Airport and other key installations.

Although a forerunner of Specialna Enota dates back to 1972 when a unit was formed within the Republic of Slovenia (then part of Yugoslavia), in response to the Munich Olympic Massacre, in its current form Specialna Enota dates to 1990 when the unit was organized into a command cell, a counterinsurgency unit, a mechanized unit, a logistics unit and two operational units: A and B. The mechanized unit was disbanded in 1994 as military duties fell to the Slovenian armed forces while Specialna Enota concentrated on its anti-terrorist duties.

Operational Units
The current unit organization includes about 100 personnel broken down as follows: Command and Control Element; Unit A that includes the tactical teams that carry out most rescue or assault missions. “A” incorporates 45 operators who can break down to five-man entry teams. Unit B supports Unit A and includes about 20 specialists such as snipers, divers, armored car drivers, dog handlers, etc. Unit C handles logistical support for the unit and consists of approximately fifteen personnel; and Bomb Disposal Unit incorporates fifteen personnel.

Specialna Enota is normally deployed on 40 to 50 missions per year. These missions break down as follows: anti-terrorist operations including hostage rescue, arrest of dangerous criminals and dealing with barricade situations, VIP protection, securing critical locations, apprehending dangerous fugitives and assisting other police units with their training. Specialna Enota would also have a MAT (Maritime Anti-Terrorism) mission along the country’s small coastline and in its territorial waters.

Qualifications To Join
To serve in Specialna Enota, a candidate must have spent at least three years with the Slovenian Police and have a flawless record. Some preference is given to officers who have specialized skills such as martial arts, skiing, scuba, small boat operation, emergency medical skills, etc. Candidates who have consistently scored highly on firearms qualification are preferred as well. Prior to selection, the candidate must pass a rigorous medical examination, psychological testing and physical testing. Those who pass these tests enter a six-month training program that emphasizes the skills necessary for anti-terrorist operators.

Training Techniques
Training includes combat shooting, hostage rescue tactics, high speed driving, mountain operations, rappelling, helicopter insertions, breaching and explosives, small unit tactics and martial arts. Some members of the unit will be trained as snipers, explosives experts, scuba divers and in other specialist skills. Many European anti-terrorist units receive parachute training, but I have not found information to indicate that this is the case with Specialna Enota. However, it is quite likely that at least some members of the unit will receive freefall parachute training to allow insertion into some of the mountainous areas of Slovenia.

Specialna Enota Guns
Specialna Enota uses Beretta 9mm pistols including the Model 92. Sig Sauer’s P226 pistols are also used as well as Glock 26s for VIP protection details. Submachine guns (SMG) in service include the Heckler & Koch MP5A5, MP5SD and MP5K, the latter for VIP protection assignments. The principal weapon used for many assaults appears to be the HK G36K. However, other battle rifles are available including the excellent Sig Sauer 550 and Sig Sauer 552.

Slovenia has adopted the FN F2000 battle rifle, and it is likely that Specialna Enota has access to this bullpup rifle as well. The principal sniping rifle is the Steyr SSG, but reportedly some Sig Sauer SSG3000 rifles have been used as well. For longer-range engagement, the .50 BMG Hecate II is available. I have been told that the unit has .338 Lapua Mini-Hecates as well. Reportedly, Barrett M82 .50 caliber rifles have also been used. Remington 870 and Winchester 1300 12 gauge shotguns have been used for blowing locks or hinges as well as in ship-clearing operations.

Final Notes
Slovenia is a very small country and is undergoing a recent democracy so it is important that it maintains a serious deterrent to terrorist groups that might consider targeting its citizens. Specialna Enota is Slovakia’s serious deterrent.