0
SHARES
224
VIEWS
Share on FacebookShare on Twitter
The Winchester PDX1 combo slug/buckshot load provides officers with the flexibility of both types of shotgun loads in a single hull.

Truly, the shotgun (usually the family’s most popular brother, the 12 gauge) needs no justification for popularity among knowledgeable law enforcement, military, and civilians. It’s an effective weapon capable of delivering devastating damage to its target, when handled properly and stoked with the correct rounds.

The effectiveness of the shotgun relates directly to the chosen load, traditionally either buckshot or slugs. These projectiles can do what the lowly handgun round cannot, and that which many rifle rounds fall short of—deliver massive tissue damage with a single press of the trigger. Dumping a full load of buckshot or a massive slug into the thoracic area usually produces immediate incapacitation. I say usually because, as always, exceptions exist. For example, noted NYPD gunfighter Jim Cirillo reportedly delivered a 12 gauge slug into a felon’s cardiac area only to see him rapidly exit a business and flee quite a ways down the block. 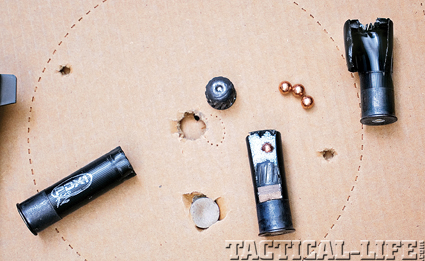 Winchester PDX1 12 gauge ammunition is loaded with a 1-ounce rifled slug and three copper-plated 00 buckshot, using a wafer wad, all stuffed into a 2¾” hull.

Buckshot of the 00 variety is an excellent attitude adjustment load (other sizes may occasionally work, but their records are spotty), with most working well out to around 15 yards from an 18-inch cylinder choke barrel. At this distance, untreated barrels usually keep all of the pellets in a 10- to 12-inch group. That’s torso size with a little margin for error. That distance can be stretched to 25 yards and beyond through the use of specially treated barrels. Picture, if you will, 8 to 9 little 0.33 caliber cue balls, weighing about 55 grains each, careening off one another or the not infrequent bone inhabiting a body — this gives an idea of why buckshot is so popular. Unlike in the movies, a shotgun spouting buckshot does need to be aimed, albeit, perhaps slightly less precisely than a rifle or carbine.

On the other end of the spectrum is the ever-impressive 12 gauge slug. A large hunk of hurtling lead, tactical slugs usually weigh in around one ounce, or 437 grains. That’s almost two .45 ACP bullets with a diameter of about twice of that famous round. With a good set of iron sights or an optic in place, these slugs can be dropped into cranial or cardiac areas with monotonous regularity out to 50 yards, sometimes beyond.