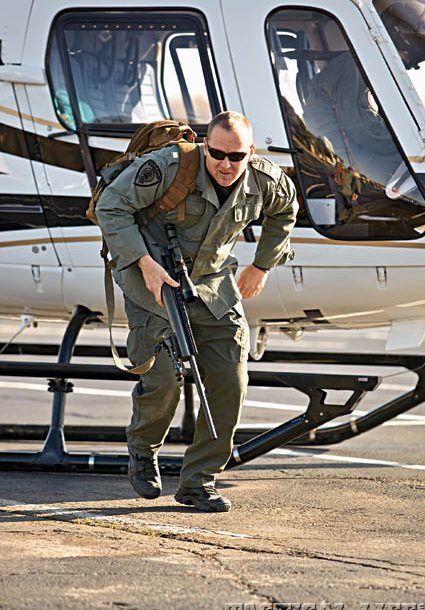 Big venue problems can be decisively solved by small police units, sometimes a lone LE sniper with a bolt-action rifle.

Grab your go-pack and join us for another fully loaded issue where we show you many good things that come in small packages. In this issue, Lt. David Bahde introduces us to the McMillan CS5 “Stubby,” a spot-on urban sniper that shoots half-minute of angle no matter what you feed it, and not only the groups it shoots are small: this short-barreled, suppressor-equipped stalwart comes in a 23.5-inch suitcase.

Yes, the right “small” trumps the wrong “big” every time. We bring you the story of the Switchblade, the remote-controlled recon/bomber aircraft troops actually carry with them. Jack Satterfield tells us how ambushed patrols in Afghanistan no longer have to call for air support and hunker down in hopes it’ll reach them before they’re history. See how they quickly deploy this man-portable wonder to search and destroy their attackers in real time.

Personal defense weapons are coming into their own because they are smaller, lighter, more maneuverable and concealable than battle rifles. Rob Garrett takes you to Advanced Armament to wring out their new “Honey Badger,” and LWRCI for their new PSD 300. Both suppresor-ready rifles are chambered in 300 BLK for close work on out to 300 meters.

We show you how smaller can be at the very tip of the spear, as Christian Shepherd conducts a tour of IWI, the successor to IMI who is producing such items as the Mini Uzi and the even smaller Micro Uzi, compact and subcompact versions of the Jericho pistol, and what is probably the world’s smallest, lightest infantry machine gun, the Negev.

In the LE arena, where long arms are more and more frequently required to resolve hostage or barricaded-shooter scenarios, rifle accuracy is more important than rifle firepower. Today’s LE operators are being offered a greater mission-specific selection of full-dress, box-magazine bolt rifles in .308, and we bring you the full inside story of Savage’s new long arm for lawmen, the Model 10 BA, and Ruger’s active-shooter equalizer, the Ruger Gunsite Scout.

Terrorism, one of civilization’s biggest problems today, is often dealt with most effectively by small, elite units such as Germany’s Kommando Spezizlkrafte (KSK), and we introduce you to this Teutonic hard corps noted for their tough selection, tougher training, and specialized weapons. In their specialized counter-terror arsenal, you’ll see HK416 variants with diminutive 10-inch barrels, and the fast-firing HK MP7 in 4.6mm.

After terrorism, possibly the second hardest problem to address in modern law enforcement is cross-border smuggling of narcotics, illegal immigrants and other contraband. We take you on duty with the police force of Nogales, AZ. Stemming the tide and protecting citizens from crime largely driven by smuggling activities is the 65-man NPD, a highly trained and motivated unit bolstered by a Special Response Team and K9 unit.

Piracy on the high seas is an age-old problem that continues unabated—except among vessels who engage well-trained, well-armed and experienced security pros such as San Antonio, TX-based ESPADA Services.

You’ll meet them, then you’ll glide in with SEALs in a night raid to rescue aid workers held for ransom in Somalia. Their goal was rescue, but sometimes these khat-buzzed pirates won’t give up without a fight.

Finally, we show you one of the great firepower weapons of all time, the British Sterling submachine gun. TW’s Leroy Thompson takes you to the range with the new, civilian-legal semi-auto rebuild of this stalwart by Century Arms. Like it has always been, the Sterling proved consummately reliable and fun out to 100 yards.

This issue of Tactical Weapons shows you everything—large and small—that operators need to get the job done. 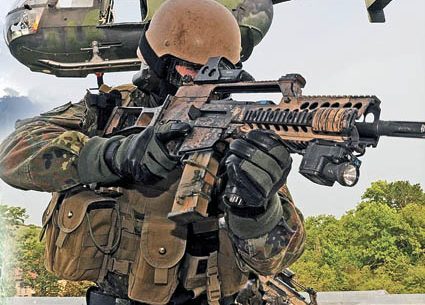