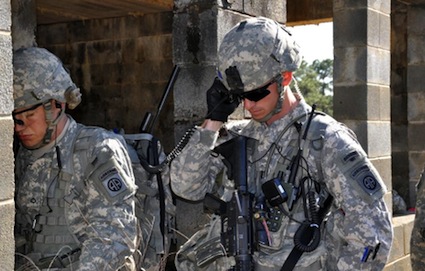 Paratroopers from the 82nd Airborne Division communicated via voice, data and images as they swarmed a mock village to capture a high-value target. Information traveled rapidly up and down the chain of command – and horizontally between team and squad leaders.

“What I watched with interest today was the ability to take pictures of high-value targets, immediately provide them to the company or to the battalion command post,” Chiarelli said afterward. “I saw the ability when a Soldier is wounded to take a picture of the wound and to pass that to the doctors, so that medics can make sure that they are treating the Soldier in the appropriate way, given the wound that he has received. So there are many, many applications of this.”

In an expeditionary force like the 82nd Airborne Division, which prepares for full-spectrum operations around the globe, Soldiers need a communications solution they can carry with them on the fly.

“Where we go, there’s not going to be a vehicle for us,” said Maj. Nicole Vinson, communications officer for the 3rd Brigade Combat Team of the 82nd Airborne Division, who initially identified the gaps the new equipment aims to solve.

“What we were really focusing on was just the voice capability down to the team level, but in addition to that they took it to the next level (with) the data capability,” Vinson said. “For the company and below, it’s very effective.”

It was Vinson’s request that led officials from the Joint Program Executive Office for the Joint Tactical Radio System, or JPEO JTRS, and Program Executive Office Command, Control and Communications – Tactical, known as PEO C3T, to join forces and develop a solution. For the exercise, JTRS HMS Rifleman and Manpack radios were married with PEO C3T prototype handhelds, demonstrating interoperability between programs of record in the “transport layer” and the “application layer.”

JBC-P displayed blue icons indicating the real-time GPS locations of friendly forces across a map of the battlefield, where users could also plot enemies or landscape hazards to alert their teammates. TIGR enabled users to exchange photos, and to enter and retrieve historical information relevant to the operation.

When the paratroopers needed to change direction halfway through their simulated mission, they did so quickly and seamlessly. Without the radios and handhelds, they would have relied on much more primitive methods.

“It would just be shouting through the woods. That’s all it would be,” said Sgt. Kyle Hayden, one of the squad leaders. “It makes it much smoother and faster. You can be a little sneakier, too, because now I’m not yelling (instructions).”

Spc. Randy Fite, who served in Iraq in 2008-09, said the system “would have been great to have” for urban combat.

“We tend to get split up, separated,” Fite said. With the handhelds tracking blue forces, “I don’t have to radio back to the truck to see where another squad is at and where they’re moving to. I can just pull out my phone and look at it.”

Soldiers said they could use the gear with little training.

“We got a five- or ten-minute class,” said Spc. Hao Bui. “If you know how to use a phone, it’s pretty simple.”

At the dismounted Soldier level, the information was conveyed over the secure terrestrial network provided by HMS Manpack and Rifleman Radios. The radios were integrated with Warfighter Information Network – Tactical, or WIN-T Increment One to carry the information between the ground troops and the battalion tactical operations center.

“It’s across all of the echelons, from the Soldier to the (Tactical Operations Center),” said Col. Michael Williamson, the Army’s deputy program executive officer for Integration Networks. He praised the cooperation across different organizations and integration of system components to “optimize” performance.

“Instead of developing a bunch of individual systems that work their best, what we’re really trying to do is figure out how do we tie these all together so they provide the best capabilities for the Soldier,” Williamson said. “What I think you saw here is where these PEOs got together and actually made that happen. Our challenge coming out of this is, now that they’ve seen it, held it, touched it, used it – now we have a responsibility to put it in their hands.”