by Fred Pushies
in Guns, Rifles
0

In May of 1957 the US Army was issued a new service rifle, replacing the combat-proven M1 Garand and Browning Automatic Rifle (BAR). This new weapon was the US rifle, 7.62mm, M14. The Army Field Manual 23-8 described it as “…a lightweight, air-cooled, gas-operated, magazine-fed, shoulder weapon. It is designed primarily for semiautomatic fire.” The M14 was the main battle rifle that went to war in the Republic of Vietnam. During the mid-sixties, however, a new “black rifle” entered service with the US military and the M16 replaced the M14. 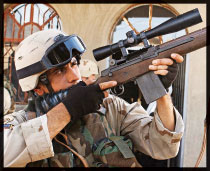 The M14 would take on the mission of a sniper weapon as it was refined into the XM21 Sniper rifle. The hard-hitting weapon would remain active within the special operations community, seeing use with the Navy SEALs, Army Rangers, and subsequently Delta Force.

The lineage of the M14/21 rifle continues as the US military conducts their missions in the Global War on Terrorism. Developed and manufactured by Smith Enterprise Incorporated (SEI), the M21A5 “Crazy Horse” Squad Designated Marksman (SDM) rifle is a modified M14 weapon being used in counter-IED and sniper missions in the southwest-Asian theater of operation.

Ron Smith, the president of Smith Enterprise, stated, “It looks very simple, but it is a very complicated rifle.” The Smith family knows something about weapons, as they have been in the ordnance business since 1910. In its long heritage the company has spent the last twenty-eight years specializing in the M14 rifle. The “Crazy Horse” is the Bentley of M14 rifle systems. For those of you who salivate over processes like heat-treat, cryogenic and carbonized hardening, you will be mesmerized as you fielded strip this rifle over and over to admire the skilled workmanship. For the rest of you who just want a rifle that is durable, reliable and accurate, you will not be disappointed. For the latter group, you will probably enjoy it even more, because you will actually be getting trigger time, as opposed to those “oohing and ahing” about the precision mechanics inside.

The development of the rifle was to offer the US military a method of modernizing the current inventory of M14s into a proven and cost-effective sniper system. Since 1980, Smith Enterprise has rebuilt numerous M14 rifles for the US Military and foreign operators.

At a first glance the M21A5 Crazy Horse appears like any other M14/M1 rifle, but as the old adage goes, “you can’t judge a book, by its cover.” The rifle starts off with a synthetic stock, which is about the only common item, and then as we go into the features the craftsmanship becomes more evident. The rifle has a medium-heavy chrome molly barrel with a 1-in-10-inch right-hand twist, grooved and chambered for 175-grain M118LR ammunition as the barrel, bolt and LRB receiver are cryogenically treated prior to assembly. Smith Enterprise has redesigned the gas cylinder including modification of the gas plug.

Modifications
A welcome modification is the extended bolt manufactured from 8620 heat treated steel built to the same specifications as the receiver and bolt. This upgrade is critical in cold weather of where speed of operation is a factor. Smith Enterprise has additionally developed a new trigger group for the rifle, which is fully adjustable for take-up and backlash with a trigger pull of 2.5 to 5 pounds. The weapon is fed from a common M14 20-round magazine.

Located on the fore-end of the stock assembly are three Picatinny rails, positioned at three, six and nine o’clock. The two side rails are 775 bar stock clear hard anodized aluminum, with aluminum backed gusset plates. Ron Smith explained, “The lighter gray color was requested as black in not a color naturally appearing in nature.” The bottom rail is used primarily for a quick released bi-pod. This rail is backed with a hardened steel gusset to facilitate any rough use when in the field.

Drawing from his experiences in the jungles of Vietnam, Ron Smith, as a young Marine learned from Murphy’s Law of Combat that tracers work both ways, and if you can see the flash of the enemy’s gun, he can see yours. The best way to avoid this situation was to get rid of the muzzle flash. Sonja Sommers of SEI developed the Vortex DC Flash Eliminator incorporating a 5-, 10- and 15-degree twisted helix design, which virtually eliminates the muzzle flash. The Vortex attaches directly to the barrel threads, hence the name DC or direct connect. In conjunction with the Vortex is the Front Sight Gas Lock (FSGL), which is not only part of the sight housing but also aids in tightening up the gas cylinder assembly.

Scope Selection
Attached to the M21A5 is a Rapid Reticle 800-2 10×42 scope manufactured by Pride Fowler Industries. The reticle consists of several hold-over lines ranging from 800 on the bottom to 100 near the top of the reticle, referred to as the Rapid Reticle Aiming System. Once the scope is zeroed, the shooter merely has to adjust the focus to the appropriate yard indicator for the desired range and wind estimation. The scope is equipped with the traditionally windage, elevation and parallax focusing knobs for fine-tuning. The scope is waterproof as well as shock proof. The scope is calibrated for the most used 168-grain or 175-grain match rounds.

The scope is mounted to the rifle using a SEI scope mount and ring package. Currently, SEI is the only manufacture in the US of the EDM (Electrical Discharge Machining) optical interface components. EDM is a high tech method of cutting hard metals. This method is also used on the front and rear sights of the rifle. The scope mount is attached to the stock and not welded to the receiver.

Mounted atop the 800-2 scope is the Special Ops Compact Sight. This compact sight incorporates a red LED in 6061-T6 aluminum and the body is finished in black anodized. It has three settings: off, on and auto. In the auto mode the LED will automatically adjust to ambient light.

Range Time
While the military version of the “Crazy Horse” is fitted with fire select indicator for full automatic, the version I received did not have that. The scope mount sets rather high, so it took me a few rounds to settle into the proper feel for the rifle/scope setup. Once I found the sweet spot, I was able to achieve some sub-MOA impacts on the targets set out at 100 yards.

From its inception through today’s battlefields, the M14 rifle has proven itself time and again as a hard hitting, battle rifle. The need for a semi-automatic sniper rifle has become more apparent as America forces pursue elusive enemy in the urban environment. The SEI M21A5 “Crazy Horse” and PFI 800-2 scope are capable of providing precision shooting and quick target acquisition. The ability to take-down an insurgent, and then another with a quick follow-on shot is crucial to US Forces as they continue to prosecute the Global War on Terrorism. Whether you are defending our great country, our just want to get some trigger time with a precision 7.62mm rifle, this setup is worth a look.