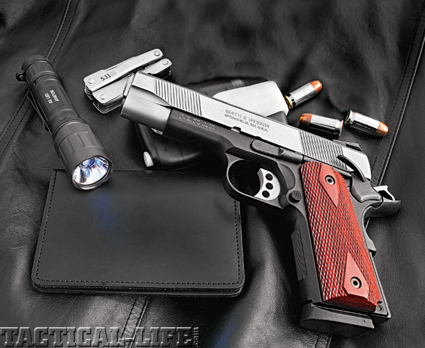 The Smith & Wesson 1911 Compact ES combines a “Commander” length slide and barrel with an “Officer’s” shorter frame. Employing a lightweight Scandium-alloy frame, the Compact ES meets every standard for an ideal duty or plainclothes 1911.

THE 1980’s represented a major turning point for the handgun market here in the U.S. After almost 100 years of dominance, the double-action revolver was pushed to the back burner by the autopistol. The military’s quest for a new service pistol gave rise to a number of new designs, which in many ways, proved far superior to what had come before.

These new, reliable double-actions also caught the eye of law enforcement agencies that were eager to upgrade their sidearms in order to deal with a better-armed criminal element. In a few short years, the wholesale switch from revolver to pistol was just about complete. Armed citizens followed the lead of the police, which sealed the fate of the revolver with the exception of small frame snubs.

Fast-forward to the present, and you may note a subtle transition taking place. Traditional double-action pistols with a long, heavy trigger action for that initial shot, no longer dominate the scene. The DA pistol’s popularity has been eclipsed by autoloaders with a uniform trigger pull throughout the firing cycle. Second generation double-action-only (DAO) pistols command a significant percentage of the market, but striker fired, short trigger action autoloaders are now the hottest ticket in town.

Consumers simply feel the short, light trigger action and simplified manual of arms with these pistols allow them to be at their best.

If you accept this logic, this may explain the resurgence of the 1911 pistol. Although the 1911 have enjoyed a loyal following for years, the DA pistol of the 1980’s overshadowed its popularity. But, if a striker-fired pistol with a 5-pound trigger is acceptable, why not a 1911? Apparently, many shooters feel the same way, and today the 1911 is more popular than ever. To meet the demand, several companies are now producing a wide range of 1911 pistols.

Smith & Wesson began cranking out 1911 pistols a few years ago, much to everyone’s surprise. Many folks have a need to carry a concealed handgun, but find a full-size 1911 beyond the limit of practicality. To fill this niche, Smith & Wesson has introduced the SW1911 Compact ES, a thinking man’s pistol, which is perfect for the law enforcement officer or responsible citizen. The Compact ES successfully incorporates excellent shooting qualities into a lightweight, concealable pistol chambered for the hard-hitting .45 ACP. 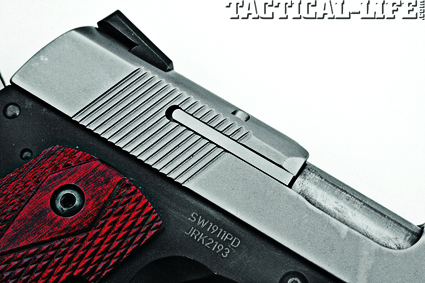 Truth be told, I’ve long been suspicious about the reliability of shortened or lightweight 1911 pistols. Steel frame, full-size pistols from reputable manufacturers tend to be very reliable as long as quality magazines and ammunition are utilized. Chopped and channeled pistols have often proved finicky.
The S&W 1911 Compact ES features a Commander-length slide and barrel, mated to a reduced height Officer’s size frame. The frame is rendered from Scandium alloy, a relatively new material that was originally used in the aeronautical and aerospace industry. By combining a small amount of Scandium with aluminum, S&W engineers have been able to create a frame that rivals the durability of steel but is significantly lighter. 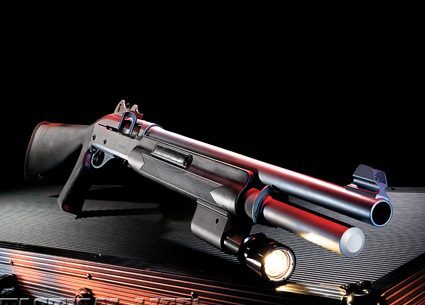 A reliable custom cruiser shotgun, the Nighthawk Tactical 110 brings semi-auto firepower to the...