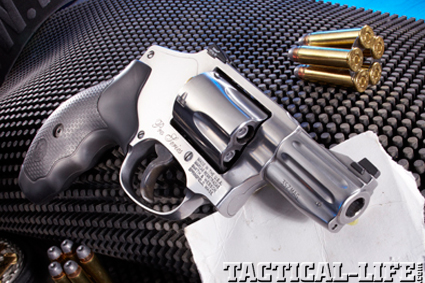 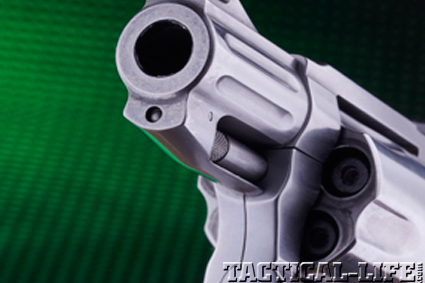 2 of 9
Barrel
The barrel shroud protects the ejector rod from being bent for greater reliability. Its curvature also allows for easier reholstering. 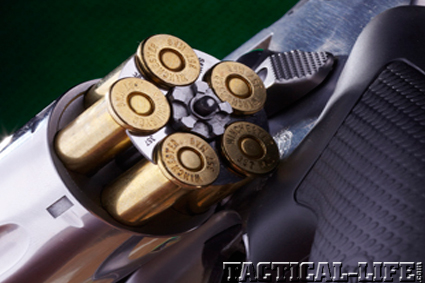 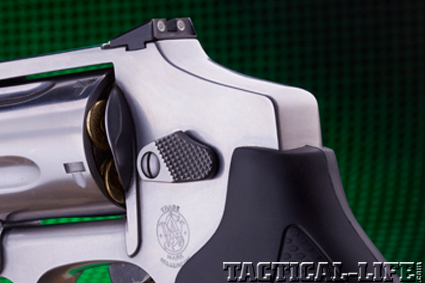 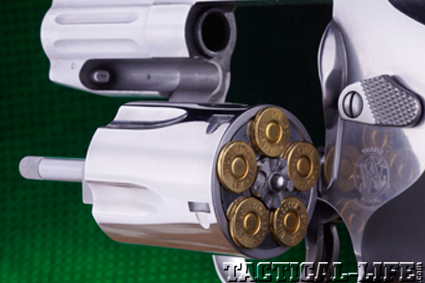 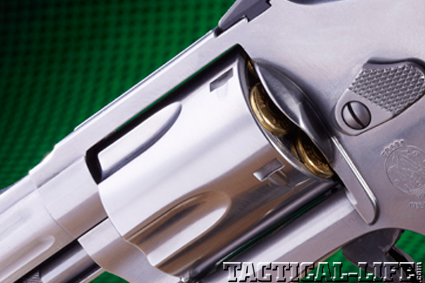 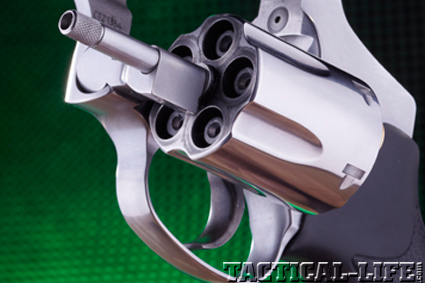 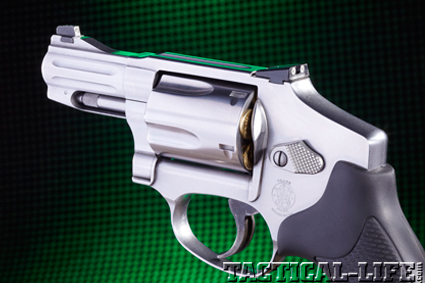 8 of 9
Left-Side
“Carrying a revolver for backup has distinct advantages, and the S&W 640 Pro Series is among the best choices available.” 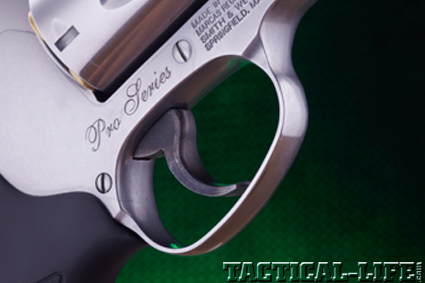 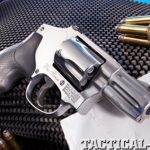 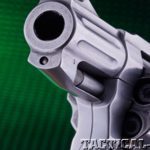 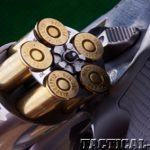 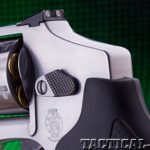 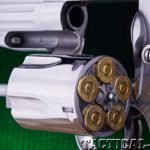 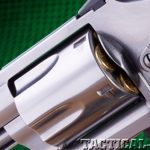 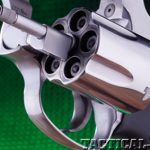 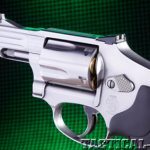 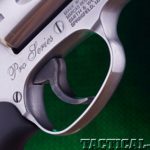 Not every cop carries a backup gun.

Some feel that the added weight can be a hindrance, and that extra magazines and the mandatory carry of less-lethal options (i.e., Tasers) reduce the need for a backup gun. But I feel that carrying a second gun is well worth the effort in many instances. For those who do decide to carry, the first question is often “revolver or semi- auto?”

Because backup guns are not standard-issue with some police agencies, officers have a wider choice of options. Though many prefer to carry a subcompact version of their primary weapon because of the ammo, magazine and fire-control commonality, there are reasons why revolvers are preferable even when the primary is a semi- auto.

Yes, revolvers can have shortcomings as primary weapons, but these weaknesses are less apparent in situations in which backup guns tend to get used. And when will you resort to your backup? When your primary becomes non-functional or runs out of ammo, during an attempted or actual disarming, or if you need to arm another person.

Compared to semi-autos, revolvers are mechanically more reliable, more forgiving of operator error and simpler to operate under stress. With revolvers, there’s no chance of limp-wristing and creating a stoppage, no magazine to accidentally release, and no slide movement to impair the action if it is blocked or if ejected shells bounce off something and back into the ejection port. Yes, elementary gun handling skills prevent some of the operator-induced mistakes that can cripple a semi-auto. However, a backup gun often comes into play when an adversary has grabbed your primary pistol and placed you in a life-or-death struggle as the assailant attempts to disarm you. In those scenarios, you won’t have an ideal firing grip, the mag release may be accidentally hit or the slide may be pressed out of battery, creating a stoppage on an autoloader during a struggle. Contact shots can do the same to autoloaders, and those shots are likely to be the type you will take in these circumstances.

With no mechanical safety to deactivate, revolvers are simpler to operate than semi-autos. Other than the cylinder release, they are ambidextrous, which matters because backup guns are often carried in holsters accessible by either hand (e.g. ankle, cross-draw) or on the support side only in case your strong-side firing hand is disabled or engaged in a fight.

Though the Smith & Wesson 640 Pro Series is a sound choice for a backup gun simply by virtue of its being an easily concealable revolver in a major caliber, it also offers added features that enhance its capability and reliability.

The S&W 640 is a five-shot, double-action-only (DAO), stainless steel .357 Magnum with a 2.125-inch-long barrel. The Pro Series costs $80 more than the standard 640, but it comes with three-dot Trijicon night sights, a fully shrouded ejector rod, a fluted barrel and a cylinder face recessed for using moon clips.

The sights have white outlines surrounding the circular tritium vials. The sights are dovetailed to allow for windage adjustments by drifting, which is not an issue at the distances at which backup guns are usually deployed; nevertheless, a straight-shooting pocket handgun can be used for longer engagements when the marksman is capable.

The S&W 640 is easy to carry concealed. The concealed hammer is fully covered by the upward curve of the frame above the backstrap, which makes drawing from a pocket snag-free and keeps dirt out of the action. The Pro Series upgrade has a full barrel shroud that does two things. First, it mitigates one of the revolver’s few vulnerabilities—a bent ejector rod that can keep the cylinder from turning. Second, the curve on the forward edge of the shroud makes reholstering much easier.

I tested the S&W 640 with one .38 Special and two .357 Magnum loads. Though the .357 Magnum loads produced more recoil, they were slightly more accurate from the bench due to their longer case lengths, which eliminate most of the freebore within the cylinder. Winchester’s 110-grain JHP and CCI Blazer’s 158-grain JHP performed the best, producing five-shot groups, shot from a bench rest at 7 yards, measuring 1 inch. Remington’s 130-grain FMJ .38 Special turned in a best group of 1.13 inches. Shooting off-hand and under time constraints, I could easily group all five shots within 5 inches. The S&W 640 consistently shot slightly left and 2.5 inches low.

These groups could be tighter with a slight modification of the sights. I found the rear sight notch too narrow to easily center the front sight. There was just too little space to see enough daylight. Other shooters at the range agreed. During a night-fire exercise, some commented that the groups shot using night sights were smaller because they could align the glowing tritium dots better than the edges of the sights during daytime firing.

Though snub-nose revolvers are mostly considered effective at 7 yards and closer, marksmanship can increase the effective range considerably. The key is learning how to use a double-action trigger. Positioning the trigger into the crease between the first and second segments of the trigger finger and learn how to deliver a continuous trigger pull straight to the rear. S&W’s characteristically smooth, predictable double-action mechanism will make the hits come with practice, and the 14-pound trigger weight feels much lighter when shooting. The S&W 640 is also easy to control, even when fired one-handed with .357 Magnum rounds, thanks to its full-size grip.

The 640’s ability to use moon clips significantly reduces the time it takes to reload. Speedloaders are another option, but the Safariland model I use for S&W J-frames did not fit in the 640 due to the gun’s synthetic grips. Instead, I used moon clips from TK Custom, which supplies Smith & Wesson. When carrying ammo in clips for defensive use, test fit them beforehand, because even slight bending from loading rounds into the clip will impede insertion into the cylinder.

Carrying a revolver for backup has distinct advantages, and the S&W 640 Pro Series is among the best choices available. The steel construction adds weight and cost compared to other options, but steel firearms are more durable than aluminum or polymer. If you like to practice often, trading weight for longevity may make sense. I’d change nothing on this revolver other than modify the sights. I would widen the rear sight notch and change the front sight to make the revolver shoot to point of aim at 7 yards. The Smith & Wesson 640 Pro Series revolver is also American-made and comes with a lifetime warranty. 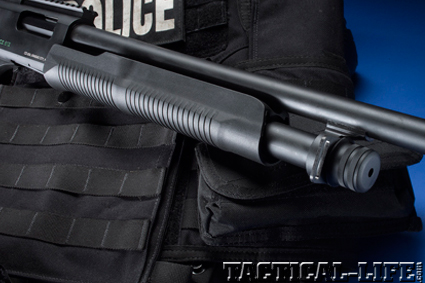