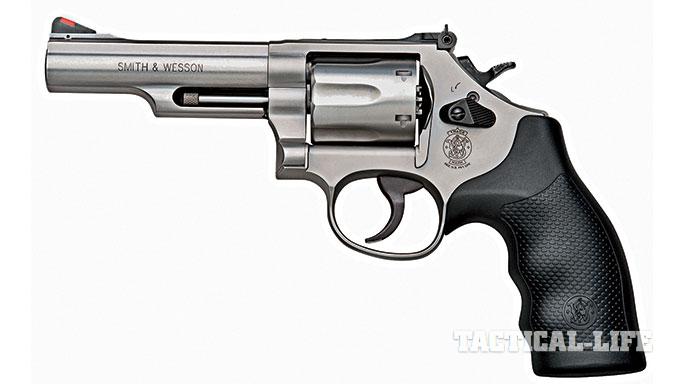 “How many of you remember the big red blob on the end of your gun when shooting under stress?” I asked in a training class not too long ago. Several of the older guys in the back of the room sat up a little straighter and raised their hands. They remembered the days when their sheriff issued his deputies the old Smith & Wesson Model 66 Combat Magnum. During the class break, those same deputies talked fondly of the old .357 Mag revolvers, and how they wouldn’t mind carrying them today.

Missing from the company’s lineup for several years, the Model 66 has returned to the Smith & Wesson catalog. Like the original revolver, the new Model 66 is chambered for one of the most effective handgun cartridges ever created: the .357 Mag. The gun will, of course, also shoot the weaker .38 Special loads.

Just like the classic Model 66 revolvers, these K-Frame guns are made of stainless steel. The front sight has the trademark red ramp, and the adjustable rear sight has a white outline.

There are a number of differences in the new guns that owners of the classic revolvers might notice. For example, current Model 66 revolver frames have round butts instead of the square butts that many of the older revolvers had. Consequently, the new guns have utilitarian rubber grips instead of traditional hardwood grips.

The Model 66 has a matte stainless finish with the trigger, hammer and cylinder release accented in black. The new guns have 4.25-inch barrels that use a two-piece design. The cylinder also uses a ball-detent on the cylinder crane, rather than on the ejector rod, to provide a tighter lockup. Comparing the new revolver to several of my older S&W wheelguns, I can say that the Model 66 is definitely tighter.

Shooting the Model 66 was a real joy. The double-action pull is smooth, while the single-action pull is crisp and as good as any factory gun I’ve shot in the recent past. Even with full-bore, 158-grain .357 Mag duty loads, the recoil is very manageable. Remington 125-grain Golden Saber rounds were easy shooting as Magnum loads go, and were very accurate to boot. As expected, the red insert in the front sight was very easy to pick up, and getting shots on target was very fast.

I don’t expect that any police department will trade in its current semi-automatic duty pistols for the new Model 66 revolvers. But that doesn’t mean these guns aren’t still exceptional guns for home defense and a little off-duty target shooting. For a few veteran law enforcers, the Model 66’s classic look and feel will remind them of a trusted partner from years gone by. 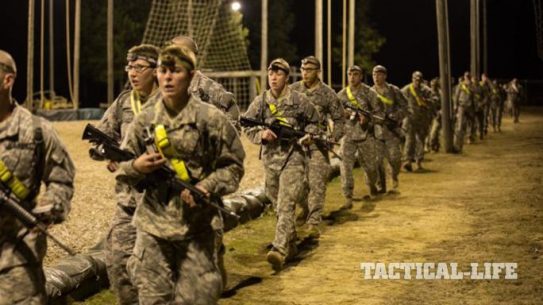 A female soldier, identified as a first lieutenant from Fort Carson, Colo., has completed...