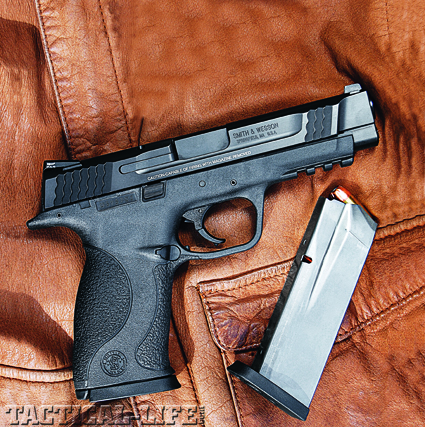 Occasionally more than a little progress-challenged, in 1972 I was leery when handed a plastic and aluminum .223-caliber battle rifle. In 1976, I thought Pachmayr’s rubber handgun grips were ugly and would never sell. In 1987, I thought a plastic Glock would never take off. In 1990, I couldn’t see how lasers on handguns could possibly go beyond gimmick status. In 1996, I couldn’t imagine electronic red dot sights ever showing up on serious combat weapons. And, in 2005, I was cautious about Smith & Wesson’s new M&P pistol introduction. The company’s older polymer-framed Sigma line had played to mixed reviews, and when the announcement came out on the new polymer pistol I instantly activated “Wait & See” Mode.

Signs were promising on the new M&P though, especially when word started circulating that the company had actively solicited input from knowledgeable people in both law enforcement and civilian markets in designing the things. There were, of course, some teething pains, but those are always expected in a new design—whether it’s a gun, a car, or a jet fighter—and five years later it looks like the platform has matured well and warrented a serious look. So, I gave it one.

GUN DETAILS
Given a choice, my preferred autopistol caliber is a .45 ACP for several reasons that include power, terminal effects even if the bullet fails to expand, ammunition availability, and ease of handloading. The caliber’s history speaks for itself, lead practice bullets grow on trees, brass is long-lived, and pressures are friendly. Not all polymer pistols are cleared for lead handloads, but the M&P is. With more variations in the M&P family between calibers, sizes, and configurations than you can track without a map, I asked for a full-sized black .45 with Trijicon Novak-style night sights, no internal key lock, no thumb safety, and no magazine disconnect. The night sights are an option, the key lock is now only included in pistols intended for sale in Maryland unless specifically requested by a police agency (not a standard feature in “normal” pistols for either civilian or law enforcement markets), and the thumb safety and magazine disconnect are also optional. In my opinion, this is the simplest and most dependable version of the M&P for defensive use.

“It Happened To Me!”

Occasionally more than a little progress-challenged, in 1972 I was leery when handed a…