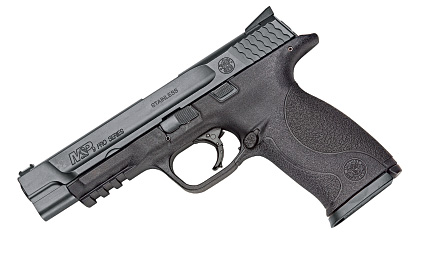 WHEN SMITH & WESSON introduced the M&P service autos, they found a 21st century pistol that did justice to its legendary namesake. The new pistol found an immediate following with the law enforcement community and the shooting public. My own department replaced our aging S&W M4586 autos with the M&P45. It has been well received by our officers who appreciate the reduced weight, smaller grip and improved trigger pull.

The M&P also found a following with competition shooters. By 2008, several of the nation’s top action shooters and IDPA competitors were running the M&P and winning matches. This included Julie Goloski, Smith’s top lady competitor. Competitors liked the M&P for the same reasons as law enforcement. However, the M&P needed some tweaking. Many wanted an improved M&P with more friendly sights and a match trigger. The demand for a little something more reached the factory in Springfield. The S&W’s Performance Center answered the call with the M&P Professional Series.

I recently received the M&P9 Professional Series for this article. Opening the standard hard case, the first thing I noticed was the extended slide. The M&P Pro has a 5-inch slide as opposed to the 4-inch slide on the service model M&Ps. The slide has a Hi-Power style bevel on the front and a relief cut that runs from in front of the cocking serrations to the muzzle. This combination gives the M&P9 Pro a sleek and balanced appearance.

The M&P series is the culmination of a great deal of research, combined with S&W’s years of experience. The M&P has a Zytel polymer frame that features a removable backstrap, called Palmswells. Each M&P comes with three different sized backstraps to accommodate the individual user’s hand size. The backstrap and frontstrap are softly stippled to provide a positive purchase. This is not only attractive but provides a more comfortable grip than the traditional “grenade” style checkering. The rear of the frame has a broad beavertail that is similar to a 1911 and allows for a very high purchase on the pistol. I was pleased to see that the M&P lacks the squared off triggerguard of other service pistols.

The slide stop/release is ambidextrous but extremely low profile and lends itself to the slingshot method of dropping the slide during reloads. In keeping with the ambidextrous features, the magazine release is a traditional single-side design that can be reversed for left-handed shooters. A stainless steel chassis is set in the frame and provides a solid foundation for all four rails for the slide bearing surfaces. The design also prevents the frame from flexing and, should it become necessary, is easily replaceable. As with all modern service pistols, the dust cover is equipped with the obligatory accessory rail with three locking grooves.

The barrel and 5-inch slide are precision machined from a solid block of through hardened stainless steel and then coated with a Black Melonite, giving both a Rockwell Hardness of 68. Curiously, Smith chose to retain the captured recoil system from the 4-inch service model. As a result, the end of the recoil spring guide is recessed in the slide tube. A hole in the back of the barrel hood serves as a view-port that allows the user to assess the condition of the chamber without operating the slide. The ejection port is enlarged and low cut to ensure positive ejection with even the softest competition loads.

While the standard model M&P pistols feature low mount Novak sights, the Pro series is equipped with a low rake rear sight and a green fiber optic front sight. The cocking serrations at the rear of the slide can be best described as scales. They provide a solid gripping surface without being abrasive to clothing and gear. The M&P sits very low in the hand and has a grip-to-bore angle that is similar to a 1911. Two 17-round magazines are included with each 9mm pistol.

Having come from the Performance Center, the Pro 9mm trigger is a vast improvement over the standard production pistols. Using my Lyman electronic trigger gauge from Brownells, I found that my issued M&P45 trigger has some rough creep in it and broke at 7.8 pounds. By comparison, the Performance Center tuned M&P Pro broke cleanly at 4.8 pounds and, after the take-up, exhibited no creep. Just as important, the reset was positive with approximately 0.25 of an inch of travel. This really improves split times during fast stages.

Since this is a competition-designed pistol, it is not equipped with a magazine safety, and a warning printed on the right side of the slide notifies the shooter. A close examination found that the dimensions of the 9mm slide and frame are the same as the .45 pistol with the only exception being the magazine well. This allows the 9mm and .45 M&P’s to use the same holsters and magazine pouches making manufacturing significantly easier.

Range Time
On the range, the 9mm was well mannered, especially when compared to my stock M&P45. While I was not able to shoot any benchrest groups, single ragged holes were the norm from normal engagement ranges. During several drills, I was able to maintain 0.17 of a second splits between shots while keeping all the shots in the “A” zone from 7 yards. The long slide tamed even the hottest 9mm loads and the fiber optic front sight was easy to follow during recoil.

The factory specifications call for the Pro to maintain 3-inch groups at 25 yards. However, I have no doubt that the Pro will shoot sub-2-inch groups at 25 yards with the right loads. I also ran several drills using a BlackHawk SERPA holster. Myholster was for a 4-inch model so the longer slide extended from the end of the holster. This did not present any problems during the range time and, after warming up, I had no trouble with 1-second presentations.

Smith & Wesson’s Performance Center is known for their refined wheelguns, PPC autos and enhanced 1911 pistols. With the addition of the M&P Pro, S&W now offers an affordable pistol that a law enforcement officer can purchase straight off the shelf. Should you be in the market for a duty pistol, or just a great shooting 9mm auto, the M&P Pro 9 deserves serious consideration.

WHEN SMITH & WESSON introduced the M&P service autos, they found a 21st century…