Smith & Wesson has just released the Shield—a polymer frame sub-compact pistol in the M&P line that comes in 9mm or .40 S&W. The Shield was conceived to fill a growing segment in the concealed carry market for a sub-compact, single-stack pistol chambered in 9mm. Slim sub compacts (less than 1-inch thick) had been the province of the .380 caliber autos, but the market now wanted a similarly sized pistol in 9mm.

Smith & Wesson’s product launch of the Shield was well planned. The company did not want to announce a new product only to have inadequate supplies to meet demand, nor did it want to ship pistols but leave customers waiting to buy accessories for them. Therefore, S&W secretly built up a good supply of 9mm Shields and kept them in storage prior to the launch date of April 2012 at the NRA Convention, and under a confidentiality agreement sent actual-size plastic models months in advance to holster and sight makers to allow them to get their products ready to launch on the same date as the Shield. Because of this planning, molded holsters are now available from DeSantis, BlackHawk, Galco and others. Since the Shield is so slim, inside-the-waistband holsters are typically the best bet for most users. 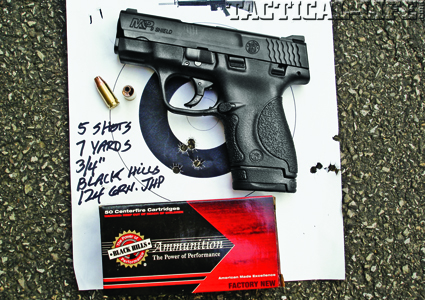 The Shield weighs 18.5 ounces and measures a compact 0.95 inches wide, 6.1 inches long and 4.6 inches high with the flush fitting magazine. Capacity of the 9mm and .40 caliber versions is 7+1 and 6+1 respectively, using the flush fit magazine while carrying one more round for each caliber using an extended magazine that comes with the pistol. Though it is classified as a single-stack, the Shield manages to fit one more round in its longer magazine by slightly staggering the cartridges compared to a pure single stack magazine. Because the Shield has a firing pin safely, the pistol can be safely carried with a round in the chamber. This device captures the firing pin, keeping it away from primer until the trigger is pulled—even of the pistol is dropped on the muzzle.