As its name implies, the Smith & Wesson M&P10 LE was designed specifically for law enforcement with a pencil-thin, 18-inch barrel, a stock single-stage trigger and a non-free-floating handguard. It’s an honest .308 Winchester/7.62mm NATO AR that packs quite a punch while being maneuverable in tight, confined environments, such as inside of apartment buildings or vehicles. But at a recent media event sponsored by S&W, Hornady and NRA Outdoors, I was able to push the M&P10 LE way beyond the limits for which it was intended—out to 1,000 yards—and found it exceeded my expectations.

The M&P10 is a big-bore rifle that uses the traditional direct-impingement operating system. At first glance, it looks similar to other .308/7.62mm ARs, but there are a few subtle differences at work here, including the large, six-port flash suppressor screwed onto the end of the muzzle that is designed to cloak the signature of 7.62mm rounds while reducing muzzle rise. The flash suppressor is a proprietary S&W design. 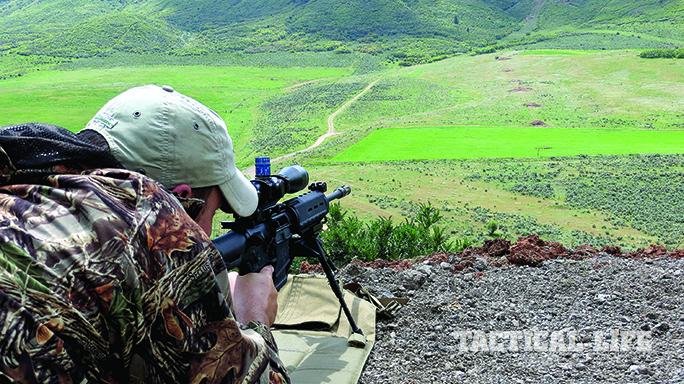 The “pencil”-style, 18-inch barrel is also noticeably skinny, which made me wonder what kind of accuracy the rifle could produce after the barrel heated up from sustained fire. When I learned that the barrel did not float freely within the Magpul MOE handguard, I assumed the worst. Thankfully, a reality check jolted me out of my preconceived notions—but let’s not get ahead of ourselves. More on that later.

The barrel has a 1-in-10-inch twist rate, which allows it to stabilize most any bullet weight in this class. The gas block is clamped onto the barrel, and it sports a flip-up Troy front sight as well as a bottom sling swivel. The upper receiver itself is a flattop design with plenty of Picatinny rail space to mount an optic. Smith & Wesson also includes a flip-up Troy rear sight, a standard charging handle and a forward assist.

The lower receiver is unique in that the safety selector, magazine release and bolt release are all ambidextrous. While the controls are essentially mirrored for familiarity, the left-side magazine release lever is a small serrated paddle that makes for easy reloads. The internal components, including the hammer and trigger, are all mil-spec. The enlarged triggerguard, integral to the lower, provides plenty of room for shooters wearing gloves. Also, coarse serrations are machined into the front of the magazine well for those shooters who like to grasp the rifle in this position.

While the M&P10 LE normally comes with a six-position-collapsible Magpul MOE stock, the dozen or so test models at this particular media event were fitted with fully adjustable Magpul PRS stocks, allowing shooters to fine-tune the cheek height and length of pull.

These M&P10s were also fitted with Caldwell bipods and Huskemaw 3-12x42mm Blue Diamond scopes with Hunt Smart reticles. This reticle is similar to a duplex design, but it has extra aiming hash marks that form the shape of a football on the horizontal stratum. These marks denote wind holds in MOA, and they’re unique to Huskemaw scopes. By dialing the blue elevation turret numbers at the bottom of the turret to a known distance, then reading the MOA wind value number at the top of the blue turret, you can determine the correct wind hold. The wind values on the turret are calibrated in 10-mph increments.

In practice, the system is super simple. Range your target—say 702 yards—dial the turret to “7” for 700 yards, above the 7 on the turret is the MOA wind value number, which is “3” for 700 yards. This means, shooting into a 10-mph wind at 700 yards, a shooter must shoot count three hash marks over on the reticle’s horizontal stratum. If the wind is less—say 5 mph—you simply cut the MOA wind value number in half.

The media event was set up as an NRA Outdoor long-range hunting course. So before we started to heat up those barrels, the NRA instructors gave us a few pointers, showing us how to adjust the scopes and shoot using bipods and shooting sticks. We had cartons of 168-grain Hornady A-MAX ammunition at our disposal. And I honestly thought we’d only be shooting out to 400 yards, but that was actually the starting distance. Instead, the range continued in 100-yard increments all the way out to 1,000 yards.

We started with some benchrest shooting to get acclimated to the M&P10s and get our dope. It soon became clear that these rifles could be pushed hard. Our targets were white 18-by-18-inch steel plates, and two triangles set in an hourglass shape were spray-painted on each target. With my spotter, L.P. Brezny, a distinguished long-range shooter and hunter in his own right, at my back, it was easy to shoot groups on the 400-yard targets. Then we moved to shooting mats for some prone shooting out to 500 yards. Again, it was easy to tag these targets with some help from a Caldwell wind meter. Fully loaded with the scope and bipod, the M&P10 LE came close to 10 pounds, so the felt recoil was negligible. It didn’t take long for us students to build our confidence and start pounding steel out to 600, 700, 800, 900 and 1,000 yards.

The next day we moved to a new location to shoot at targets set at unknown distances. Each spotter ranged the targets and called the wind, then gave each shooter the command to “send it” while they watched for hits or misses. Though we weren’t shooting groups per se, I was really impressed with the M&P10 LE’s performance. No matter the distance, the rifle kept working, kept hitting. Half of the credit should be given to the Hornady ammo, which was very consistent out of these ARs. The Huskemaw scopes proved to be super simple to use and consistent even with the rifles’ constant pounding.

We pushed these rifles to their limits. I was waiting for a big fall-off in terms of accuracy at distance, but it never happened. The rifles performed well in the hands of inexperienced and experienced shooters alike, and essentially leveled the playing field among students. My rifle also ran flawlessly between the two days of shooting without any cleaning or maintenance performed during that time.

Seeing steel swing at 1,000 yards is mighty satisfying, and the M&P10 LE breeds confidence at every turn.