0
SHARES
503
VIEWS
Share on FacebookShare on Twitter
The lower receiver of the M&P15 Sport, emblazoned with the S&W seal, features standard AR-style controls.

The unfortunate truth is that many law enforcement agencies, large or small, are strapped for cash. Firearms are just one of the many line items on the budget, and whether they are outfitting a couple of officers or the entire department, money matters. Smith & Wesson catalogs 17 different M&P15 rifles for law enforcement use. The least expensive (non-rimfire) rifle in this line is the M&P15 ORC (Optics-Ready Carbine) with a suggested retail price of $1,069. That is, until now, with the introduction of the S&W M&P15 Sport 5.56mm.

The M&P15 Sport is not cataloged as a law enforcement rifle, but that isn’t an issue. At the basic level, a patrol or tactical carbine for law enforcement only needs to be reliable, accurate and compact enough to answer the call. The idea behind the M&P15 Sport was to offer a high-performance AR at an affordable price, and S&W has accomplished this. The suggested retail is a surprising $739.

This is indeed a bargain, regardless if you are comparing the M&P15 Sport to other S&W rifles or rifles from other manufacturers. I recently built an AR-15 similar in configuration to the M&P15 Sport using the least expensive parts I could find. The total cost was just a shade over $600. The difference is that this firearm was cobbled together with parts from various manufacturers and had no implied comprehensive warranty. With the S&W M&P15 Sport, you know you are buying a rifle that a reputable manufacturer will stand behind.

Did Smith & Wesson cut corners to get the M&P15 Sport priced so low? That’s a valid question. However, it’s not the case. The S&W M&P15 Sport does differ in several ways from the rest of the rifles in their line, but as far as I am concerned, some of these differences are actually upgrades, features that make this rifle not only unique but as good as—if not better—than more expensive alternatives. 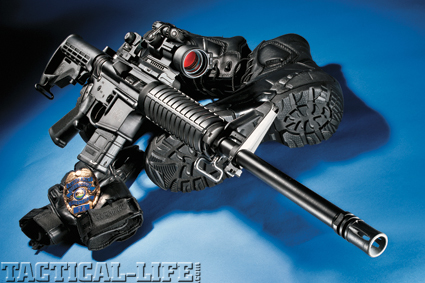 The S&W M&P15 Sport is the affordable, mission capable AR many law enforcement agencies have been waiting for. Shown here with Aimpoint PRO red dot optic.

With the Sport, S&W took a different approach to this problem. After all, there is no reason a rifle at any price should be uncomfortable to shoot. By forging an integral, full triggerguard into the lower receiver, S&W eliminated this issue completely. There are no gaps, recesses or anything else to attack your fingers or knuckles. It creates a very comfortable grip. If it were left up to me, this new lower receiver would become the standard receiver for all S&W M&P15 rifles. It’s that nice. 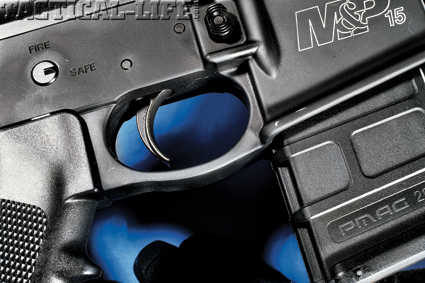 Maybe the best feature of the M&P15 Sport is the triggerguard, which is integral to the lower receiver.

With the exception of the M&P15 Sport, all other centerfire S&W M&P15 rifles have chrome-lined bores. This is not an inexpensive option but one that many consider a must with ARs. However, S&W coats the inside of the Sport’s barrel with Melonite, a coating designed to increase the fatigue strength of notched parts by as much as 100 percent. It is also very corrosion resistant, which is not a bad thing for a firearm that is carried in a patrol car much more than it is shot. In tests, S&W found that AR barrels treated with the Melonite coating had a service life comparable to if not longer than chrome-lined bores. It’s less expensive, and if we take S&W at their word, just as durable. The gas key and gas tube on the M&P15 Sport are chrome-lined.

The use of 5R rifling is another difference between the M&P15 Sport and other S&W M&P rifles.

Thompson/Center, a partner with S&W, has aggressively studied different rifling options commonly used and how they perform. According to Thompson/Center, 5R rifling improves consistency and accuracy. For that reason, it’s the rifling method they use in their great-shooting centerfire rifles and it’s one feature that sets them apart from the competition. 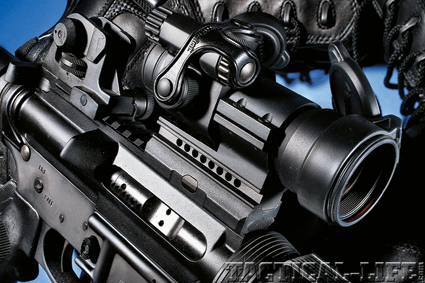 The flattop upper of the Sport is ready to accept a red dot sight that can be co-witnessed with the open sights.

5R rifling was developed in Russia and uses five lands and five grooves instead of the traditional six. Another difference is that the sides of each land are cut at a 65-degree angle versus the 90-degree angle found with
standard rifling. And, finally, each groove is also directly across from a land on the opposite side of the barrel. It is believed that this configuration helps reduce bullet distortion and deformation. A lesser-deformed bullet jacket means less fouling and less fouling means longer runs between cleaning and better shot-to-shot consistency.

The last notable and most visual difference in the M&P15 Sport from most Mil-Spec or law enforcement-type ARs is the absence of a forward assist. An early addition to the AR platform, the forward assist was designed to help ensure that the action is fully closed. It is still a viable feature, especially when ARs are used in extremely dusty or dirty situations where maintenance sessions are few and far between. Except in rare or extreme conditions, this does not apply to the law enforcement application of an AR, however.

If a law enforcement officer encounters a round that is not fully chambered, he can simply work the action and kick it out. More than likely, particularly considering the cleaner environment most cops work in, a failure to chamber will more likely be the result of bad ammunition. And, if that is the case, a forward assist will be unlikely to correct the problem. By eliminating the forward assist on the M&P15 Sport, S&W slightly reduced the rifle’s weight and greatly trimmed its appearance. Some may consider it a detractor; I think it was a good call. 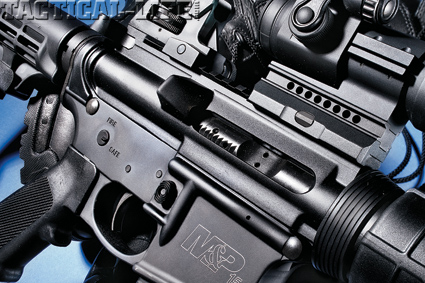 The lower receiver of the M&P15 Sport, emblazoned with the S&W seal, features standard AR-style controls.

Like most M4-style carbines, the M&P15 Sport is configured with a rugged, fixed front sight and a two-piece, military-style handguard. The upper receiver is topped with an integral Picatinny rail. Out of the box, the carbine is fitted with a quick-detach rear sight that is adjustable for windage and elevation. This will give officers the option of open sights, open sights co-witnessed with a red dot sight or a red dot or conventional scope alone. It’s true that the front sight can cloud the view through low power optics, but at about 4x magnification it almost disappears.

The rest of the M&P15 Sport is, for the most part, pure M4 in design. There’s even a bayonet lug. The only remaining exception would be the straight taper on the barrel, which is 16 inches long with a 1-in-8-inch twist — a twist that should work well with about any bullet weight currently available in tactical ammunition.

The stock is the standard, six-position collapsible stock found on various other M&P15 rifles. It has a sling attachment point at the butt and there is also a sling attachment just in front of the handguard. For law enforcement use, I believe a single-point sling attachment is a good idea. It allows an officer to drop the rifle for transitioning to a handgun or for various other chores not necessarily common to sport shooters or hunters. This, of course, would add cost and is something the end user can easily add on. 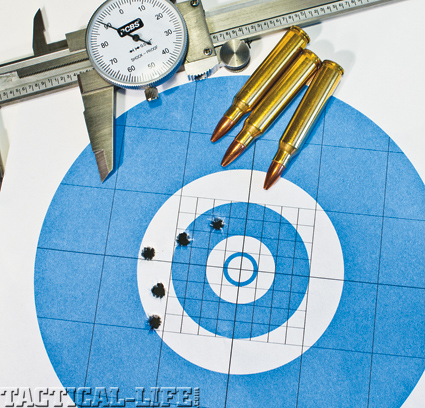 Range Time
While testing the M&P15 Sport, I fired 300 rounds. About 100 rounds were fired from the bench during zeroing, familiarity and accuracy testing. The rest of the ammunition was burned up on the range on steel and paper targets while conducting some carbine drills and just having fun. There was not a single stoppage, jam, failure to feed or to extract during the entire test procedure.

During the accuracy testing, I probably put the M&P15 Sport at a disadvantage right from the start by mounting a red dot sight. This is not the best optic for accuracy evaluation, but I wanted to run the gun like it might actually be employed in the field. Groups ranged between 1 and 2 inches, which is fairly common for carbine-length ARs. I was not able to fire a sub-MOA group with the three loads used, but I came pretty darn close with two.

In conjunction with the red dot non-magnifying optic, the M&P15 Sport’s trigger could have played into the accuracy results, too. It tripped crisply at 6 pounds but there was a noticeable amount of over-travel. Cops should not mind—they are used to less-than-stellar triggers, but the trigger on the M&P15 Sport (or any AR for that matter) can easily be corrected with a drop-in Timney unit.

Final Notes
I’m impressed with the S&W M&P15 and not just because of its price. I like the triggerguard on the lower receiver, the absence of the forward assist and I have no problem at all with the 5R rifling or the Melonite-coated barrel. This new carbine gives individual officers or agencies with a tight budget a chance to get their hands on an M&P15 at a very affordable price. Considering the reputation of S&W M&P rifles, I say “10-4” to the S&W M&P15 Sport. To find out more, visit smith-wesson.com or call 800-331-0852.