Ready to blend in thanks to its Realtree APG camo exterior, this M&P15 rifle was built to fire both .300 Whisper and 300 Blackout rounds without missing a beat.

Easing along the creek bottom, I was 300 yards shy of the base of the ridge I would have to climb to try to catch up with a buck that had left plenty of early season signs. A sudden sound halfway up the ridge to my left caused me to freeze and snap my head in that direction. It was too loud, and it certainly wasn’t a squirrel. It wasn’t a deer or turkey, either. It only took a couple of seconds to identify the critter making the disturbance. I raised my rifle and centered the offending armadillo in the crosshairs.

The .300 Whisper coughed once, and I heard the bullet impact with a solid “thwunk.” The varmint rolled down the hill and came to rest about 10 feet from where I stood. One more leprous Southwestern invader had bit the dust. I kept right on stalking up the creek bottom toward my stand, pleased with the benefit of hunting with a suppressed weapon.

Animal damage control, or just whacking varmints, is one of the areas in which the .300 Whisper shines. And Smith & Wesson’s decision to chamber its M&P15 rifle in J.D. Jones’ brainchild makes perfect sense, as did dressing it in Realtree AP camouflage. 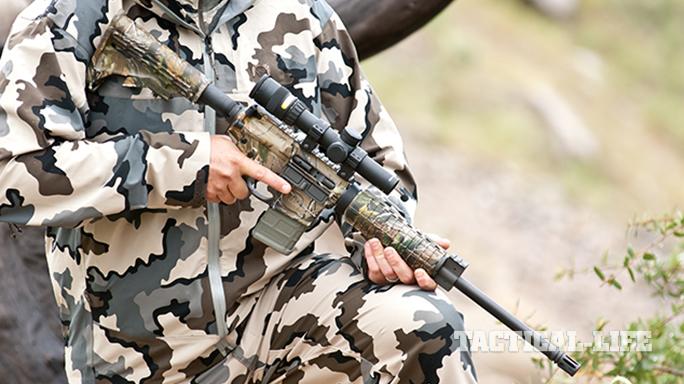 It’s been nearly 20 years since I first met J.D. Jones. I had a rental car, and J.D. needed a ride to a pre-SHOT Show press event in Las Vegas. As he read the hand-drawn map and navigated, we talked guns. He shared news of his recent work with the subsonic suppressed rounds he was building for the military and other government agencies. He talked about the Whisper family of cartridges.

One of the rounds he told me about was the .300 Whisper. Jones had some criteria for the small .30-caliber round; it had to be a multi-purpose cartridge capable of exceptional accuracy out to 200 yards with both heavy, high-ballistic-coefficient bullets at subsonic velocities and lightweight bullets at Mach 2. “We’ve been providing the .300 Whisper to the military for a number of years,” Jones said. “It’s been in use by the military and a lot of other three-letter agencies.”

More than a decade ago, fellow shooting enthusiasts Gary Cook and Charles Stanfield introduced me to the .300 Whisper. Now retired, Cook was the Tennessee Wildlife Resources Agency’s top cop in charge of wildlife management and protection for all of western Tennessee. Through the course of a wildlife officer’s career, he or she will be required for a number of reasons to shoot wild animals. Each summer, hundreds of whitetails must be killed statewide to take biological data that is used to set harvest regulations for the following season. Most of the deer are collected at night. Every year, the biologists and officers noisily shooting high-powered rifles after dark cause the poacher hotline to be flooded with phone calls from concerned citizens. The solution Cook chose was to arm his officers with suppressed rifles chambered in .300/.221 Fireball, the .300 Whisper’s illegitimate twin.

Smith & Wesson’s M&P15 in .300 Whisper is versatile to the extreme. As previously mentioned, it functions well with heavy subsonic loads and needs only a magazine change to swap to lightweight bullets traveling twice as fast. Another aspect of the M&P15’s versatility is that its chamber also allows for firing the 300 Blackout cartridge. The barrel is actually marked “.300 Whisper/300 Blackout.”

Starting at one end and moving to the other, the rifle has a six-position-adjustable buttstock decked out in Realtree APG camo. The pistol grip is an A2-style unit with a matching camouflage finish. The upper and lower receivers are camouflaged in this pattern, with the S&W roll mark, model and “fire” and “safe” engravings filled with white paint. The upper and lower receivers are forged from 7075-T6 aluminum, which is pretty standard for an AR.

The fire control assembly, safety, magazine release button, bolt release, forward assist and charging handle are mil-spec in color and dimensions. The upper receiver is a flattop design with a Picatinny rail. The bolt carrier is a semi-auto AR-15 type, and the fire control group is of the semi-auto variety.

Moving forward, the M4-style handguard is held in place with a black castle nut. The handguard lacks an internal metal heat shield. The barrel measures 16 inches long and is heavily contoured, which should bode well for accuracy. The M&P15 features feed ramps, and its gas system is optimized to efficiently run both suppressed and unsuppressed with a full range of factory-loaded sub- and supersonic ammunition.

The barrel features 5R rifling in a 1-in-7.5-inch twist rate. Most of the 300 Blackout barrels I have fired had 1-in-8-inch twist rates, which is adequate for stabilizing 220-grain Sierra MatchKing bullets. The M&P15’s faster twist rate should handle 240-grain bullets well. The barrel is made from 4140 steel and is Armornite-coated for increased corrosion resistance. The gas key and the interior of the bolt carrier feature chrome plating for additional corrosion resistance.

The gas block, set in the carbine position, has two features shooters should like. On top, it has a Picatinny rail for mounting a front sight. On the bottom of the gas block is a recess for mounting a flush-cup sling swivel. This is a great feature, although it is a mismatch with the M4 buttstock’s mil-spec sling loop.

The muzzle has 5/8×24 threading to accept the included A2-style flash suppressor or a sound suppressor. With the stock retracted, the overall length measures 32 inches; fully extended, the rifle is 35 inches long. Even with its heavy barrel, this rifle tips the scales at a trim 6.6 pounds unloaded.

To set this rig up for hunting, I mounted a Trijicon 1-4x24mm AccuPoint scope. This optic is an excellent low-light performer, helping the user squeeze in another 10 minutes of shooting time between daylight and dark. It’s a little on the low-power side for shooting precise groups at 100 yards, but I have successfully used this optic when testing other AR-platform rifles and been able to produce sub-MOA clusters at its highest setting.

The range-testing portion of this review was conducted from a steady bench. I recorded each load’s velocity data by firing 10-shot strings across an Oehler 35P chronograph from a 10-shot string. To get an idea of M&P15’s accuracy potential, I fired four 5-shot groups with each load at 100 yards. In keeping with this rifle’s “Whisper” nomenclature, I attached an AAC Cyclone suppressor for the accuracy testing.

Since this rifle fires both .300 Whisper and 300 BLK rounds, I started with a factory load of the latter: Remington’s subsonic, 200-grain 300 Blackout SMKs. This load averaged 993 fps. The extreme spread was 142 fps, and the standard deviation was just under 40 fps. The smallest five-shot group at 100 yards measured 1.09 inches.

Remington’s 125-grain 300 Blackout load averaged 2,234 fps. The standard deviation was 14 fps, which was noteworthy. The extreme spread was 47 fps. Consistent with the relatively low standard deviation, this load’s best group was 0.98 inches. The remainder of the groups hovered around 1.5 inches in size.

Next up were some .300 Whisper loads. Hornady’s 208-grain, subsonic A-MAX ammunition averaged 1,017 fps. The extreme spread was 44 fps while the standard deviation was 12 fps. The smallest 100-yard group measured just 0.79 inches center to center, which makes sense, since this was the smallest standard deviation for any of the loads tested.

Stepping up to the supersonic factory loads, Hornady’s 110-grain V-MAX averaged 2,311 fps. The standard deviation was 38 fps, and the extreme spread was 121 fps.

The single handload I tried in this rifle drove a 210-grain Sierra MatchKing bullet to 1,041 fps with 9.3 grains of H110 and Federal Small Rifle Match primers. The extreme spread was 93 fps, and the standard deviation was 39 fps. The average group size was 2.42 inches for five shots at 100 yards. The smallest group measured 2.23 inches. 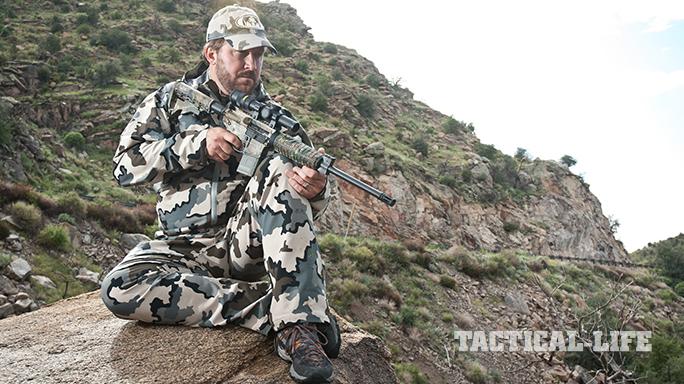 Further load development should find a recipe that will produce groups that hover around the 1-MOA mark for both subsonic and hypersonic loads. In addition to the slow-fire groups, I alternated shooting a 20-round magazine of the fast loads with a magazine-full of subsonic loads. I even fired 100-yard groups with each load with the suppressor removed to learn where the rifle’s point of impact was in comparison to shooting it with the suppressor attached. As predicted, the groups moved upward approximately 2.5 inches and right about 1.5 inches.

This mimic results I’ve produced elsewhere shooting the same caliber with other ARs chambered in either 300 Blackout or .300 Whisper.

On average, this M&P15 in .300 Whisper will produce a 1.8-MOA five-shot group at 100 yards across a wide range of factory loads. With the proper ammo, this is more than adequate for tagging deer-sized game and varmints out to 200 yards. Simply put, the M&P15 is fun, and it’s a great platform for delving into shooting suppressed weapons.

For more information about the M&P15 .300 Whisper, visit smith-wesson.com.