Performance and precision are arguably the two most important factors when it comes to choosing a rifle, especially a self-loading model. Yes, looks are nice, but looks don’t count for much if you can’t count on your rifle to shoot every time you need it to.

During the last two years Smith & Wesson has set the black rifle market on its ear with the introduction of their M&P15 series. There are numerous models in the category and the one featured herein is their “PC” or Performance Center version. 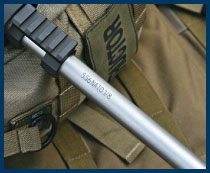 Numerous features set this rifle apart from its carbine cousins. First and foremost is the fact that it is genuinely a rifle, not a carbine length gun. Top on the features list is the full-length 20-inch stainless steel barrel with 1-in-8-inch right hand rifling. The rifling is designed to achieve maximum performance from heavier match grade ammunition. Surrounding the barrel is a free-floating Yankee Hill aluminum handguard. Under the forward handguard is a single sling mount for a swivel or bipod.

As this is a precision shooting instrument, no iron sights are included. Instead, the upper receiver is a flat-top version and is ready to ac-cept whichever optic you choose. However, should you choose to mount iron sights on the rifle, the gas block does have a Picatinny rail.

Down on the lower receiver you will find an A2-style fixed stock. The pistol grip is the very comfortable Hogue model. The lower is standard AR and will accept all magazines for that design. The PC model comes with one 10-round mag.

The heart of the action is the trigger mechanism. In this case, S&W has installed a two-stage match trigger with a very crisp 4.5-pound pull. Internally, the bolt and bolt carrier is true AR, and disassembly for cleaning is identical to any rifle in this class. The M&P15 PC has a standard black/parkerized finish. A camouflaged factory version is available with the same features as the model on display here.

Optics Selection
For this project I decided to use a fixed power optical sight, the scope was a “Super Sniper” model. The scope was purchased from SWFA. This piece of glass is a fixed 10-power with Mil-Dot reticle. Windage and elevation knobs are ¼-MOA adjustable and the tube is 30mm. Focus for the scope is a rear/focal lens adjustment.

To mount the scope of the flat-top receiver I ordered a quick detach platform from LaRue Tactical. This particular mount is cataloged as their LT-104. The LT-104 has a twin throwlever, one of which locks the mount in place. As per usual, LaRue included an adjustment wrench and a small tube of blue Lok-Tite.

Range Time
Before I left for the range I took a moment to rough zero the scope with my laser bore sighting tool. The model I use most comes from LaserLyte. Modern laser-based tools such as this one are real time and money savers. Once at the range you will save time and ammunition you used to waste trying to get on paper.

For my first range session I would zero the glass at 100 yards with the Wolf Gold 75-grain BTHP (boat tail hallow point) load. Wolf Gold is brass-cased ammunition versus the lacquered grey steel commonly associated with the brand.

Chronographing chores were completed first and no real surprises were to be had. Bullet speeds from the 20-inch barrel were what I expected. They all hovered in the 2600 to 2700 feet per second (fps) range. History has shown that the velocity you give up over the lighter rounds is more than made up for by consistent accuracy.

I expended about 10 rounds zeroing and then confirming the scope settings. The external adjustment knobs on the scope made the zero process a breeze. Of the five different loads I tested all grouped within an inch or so of each other, with the exception of the Hornady load. For whatever reason, this load grouped around 2 inches low and right of the original zero.

While not a critical issue, it does illustrate how different loads will vary in your rifle. The trick is to test out several and pick the one that works the best for you. The Black Hills 69-grain MatchKing load squeaked out the best load with a 0.70-of-an-inch three-shot pattern from 100 yards. Federal’s 77-grain BTHP was close behind at 0.75 of an inch.

To test the reliability of the scope/mount setup I removed the QD mount after the first session and cased the rifle up in the BlackHawk Long Gun Pack Mat. This particular bag is both a gun case and shooting
mat. It has numerous storage compartments and can be carried with standard handles or pack straps.

When I arrived at the range a week later I removed the rifle, attached the scope and rested the rifle on a couple of sandbags. I was extremely pleased to see the first round down range cut the “x” on the Shoot-N-C target 100 yards down range.

Adding a bit more fun I moved down the firing line a bit until I could sight in steel reactive targets set out at 200 and 350 yards. With the rifle still zeroed for 100 yards I used the Mil-Dot reticle to establish a quick hold over. I was able to clang the 200-yard 6×6-inch swinger with the first shot. It took a round or two to verify the correct hold at 350 yards but once I did, the rifle put rounds on target with predictable regularity.

Shooting accurately or precisely is a very simple matter, at least as it is written. Regardless of the particular gun used, there are a few basic fundamentals that must be applied for each and every shot. These aren’t secrets that have been closely guarded by a clandestine society since the time of the flintlock.

Basic marksmanship fundamentals are discussed in most every introductory firearms course taught by the NRA or 4H Shooting Sports. I have taught these principles to ten-year-olds all the way up to senior military personnel.

The secret to consistent accuracy, if there is one, is not knowing fundamentals but employing them for each and every shot you take. Anyone can hit the bull’s-eye once in a while. You may have heard the phrase about the blind squirrel finding a nut. Hitting the bull time and time again with regularity requires the disciplined application of all the basics.

A friend of mine reminded me that good shooting is simply mastering the basics. Among these basics are deliberate, undisturbed trigger presses while maintaining sight alignment. Those are achieved through breath control, stock weld, and natural point of aim among others.

The temptation with a semi-automatic rifle such as the M&P featured herein is to believe that you always have extra ammunition in reserve to make up for a bad shot. Somehow we deceive ourselves into believing that more rounds will compensate for poor marksmanship.

I shouldn’t have to remind you that you can never miss fast enough to catch up and that the first shot you take is most often the most important one. A semi-automatic precision rifle affords you the opportunity to rapidly fire accurate shots in succession, not make up for misses.

Final Notes
During my testing of the M&P15 the rifle functioned flawlessly with several different brands of ammunition. During the review I used the 10-round magazine supplied with the rifle and a couple of 20-round magazines from Brownells. All fed the gun reliably.

At one point I tried out some military surplus 62-grain 5.56mm. The ammunition functioned without a problem but the tightest group I could achieve was around 2 inches. You could use it in a pinch but that’s not what the rifle was designed to fire.

When discussing firearm priorities, reliability is number one on the list; next comes precision, and lastly we can concern ourselves with looks. The M&P15PC rifle has all three of those areas covered.