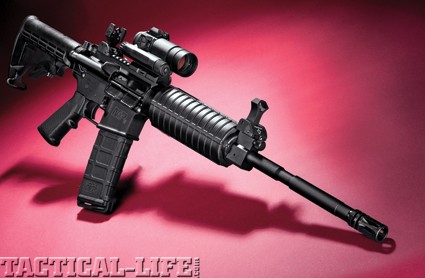 The M&P15PS takes the classic AR-pattern and adds a piston system of operation. Shown equipped with Diamondhead folding sights and Aimpoint CompM4.

I WAS PROBABLY NOT THE RIGHT GUY TO ASK to look at a piston-system converted AR. While I’m aware of all the voices from the sandbox calling for an end to direct gas impingement system (DGIS) guns due to stoppages, I get the precisely same number of voices from the same locales who say that the gun works fine. It’s about like the ongoing cartridge debate that’s seemingly unending. If it were you and one cartridge in the rifle that separated you from imminent death, would you prefer 5.56mm, 7.62x39mm, 6.8 SPC or 7.62x51mm? Personally, I’d want all the megatons I could muster—at least it would be that way until we had to clear buildings or to walk long distances, then I’d have to look at the envelope. 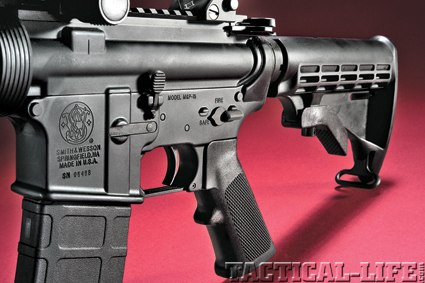 Externally, the M&P15PS features all the standard controls of the AR, making a transition to the rifle simple.

Same with the rifles … . If there’s a chance—any chance—it might puke due to dust and debris, get me something known for reliability. However, when I counseled a friend to get something like an AK with greater reliability when he got “over there,” he pointed out that, regulations violations aside, if you see someone with an AK their likely hostile. Not all the time, as there are friendlies with AKs – but why take the chance of catching friendly fire? 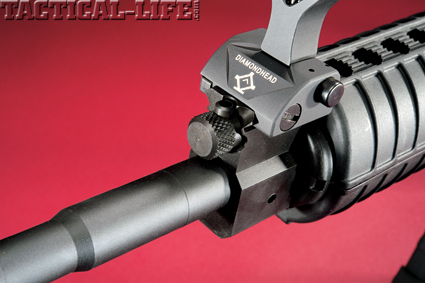 The adjustable gas system of the PS allows you to adjust it for either reduced gas flow-through or no gas flow at all.

As a little background, DGIS takes gasses vented from the fired cartridge into a tube that runs back toward the receiver. In the receiver there’s a “gas key” atop the bolt carrier. The gas impinges on the gas key, driving the BCU back and allowing extraction, ejection, cocking to take place. The countervailing pressure on the buffer drives the bolt carrier unit forward to strip off and chamber a fresh cartridge as the bolt locks into the barrel extension. All that gas running back into the receiver deposits carbon, burnt powder particles and other gunk on the working parts. 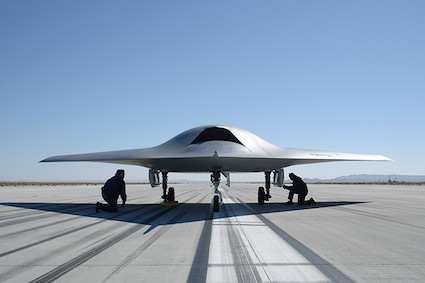 The M&P15PS takes the classic AR-pattern and adds a piston system of operation. Shown…