0
SHARES
144
VIEWS
Share on FacebookShare on Twitter
Viking Tactics and M&P markings are boldly displayed on the right sight of the lower receiver. For greater precision, Smith & Wesson chose to install a Geissele Super-V trigger, which was crisp, predictable, and had a sharp reset. Its average pull weight was just over 5 pounds.

The M&P15 line of rifles was a bit of a surprise to me when Smith & Wesson first offered them. An associate had once opined that if he had the money, he’d have purchased Smith & Wesson and begun with a line of AR-15 rifles. At the time, the field wasn’t so crowded and there was pent-up demand from the Clinton Gun Ban. Since then, anyone who has access to shop space and an instruction book can and has assembled parts. Meanwhile, S&W has delved deeply into the AR-style rifle by pulling some outside ideas in, like the Adams Arms piston system, and by making their own components, thereby using more of the expansive manufacturing space they have available. 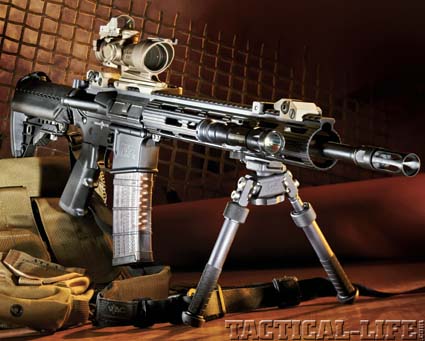 Aside from sights and a light, the S&W M&P15 VTAC II comes with everything you need—even a sling and light mount. Shown with a Trijicon 4×32 ACOG with Docter sight, SureFire Scout Light and Atlas bipod.

In any event, S&W is unquestionably a major player in the AR market, continuing to expand their listings of product as well as market share. It seems that the current trend is to get “someone” to design an AR for you—the more Special Operations experience in the designer’s background, the better off you are. One such venture was the S&W M&P15 VTAC rifle. A collaboration between noted Army Special Operations SGM Kyle Lamb and S&W, the VTAC made use of some of the best parts available at the time from JP Enterprises, SureFire and Lamb’s own Viking Tactics (VTAC). It was immensely popular. Apparently, they felt things had changed enough in the field of components to advance the ball further down the field with a new edition, the VTAC II.

Gun Details
To start with, the new rifle would utilize a different gas impingement system than the original carbine, a so-called “mid-length” gas system. Around for years, many generally avoided it for the lack of handguards to cover such a system. Besides, the original gas system works, right? Well, it can. It’s rough on extraction for one thing. It’s an abrupt system. When you have components best used in the 20-inch rifle format used in the 16-inch-and-less carbine format, you end up with short-lived parts and failures to extract, especially as operating temperatures increase.

My first AR carbine used a mid-length gas system. I didn’t know any better. People who shot it “oooed and ahhed” over how “softly” the system shot. It was simply a better system for the 16-inch gun—better balanced in operational cadence and gas flow. The mid-length VTAC II features a 16-inch barrel made from 4150 CMV steel with a 1-in-8-inch twist rate. S&W’s 5R rifling came from their Thompson/Center acquisition.

The idea of 5R rifling is to use five lands and grooves instead of the traditional six lands and grooves. In addition, the sides of each land are cut at a 65-degree angle versus the 90-degree angle on standard rifling. In effect, this causes less bullet deformation and fouling. With 5.56mm rounds, the heavier bullets require a faster rate of twist, hence the one turn in 8 inches of the VTAC II.

The barrel, bore and chamber are all Melonite treated. S&W has been testing Melonite barrels with the intent of destroying them. So far, the Melonite barrels are still going. The barrel is covered by the VTAC/Troy Extreme TRX handguard. It’s light and reasonably skinny. The venting/lightening holes are elongated in the horizontal plane from the muzzle to the buttstock. For mounting goodies, Picatinny rail sections can be mounted in the cooling slots. The top rail runs the length of the handguard. The M&P15 VTAC II comes supplied with a pair of mounting rails. 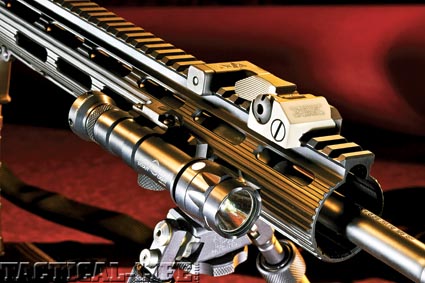 Smith & Wesson also anointed the new VTAC II with a new flash suppressor. This one was made to direct blast and sound forward, away from the shooter, while cutting visible flash. The VTAC II also comes with the Vltor IMod six-position collapsible stock. Coming from a great name in the modern sporting rifle market, the stock extends the rifle to a maximum of 36.75 inches and collapses it to 33.5 inches.

The M&P15 VTAC II is shipped with a Geissele Super-V trigger installed. A premium trigger I’d never gotten to try until now, I’d heard military types praise the Geissele trigger even on rifles used in the rigors of battle. The supplied trigger was firm and had a sharp reset. It was clean, grit-free and allows for precision. My Timney trigger pull gauge showed an average trigger pull of just over 5 pounds for 10 tries.

Viking Tactics also designed the Low Profile Sling Mount (LPSM) that comes with the VTAC II. As the name implies, the LPSM hugs in close and prevents another snag point. It’s made for the Heavy Duty Quick Detach (HQD) swivel. The HQD snaps in, and the mount limits its rotation. The LPSM attaches to the Mil-Std-1913 rail.

Since Kyle Lamb markets a sling, it is a natural item to supply with his branded rifle. The sling is the padded two-point tactical sling, made for carry comfort and quick adjustment. The VTAC light mount is also provided, as well as a 30-round PMAG magazine. The light mount has an insert for lights the size of the SureFire Outdoorsman. For larger lights like the G2, you’ll have to remove the insert to install the light. 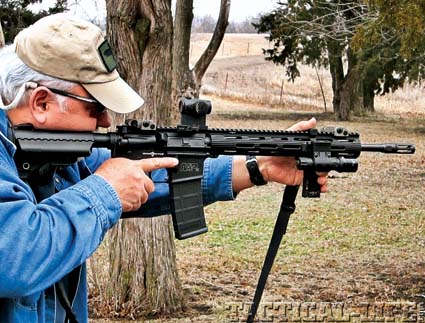 While the rifle would likely be used with a non-magnifying optic and back-up iron sights for patrol use, any real accuracy test requires a magnifying optic. The scope installed for precision was still something I use for wilder pursuits: the Trijicon TR24R AccuPoint 1-4X scope mounted with GG&G FLT Accu-Cam rings integral to the quick-detach mount. I shot from a seated bench using Shooters Ridge Gorilla bags for stability. After using a few rounds to zero the optic and treat the bore, I was ready to staple up 100-yard targets.

Aside from gusty breezes, there weren’t any other climate issues to create troubles. I used a Shooting Chrony Beta to clock ammo speeds. The Trijicon AccuPoint I have uses the illuminated triangle atop a bold post. It’s fine for precision work. Using the dual illumination of the Trijicon (tritium for dim-light conditions, fiber optic for daylight) gives plenty of visibility without futzing around with batteries.

The S&W M&P15 VTAC II was well mannered and comfortable to shoot. The operation was smooth, as I’d come to expect in mid-length carbines. The Vltor stock can be adjusted enough to keep me comfortable. The trigger, while firm, was comparatively light with a sharp reset point.

The VTAC II was more accurate than I expected. My guess is that we really have a 2- to 3-MOA carbine here, with me shooting it over a rest. It performed to 1 MOA in the best groups of a couple types of ammo. That exceeds my shooting ability, particularly with a carbine in this format. I’d be interested to see how that works over time with a variety of ammunition. The sample is fond of Black Hills 68-grain Match HP and ASYM Precision 75-grain OTM loads. 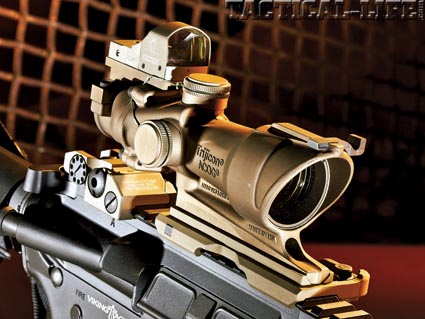 Just add a dual-purpose optic like this Trijicon 4X ACOG with Docter sight to the top rail and the VTAC II rifle is ready for patrol duty.

While the accuracy test is as sterile as I can get it here in the boondocks, the more practical exam comes with its use for intended purposes. I took the Trijicon AccuPoint off and added an Aimpoint Micro T-1. Troy Industries Battle Sights (front and rear) were supplied by Brownells. I installed the VTAC Light Mount and pushed the spacer out to give room for the SureFire G2 LED. This is a nice 80-lumen model; it gives good distance without overloading a white-walled room in conditions of darkness. You can have too much light—especially if you’ve been in the dark about an hour before hitting the on button!

To provide a handhold for the front of the gun that allows a “thumb-forward” grip while placing the hand close to activate the light, I contacted Viking Tactics and requested a quick-detach Ultralight Vertical Grip (UVG). This matches the setup Lamb uses on his videos. The VTAC UVG has just enough length without being too long. Fabricated of aluminum alloy, it’s light, thin, and it holds a pair of CR123 batteries by a cleverly (Please turn to page )
attached O-ring. There’s no cap to lose or crossthread when you’re in the heat of things. Push the O-ring out from under the battery and it comes free. This also prevents rattle. The UVG attaches with VTAC’s patented DLOC system and requires no tools for installation.

I’d also recently received some Lancer L5 Advanced Warfighter magazines in 20- and 30-round versions. I included them in the handling test, along with those from Brownells and Magpul. If I was attempting to make the VTAC II choke, it was to no avail. Mixing a box of various brands and weights of bullets and randomly loading magazines made for some interesting trigger time. The M&P15 VTAC II ran with routine regularity and the mid-length gas system seemed to smooth out differences in ammo.

Why spend more on someone else’s idea of the ideal “modern sporting rifle”—or more to the point—a “modern patrol rifle”? For one thing, SGM Lamb has been there and done it. He’s available to come around and train you and your department, too. If you want a preview, go to the VTAC website and get a DVD. See if his program fits you.

As to paying an upcharge, it’s not the Viking Tactics logo as much as it is the handguard, gas system, stock and the 1-in-8-inch rifling. I don’t know if you’ll be able to match the accuracy—which I’m still not able to get my head around—in your home build to what I got from the VTAC II. I doubt you can match the build for the asking price, either.

Along with the lower cost, you have fewer aftermarket accessories to buy. The Troy Industries Battle Sights are among the best options out there, and the Aimpoint Micro T-1 has been top of the mark since its introduction. Too pricey? Check out Aimpoint’s Patrol Ready Optic (PRO). The sights are really all you have to add. Other than that, the VTAC II is good to go.