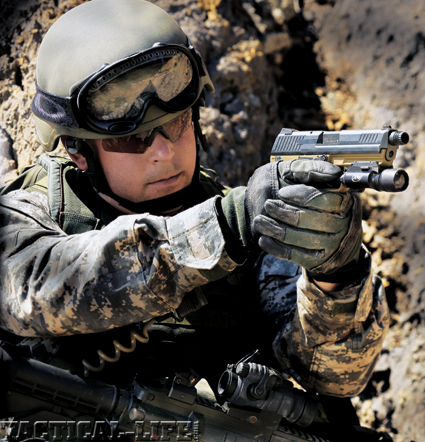 An Operator armed with an HK45, one of the frontrunners for adoption as the Joint Combat Pistol, takes aim with his SureFire weapons light equipped pistol. Though this HK45 has the threaded barrel, it does not have the higher sights designed to fire over the suppressor.

The Joint Combat Pistol Program began in 2005 as a merger of the Army Future Handgun and Special Operations Forces Combat Handgun programs. The program was designed to select a replacement for the Beretta M9 pistol. In March, 2006, the name of the program was changed to the Combat Pistol Program and instead of the original 645,000 pistols intended for purchase, the requirement was reduced to 50,000 pistols, primarily for special operations forces. Even the 50,000 pistols did not materialize, however, as the program was put on hold indefinitely in fall, 2006, though some funds were appropriated in 2007 to continue the Joint Pistol Study. As this is written, no contracts have been awarded for any of the JCP Trials pistols, and U.S. armed forces continue to purchase the Beretta M9, though many orders are now for the M9A1 with accessory rail.

The Joint Combat Pistol Program remains of interest, however, because it did generate some interesting pistol designs which have been made available to law enforcement and civilian shooters. To understand the pistols designed to meet JCP requirements, it is a good idea to look at the pistol’s bid specs.

What SOCOM Wanted
The four most basic requirements were: .45 AUTO chambering, M1913 “Picatinny” rail, day/night sights, and capability of accepting a suppressor. Among other required or desirable features were:

• Minimum magazine capacity of eight rounds with an additional magazine of no less than 10 rounds
• Durable and non-reflective surface finish—with an FDE (Flat Dark Earth) finish being deemed desirable
• External and internal finish highly resistant to corrosion and chemicals
• Controls allowing the pistol to be operated while wearing cold weather, chemical, scuba, or other specialized clothing
• Surfaces of the pistol finished to eliminate sharp edges
• Operator able to clear malfunctions without special tools
• Overall length not more than 9.65 inches with standard barrel and width not more than 1.53 inches
• Easy take down for maintenance and with captive takedown lever and/or pins. (JCP should also preclude improper reassembly after take down)
• Ability to function in Double Action/Single Action mode or Double Action Only mode (There was also a specification which called for the pistol to be reconfigured readily for DA only or DA/SA operation)
• Trigger pull of 8 to 10 pounds DA and 4 to 6 pounds SA; DAO (Double Action Only) pistols to have a trigger pull of 5 to 8 pounds
• Magazine which can drop free when empty at any angle between 0 and 45 degrees
• No magazine safety, allowing pistol to be fired without magazine
• Magazine release operable without shifting the firing grip
• Should be operable by troops of a wide variety of sizes; hence modular grip adjustment system should be incorporated
• Readily operable by right-or left-handed shooters (i.e. ambidextrous controls) 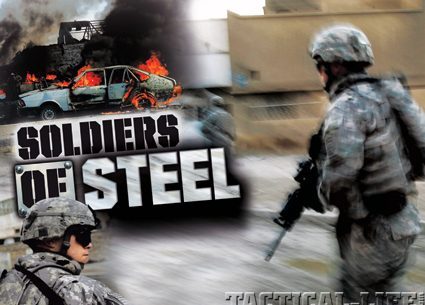 An Operator armed with an HK45, one of the frontrunners for adoption as the…