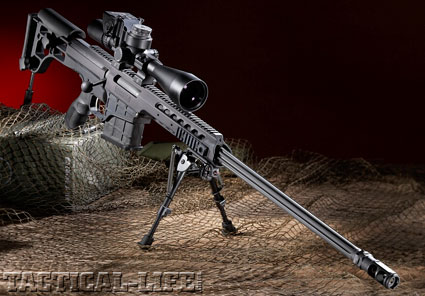 On January 15, ’09 SOCOM re­leased its requirements for a new PSR (Precision Sniper Rifle) for future fielding with our nation’s special operations forces. It seems that Uncle Sam has finally embraced the idea that the 7.62mm doesn’t have the legs for our current operational environment and at 27 pounds (unloaded) a .50 cal can only be carried so far so fast by one soldier. In an effort to reach out farther than a 7.62mm rifle allows while keeping the weight reasonable for one soldier to carry, SOCOM has introduced the PSR program.

The future PSR must have a stock that either collapses, folds or removes without tools. It must also have no component longer than 40 inches and weigh less than 18 pounds with a loaded five-round magazine. Mil Std 1913 rails are required and the barrel must be changeable by the operator within 20 minutes. There is no specified caliber.

PSR Solicitation For SOCOM
The accuracy requirements bear close scrutiny. All accuracy measurements will be taken at 1,500 meters. Yes, you read that right. In a stroke of genius, SOCOM will take all accuracy measurements at the range of operational employment of the PSR. Ten-round groups will be measured for vertical dispersion only, negating variable wind effects.

BARRETT 98B
Barrett is the reigning long-range .50-caliber king. Being already familiar with the military’s acquisition process and having a record of proven performance, anything from Barrett should be considered a strong contender. Barrett could submit their 98B in .338 Lapua Magnum for the PSR solicitation.

The 98B has several design features that are uniquely Barrett. When shouldered, the 98B places the shooter’s shoulder in alignment with the centerline axis of the bore. This and its muzzle brake make for superior recoil management and comparatively mild felt recoil.

Another feature that only Barrett offers are polymer bolt guides that the bolt rides on throughout its cycle. These polymer bolt guides allow for smooth bolt operation even in the absence of lubricant. Servicemen overseas are all too familiar with the problematic affinity that any lubricant has for dust and dirt.

The Barrett 98B would also be one of the lightest rifles participating in the program. It tips the scales at a svelte 13.5 pounds (empty), which means that even with a loaded five-round mag, it will be well under the 18-pound threshold stipulated by SOCOM. It is also important to note that while SOCOM has set 18 pounds has their acceptable weight limit, their objective is a rifle that weighs only 15 pounds.

SAKO TRG-42
I first fired a prototype PSR version of the TRG-42 a couple of years ago while still assigned as a sniper team leader with 3rd Special Forces Group. We had the team out in Texas for three weeks of training. Our instructor was doing the R&D on the TRG-42 and let some of us take a turn as time allowed.

I was immediately impressed with the ergonomics of the stock and the portability of the system. With a 20-inch barrel and side-folding stock, it’s a compact little package that’s a joy to transport. The SureFire muzzle brake did an exceptional job of dampening the recoil to the point that our instructor mentioned that he’d let his 12-year-old son shoot it with no worries.

The most notable change to the present day TRG-42 vying for the PSR contract is the addition of a quad rail to the fore end of the stock. While superfluous to the shooting majority, the quad rail is an essential addition for weapons employed in a military sniping or special-operation role. It allows the addition of infrared sighting devices and illuminators.

SIG SAUER TACTICAL 2
The next unique contender could be Sig Sauer’s Tactical 2 bolt-action rifle that doesn’t require rotation to unlock the bolt. Instead, the bolt is pulled straight to the rear to cycle the action and locks firmly in place with a 360-degree radial collet when pushed forward into battery.

The rifle is easily converted between either right or left-hand shooters thanks to the straight-pull bolt and symmetrical cheek piece. Another unique feature of the rifle is the ability to rapidly switch from one caliber to another. By simply replacing the bolt’s head and barrel, the operator can choose between .223 Remington, .308 Win, .300 Win Mag and .338 Lapua Mag.

The feature of the rifle that makes it a strong contender is the ability to rapidly change barrels. This is a tremendous asset for any rifle shooting the .338 Lapua Mag, because .338 cartridges eat barrel throats much more rapidly than .308s. Rifles that will see high round-counts (like a military sniper rifle during times of war) need to be re-barreled frequently. While having the ability to change from one caliber to another is nice, the ability for the operator to easily re-barrel his own weapon is an advantage. 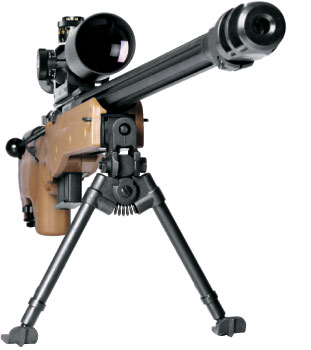 Accuracy International’s (AI) AW338 is, perhaps, the rifle that introduced the militaries of the world to the wonders of the .338 Lapua Magnum. Accuracy International supplied the L115A3 to the UK MoD for all three services and the weapon system has been in Afghanistan for nearly a year. The L115A3 replaced the L96, which was a 7.62x51mm sniper rifle in service for the past 20 years and also supplied by AI. Needless to say, the AW338 is already well known to the world’s sniping community.

The AI rifle has a three-lug bolt that means the bolt only needs to be turned 60 degrees before it unlocks for cycling. The shorter bolt throw requires less movement from the shooter to cycle the action; which makes it easier to stay consistent from shot to shot and decreases times between follow up shots when engaging multiple targets.

The chassis of this rifle is also extremely popular in the United States for custom gun builds on either the Surgeon or Remington 700 action. The ergonomics, light weight and ability to fold the stock are all key factors. 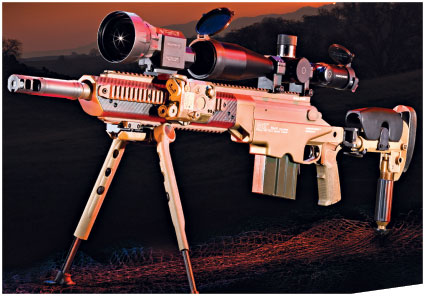 ASHBURY ASW338
Ashbury International Group specializes in assembling commercial off-the-shelf systems for fielding and integration into military service. Ashbury’s PSR candidate, like many of their products, is a collection of specialty parts from the commercial sector. The exception to Ashbury’s M.O. for the PSR is the proprietary chassis system on their ASW338. The SABER-FORSST chassis is made for Ashbury from aluminum and composite materials. The side-folding chassis has multiple Picatinny rails that allow the operator to use up to a 60 MOA bias with installed optics. Alas, Ashbury International doesn’t sell their chassis system to civilians. It’s for military and law enforcement only.

Thankfully the heart and soul of the ASW338 is the standard Surgeon XL action. Surgeon mates both 20” and 27” Rock Creek barrels to their XL action for different models of the ASW338. Barrels are capped with either AAC, Ops Inc or SureFire suppressors.

Inside sources confirm that the chassis alone has an MSRP of $5,000 as quoted to SOCOM. At this time, there is no final price for the complete sniper weapon.

ARMALITE AR30
While ArmaLite is mostly known for producing high quality ARs, they also offer a family of bolt-action rifles. ArmaLite could choose its AR30 (available in either .308, .300 Win Mag or .338 Lapua Mag) to participate in the PSR solicitation. The MSRP of $1,882 makes the AR30 the most accessible entrant in the solicitation.

The AR30’s beefy dual-lug bolt action rests in a v-shaped bedding block in the aluminum chassis. The stock is fabricated from three pieces: the fore end, grip frame and removable buttstock. A 15-MOA-bias Picatinny rail runs along the action’s top.

We expect the AR30 to exhibit exceptional accuracy thanks to the Lothar Walther chrome-moly barrel. The 1:10 twist that comes with the .338 Lapua Mag offering promises to deliver optimum stability and accuracy with either the 250-grain or 300-grain bullets it’ll be firing. With the removable buttstock and lightweight aluminum chassis, the AR30 won’t have any problems with the weight or length requirements set forth in the solicitation. However, we do expect to see some type of quad rail developed. Part of the GO/NO-GO criteria require the ability to mount accessories at the 3, 6, 9 and 12 o’clock positions on the fore end of the stock.

DRAKE INDUSTRIES PGM
A new rifle, and possible PSR contender, imported by Drake Industries is the bolt action PGM chambered in .338 Lapua Magnum. Upon inspection, the most notable feature of this new Swiss-designed, French-built, Belgian-distributed rifle is the super-beefy bolt action. It’s so big that it makes the Surgeon XL action look petite. Snipers like big beefy actions because their rigidity makes an excellent foundation for a sniper rifle. However, it’s important to remember the old soldier’s axiom, “Ounces equal pounds and pounds equal pain!”

The PGM meets the initial PSR criteria mandating a folding or removable stock and a quad rail system. The stock is a combination of both polymer and aluminum and appears to be plenty robust for field use. The quad rail attached to the fore end enables the barrel to free float while still providing mounting options for other mission-essential equipment.

Other key features include an AR-style pistol grip, a monolithic rail atop the action and a detachable box magazine. The PGM is also set up for use with the Versapod should the operator be so inclined. While the PGM might not have the brand recognition that other PSR candidates enjoy, it is a newcomer to be taken seriously.

Perhaps the most anticipated of all the PSR candidates is Remington’s new MSR (Modular Sniper Rifle). The MSR represents an entirely new action and chassis from this American icon. For decades the Remington 700—especially the action—has dominated the sniper landscape. Could the MSR represent the dawning of a new era for snipers everywhere? We’ll have to wait and see. In the meantime, here’s the skinny on this bolt-action, side-folding powerhouse.

Remington’s new MSR is so new and so unique that the entire rifle is patent pending. Everything from the triangular-shaped three-lug titanium action with a 60-degree bolt throw to the side folding modular stock was developed specifically for this solicitation. Perhaps most unique to this rifle will be the operator’s ability to easily change both barrel and caliber. One rifle will be able to shoot .308, .300 Win Mag and .338 Lapua Mag from barrels ranging from 20 inches to 27 inches.

Other significant features include a modular forend that lets the shooter choose its length, a rail system that allows innumerable mounting options for any number of shooting accessories, an adjustable trigger and an AR-style pistol grip. The rifle’s incredible durability and Remington’s reputation for quality make this contender supremely difficult to defeat. While not immediately ready for civilian purchase, Remington may make it available in the future. 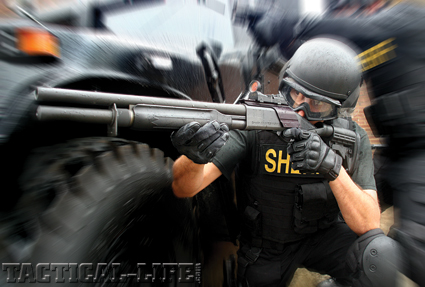 On January 15, ’09 SOCOM re­leased its requirements for a new PSR (Precision Sniper…