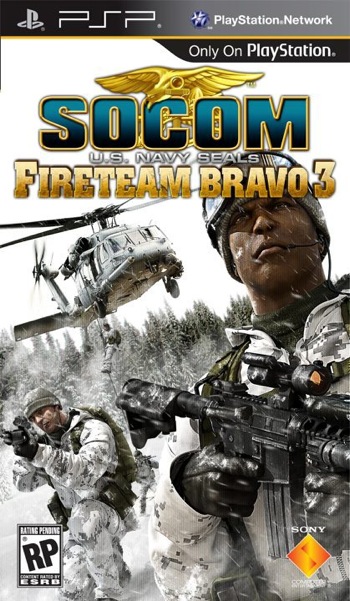 Created with the technical support of the U.S. Naval Special Warfare Command, the SOCOM series is renowned for its real-world scenarios and attention to detail. The fireteam takes a leading role in SOCOM: U.S. Navy SEALs Fireteam Bravo 3 as the SEALs embark on a mission to track down and interrogate Alexander Gozorov, a former KGB operative who is believed to be withholding information about a major WMD attack against Western interests. A heightened emphasis is placed on the storyline and character development of the SEALs. For the first time in the series, SOCOM: U.S. Navy SEALs Fireteam Bravo 3 leverages the relationship between the squadmates to help progress the story forward. The story unfolds throughout the campaign as the SEALs discover the truth behind Gozorov and is supported by over thirty minutes of game driven cinematics utilizing the 3rd generation PSP visual engine.

SOCOM: U.S. Navy SEALs Fireteam Bravo 3 features a robust single-player campaign with nine customizable campaign missions and a number of new gameplay features including a free-look camera mode, regenerating health and intelligent cover systems. The intuitive new cover system allows members of the fireteam to crouch behind environmental objects and intelligently adjust to the environment to peek over objects and lock on to enemies without being exposed. A full command system is also in place. As SEAL Commander, players have the option to direct their squad members to perform different actions in battle or set up coordinated attacks. Players will unlock gear and weapons as well as earn medals as they complete objectives throughout the campaign. The medals earned during the campaign missions can then be integrated to players’ Facebook accounts. Once the campaign missions are completed, players will have the option to go back and replay the campaign missions with new customizable objectives and parameters such as enemy placement, number of squad members or enhanced difficulty modes.

While the SOCOM name has long been synonymous with multiplayer tactical gaming, SOCOM: U.S. Navy SEALs Fireteam Bravo 3 takes it a step further with the introduction of cooperative play. Available in both Ad-Hoc and Infrastructure, cooperative play allows 2-4 players to team up throughout the single-player campaign including co-op orders and quick join. The quick join feature lets players join late or drop out of the match at any time. Co-op orders enable players to give quick commands to their fireteam. Players can hold the circle button to navigate the on-screen menu and command their team to move to certain points on the map, fire at will or use stealth. Eight single-player campaign missions are accessible in cooperative play with the option to replay the missions with new, customizable objectives.

SOCOM: U.S. Navy SEALs Fireteam Bravo 3 continues the franchise’s tradition of unparalleled multiplayer gaming with 16-player competitive multiplayer. Players will be immersed in 5 classic and objective based game modes across 8 diverse custom maps based on the single-player campaign. Up to 16 players can connect via Ad-hoc and Infrastructure to compete in any of the three classic SOCOM game modes or engage in two new modes, ‘Leader Mode’ and ‘Tug-of-War’. New to the series, ‘Leader Mode’ lets players designate a squad leader and spawn beside them to help progress to the objective points. Additionally, a new ‘Tug-of-War’ mode allows teams to capture control points to help dominate the enemy. Players will have the option to customize their characters and loadouts with gear earned in the story mode, which includes more than 70 weapons and attachments. All weapons come with a varying degree of difficulty, each of which can be customized with different accessories. Players can adjust the scopes, add silencers or mount under or over the barrel attachments to provide extra flexibility in battle. When played in infrastructure mode, competitive multiplayer supports a number of expanded online community features including clan challenges and ladders, voice chat, Twitter stats and character customization.

Aging U.S. Army helicopter aviation confronts the challenges of 2010 and beyond.