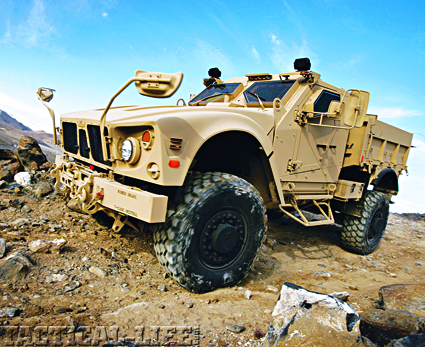 During the past couple of years, this world-class designer and manufacturer in east-central Wisconsin swiftly expanded its lines of conventional and hybrid tactical trucks and armored wheeled vehicles, allowing U.S. warfighters to travel more safely and rapidly on-road and off-road in the harsh, often IED-infested terrain of Iraq and Afghanistan.

Leading the way is Oshkosh Defense’s MRAP (Mine Resistant Ambush Protected) All-Terrain Vehicle (M-ATV), which was developed specifically for Afghanistan. This nearly 25,000-pound vehicle with its V-shaped hull delivers MRAP-level protection against bullets and roadside bombs, but with the mobility to carry out missions on rugged, mountainous and roadless terrain. As of June 2010, the Department of Defense had ordered nearly 8,100 M-ATVs from Oshkosh Defense, with contract awards valued at more than $5 billion. These orders include spare-parts kits, upgrade kits and aftermarket support.

The M-ATV can carry four passengers and one gunner in a protective capsule for greater survivability of roadside bomb attacks. This well-balanced machine is built around a proven chassis from Oshkosh Defense’s MTVR (Medium Tactical Vehicle Replacement), and features battle-tested armor from Plasan North America. Plasan also developed the armor system used on more than 5,000 legacy MRAPs and thousands of Oshkosh Armored Cab MTVRs already in-theater.