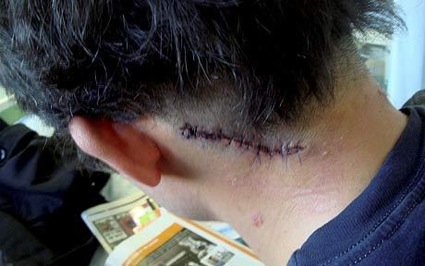 Lance Corporal Andrew Ferguson, 31, has been dubbed the ”miracle of Helmand” after the lethal round missed his spine and major arteries by a tenth of an inch.

It struck him just below his left ear, ripping a two inch hole before passing seven inches diagonally through his neck and out the other side, where it left a gaping four inch exit wound.

Despite the injury, he continued to give orders to his men during the heavy firefight before being rushed for emergency surgery.

And yesterday, just weeks after he was shot, he is already back at work and looking forward to returning to the front line.

L/Cpl Ferguson, from Stevenage, Hertfordshire, said: ”For about half a second I wasn’t aware of what had happened but it quickly became apparent that I had been shot.

”It was like someone smashing a block of wood on the back of my neck then a burning sensation which quickly turned into a dull ache.

”My first thought was that with the amount of blood coming out I’d had it – I thought I was going to die. There was blood all over the rest of the men. After a couple of seconds I knew I was still breathing and I thought I must be paralysed.

”I remember being quite shocked that I could still wiggle my toes.”

L/Cpl Ferguson was taken to a hospital at Camp Bastion by an American helicopter then flown back to the UK where he underwent surgery at Selby Oak Hospital in Birmingham.

He was released just five days later and took just two weeks of sick leave before returning to his duties.

Despite the huge risks of paralysis, he is now expected to make a full recovery.

He said: ”It was amazing how quickly the whole thing went from actually being hit to being back in my hospital bed in England.

Read the rest of the article at the Telegraph U.K. Via Warrior Times.

Lance Corporal Andrew Ferguson, 31, has been dubbed the ''miracle of Helmand'' after the…