Soldiers from the U.S. Army Marksmanship Unit completed one of the unit’s most successful runs in recent years at the 2010 National Rifle and Pistol Championship, winning multiple individual and team championships, setting national records, and upholding the unit’s reputation as the “Home of Champions.”

Accomplishing the unit’s mission to enhance the Army’s recruiting effort and raise the Army’s combat readiness takes up a lot of the Soldiers time, so the USAMU Soldiers’ intense desire to train to win enabled them to prevail at Camp Perry. 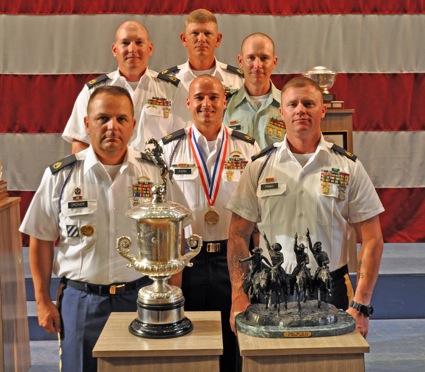 “Our expansive mission of supporting the war-fighter limits the amount of time available to prepare for the National Championship,” said Sgt. 1st Class Kyle Ward, noncommissioned officer-in-charge of the service rifle team “When the team is able to come together and train, everyone is extremely focused on the task at hand.”

The crowning achievement for the unit was finishing first in all of the major team competitions at the championships. The USAMU Service Pistol’s Blue team started things off by winning the “Coming Through the Rye” trophy as the top four-man pistol team, winning the title for the second time in the unit’s history.

Much of the team’s success is credited to teamwork, Ward said. Soldiers helped each other out during training sessions, communicated well during the matches, and, as is always the case at the USAMU, the Custom Firearms Shop provided the direct support that enables the USAMU to stand tall above the rest. 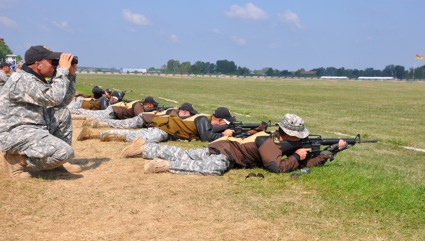 “I attribute much of our success to the professionals in the Custom Firearms Shop and loading facility who went the extra mile in ensuring that we had the best equipment possible,” said Ward.

Individually, USAMU Soldiers stood out amongst the huge field of more than 6,000 competitors throughout the six-week period in July and August.

Sgt. Sherri Jo Gallagher persevered against one of the toughest field of competitors in the history of rifle competitions to win the national high-powered rifle championship. Gallagher set a new national record in the process with a score of 2396-161x, beating out a ten-time champion, a four-time champion, and the defending champion.

She is the first service member to win the championship since 1987 and only the second woman ever to do so—her mother was the first. Gallagher won eight individual matches, seven aggregate championships and set four other national records over the course of the week. 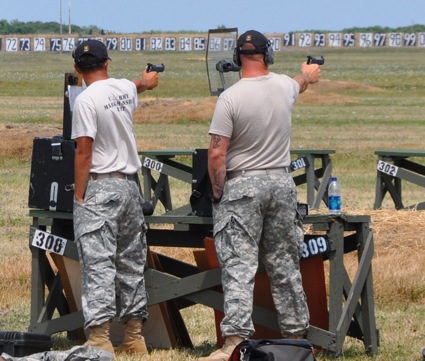 CAMP PERRY, Ohio – Sgt. Lawrence Cleveland (left) and Staff Sgt. Patrick Franks (right) compete during the National Trophy Team Pistol match July 18 at Camp Perry. It was the first national championships as members of the USAMU for both Soldiers they fared exceptionally well. Cleveland won the Excellence-in-Competition match and Franks was a member of the first place team at the nationals. (Photo by Michael Molinaro, USAMU PAO)

Staff Sgt. Shane Barnhart swept the field during the smallbore matches, winning both the national three-position and prone championships, the second consecutive year a USAMU Soldier has accomplished the incredible feat and only the third shooter ever in the history of the matches. It was the fourth time he won the three-position championship.

“I have been close to winning the prone before, but this year I was hungry for it,” Barnhart said. “I worked my butt off during the entire nationals. I never let up.”

“Being only the third person in history to double up on the championships feels amazing. This motivates me to really train hard to make the Olympic team and World Cups.”

Staff Sgt. Robert Park led the way for the Service Pistol team. Park won the prestigious President’s Pistol Trophy for the second time and finished in third place overall at the National Pistol Championship, his first time making the podium. He was a member of three team championships and won three other individual titles, including the overall service pistol champion during the Civilian Marksmanship Program’s National Trophy Pistol matches.

Soldiers are primed for a busy fall season conducting marksmanship training for Soldiers preparing to deploy. Combining the unit’s performance at the nationals with their sheer dominance in the Interservice competitions, the training those deploying Soldiers will receive will undoubtedly come from the best.