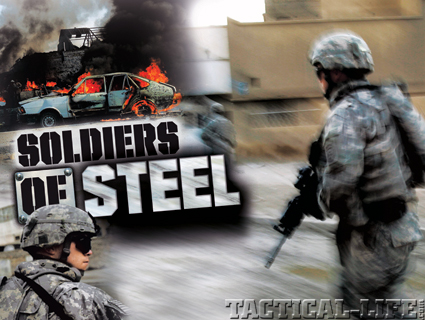 One of Aaron Fouraker’s buddies captures him (in the foreground) and a couple more of his brothers in arms as they begin a night patrol in the Saddar City suburb of Al Fadhal in 2007.

“Retirement” conjures a vision of old folks relaxing, soaking up the sun and spending their children’s inheritance in fun-filled destinations. “Medical retirement” has a darker meaning, especially when it refers to a GI still in his 20’s. Aaron Fouraker and Andrew Brady both learned the hard way why medical retirement isn’t a popular career path. Both soldiers received purple hearts battling al-Qaida and Iraqi insurgents. On homecoming, both turned their boyhood love of firearms into gunsmithing businesses, while they continue to heal. 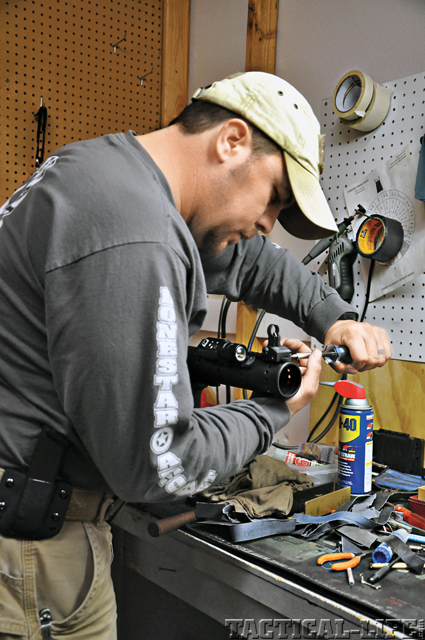 Formerly a 3-gun match shooter, Brady hopes the nerve damage heals in his shooting hand allowing him to compete again.

Delta Company Arms
Aaron Fouraker is just 24 years old, a self-described shooting enthusiast from Russelville, AR fascinated with firearms and shooting at an early age. Some college under his belt, Fouraker joined the Army.

“I joined the Army May 2005,” Fouraker said, “and left for basic training at Ft. Benning at the Infantry school in December. Then I went to Airborne School for three weeks. When I came home on leave, I got married, assigned to Ft. Bragg and the 82nd Airborne Division in June 2006.” When he got to Bragg, Fouraker was assigned to Delta Company 1/504, which is the inspiration for his business name.