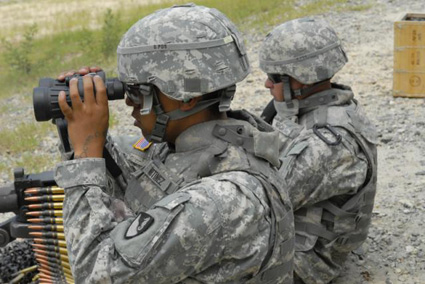 FORT BENNING, Ga. — More than a dozen Soldiers from Fort Benning test-fired an enhanced .50-caliber machine gun that allows troops to rapidly change the barrel without having to check or reset headspace and timing, officials said.

The Maneuver Battle Lab conducted its experiment on the M-2 E2 weapon at Coolidge Range from July 8-15.

Rusty Schulten, test director and project officer for the Maneuver Battle Lab’s Soldier team, said the Army identified the need for a revision to the M-2 HB, the .50-caliber machine gun now in use. The upgraded version increases safety and improves survivability, he said.

“The M-2 HB requires headspace and timing to be set, which exposes Soldiers to enemy fire for extended periods of time while performing barrel-changing procedures,” Schulten said. “The M-2 E2 implements a fixed headspace and timing operating system. These modifications are intended to make the .50-caliber machine gun easier and safer to employ.”

“Our only objective is to provide an unbiased evaluation of the operational effectiveness of the M-2 E2 in order to inform future acquisition decisions,” Schulten said.

Experiment officials said no decision has been made on how soon the M-2 E2 could be ready for the battlefield.

Operational testing in hot and cold environments is under way at Aberdeen Proving Ground in Maryland, said Matt Pintsch, an engineer from Picatinny Arsenal, N.J., who was here as an observer.

“They have the final say on safety issues,” he said. “You have to get their approval before moving on with the program.”

If effective and fielded to the Army, the M-2 E2 would ease training requirements and decrease the chance for weapon malfunctions, Schulten said.

Sixteen Soldiers – 11 from the 11th Engineer Battalion and five with the 209th Military Police Detachment – took part in the testing at Coolidge Range. They fired the old and new .50-caliber machine guns at known distances and were timed on barrel changes from the tripod and vehicle mounts.

“It’s pretty hot,” said Staff Sgt. Mark Hooks of the 209th MP Detachment, referring to the upgraded weapon. “The components are a lot better. Everything is going to go so much faster because you don’t have to do headspace and timing adjustments. You’re alleviating a whole lot. We went from 10 minutes to 10 seconds.”

The M-2 E2 would significantly cut down on prep and readiness time in a combat zone, he said.

“People will be ready to go twice as fast,” Hooks said. “If I got a squad out there getting fired at, I’ve got to go out and help them right away … This is probably one of the best things I’ve seen the military do weapons-wise.”

“It makes the barrel change a lot more efficient and doesn’t take as much time,” said Sgt. Fred Roberts, also from the 209th MP Detachment. “But the main operation of the weapon is exactly the same.”

Spc. Arthur Coleman of the 11th Engineer Battalion said the fixed gauges on the M-2 E2 are a major difference over the M-2s HB.

“I love it,” he said of the quick-change barrel. “It fires just like the old weapon. But on the old weapon, you had to check the headspace and timing every time. If you’re in a firefight, this will make it a whole lot easier to change the barrel out.” 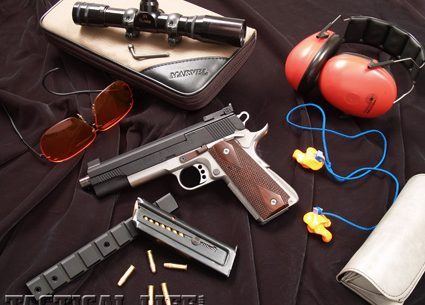 With the Marvel Precision .22 handgun, shoot rimfire ammo from your 1911— save money,...