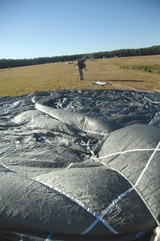 Forty or so rigger students and cadre were gathered on the tarmac – some fully geared up and ready to board the aircraft – others undergoing inspections before being cleared to jump.

But this operation was different in that several of the participants were equipped with the Army’s newest parachute.

The Advanced Tactical Parachute System T-11 made its debut at Fort Lee as six cadre members of the Quartermaster School’s Aerial Delivery and Field Services Department logged a successful jump from a UH-60 Black Hawk Helicopter.

Maj. Samuel Burns, ADFSD deputy director, said his department is participating in the T-11 operational testing and fielding phase which aims to work out any kinks in the system.

“The fielding is ongoing,” he said, noting many operational units are already equipped with the new parachute. “We have them here because the T-11 will become part of the parachute rigger AIT program of instruction.”

In fact, the T-11 will be phased in over the next three years and become the Army’s main parachute system, replacing the T-10, which has been in service more than 50 years. ADFSD has already received roughly 250 T-11s and will begin teaching the new parachute system to students within “the next 60 days,” said Burns.

Additionally, ADFSD rigger instructors and staff will play a critical role in the Army-wide phase-in period, traveling to units worldwide to provide instruction and guidance on the use of the system.

“We’ll send the first teams out in November,” said Burns.

Judging from the sentiment from these jumpers, the T-11 will likely be warmly received.

“I think they’ll be happy to get one,” said Sgt. 1st Class Timothy Vogt, one of the six Soldiers who logged a jump in the new parachute.

The T-11 differs from its predecessor in that the canopy deployment is smoother, oscillation is minimized and it is designed to carry a heavier load, about 100 pounds more and closer to current load requirements. Additionally, it has a canopy that is larger and square-shaped, contributing to a slower descent rate.

“Comparing the rate of descent to other parachutes that I jumped, it’s relatively slower,” said Master Sgt. Tonika Scott-Morris, the ADFSD sergeant major who has had more than a 100 jumps using a variety of parachutes. “If the descent is slower the landing is softer.”

A softer landing is critical to preventing injuries, said Scott-Morris. The T-11’s rate of descent is roughly four seconds slower than the T-10.

Scott-Morris said that although the test went well and most of the jumpers were impressed with the new equipment, the results are not conclusive.

“With any new piece of equipment, you will have deficiencies that are not discovered until actual (large-scale) operation of (that equipment),” she said.

Scott-Morris said there were reports of deficiencies with the T-11, but they have been addressed. She said her cadre will perform more jumps to further validate the modifications.

“We’ll do five to 10 more jumps just to get good concurrent data,” she said some of those tests will include jumps from high-performance aircraft such as the Air Force C-130.

The 75th Ranger Regiment and the U.S. Army Airborne School have also received the new T-11. Fort Bragg’s 82nd Airborne Division is still in the fielding process, and the rest of the Army will field the T-11 by 2014.