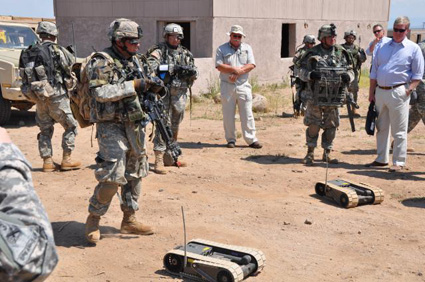 WASHINGTON– Soldiers with the Army Evaluation Task Force at Fort Bliss, Texas, are now in the midst of a “limited user test” that will move equipment that’s part of the Early Infantry Brigade Capability Package one step closer to being in the hands of Soldiers.

This LUT is reviewing the maturity, readiness and functionality of equipment like the Small Unmanned Ground Vehicle, the Class I Unmanned Aerial System, both the tactical and urban unattended ground sensors, and the Non Line of Sight-Launch System, as well as an early network integration kit.

As part of the three-week LUT, which ends Sept. 16, Soldiers put equipment through the full spectrum of military operations, including defense, offense and stability operations. Included in the test were such things as cordon and search missions, urban operations and operations among civilian populations.

Following the LUT, the Army’s Test and Evaluation Command will use data gathered to assess the equipment’s maturity, readiness and functionality. The reports will feed into milestone decisions for the equipment’s production and fielding, officials said. They added that follow-on tests will prove final maturity of some systems.

Results of the current LUT could bring equipment in the capability package to a milestone decision later this year — which is a decision to enter into production, said Paul Mehney, a spokesperson for the Army’s BCT Modernization Program. He said Soldiers in some of the 73 Army brigade combat teams should start to see the technology around 2011.

“This is the very early stages of LUT,” Mehney said. “This LUT is not the final end to testing and evaluation of this capability package. This LUT will validate interoperability and lead to follow-on testing for full operational performance.”

After cancellation of the Future Combat Systems program earlier this year, the Army continued its focus on modernization of the force through the Army Brigade Combat Team Modernization program. The program includes much of the equipment that was already part of FCS, such as aerial vehicles and unmanned ground vehicles. The BCTM program also includes ground sensors, the NLOS-LS, a continued focus on the network and a replacement ground vehicle, called the Ground Combat Vehicle.

Soldiers in the AETF have been to theater and bring with them to the testing environment knowledge of what is needed there, officials said, and how the equipment they have been asked to test will be received by Soldiers in combat.