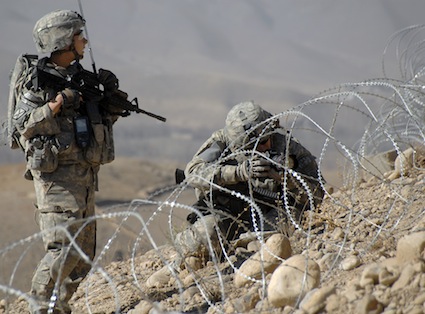 Secretary of the Army John McHugh signed a directive instituting a nine-month “boots on the ground” policy for deployed Soldiers, providing more “dwell” time at home for Soldiers and families.

“Implementation of this change is based on the projected demand for Army forces, and remains contingent on global security conditions and combatant commanders’ requirements,” said Lt. Col. Peggy Kageleiry, an Army spokesperson.

Corps units and above, and individual augmentee deployments will remain at 12-month deployments.

The goal for the corps units is to eventually get to nine-month deployments.

Most augmentees — those with particular skills or those in low density skill sets and grades — will remain on 12-month deployments.

This change in policy, to be fully implemented by April 1, will affect Soldiers in all named operations, including Operation Enduring Freedom in Afghanistan, Operation Noble Guardian in Kosovo, and Multi-National Forces Sinai in Egypt.