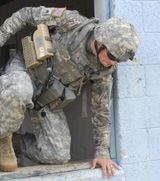 FORT BENNING, Ga. — The Army is looking at ways to keep Soldiers cooler in the desert and reduce the number of heat-related illnesses within the ranks.

As part of the effort, Fort Benning’s Maneuver Battle Lab collected feedback from 18 Soldiers this week during an experiment on micro-climate cooling options for individual troops. The evaluation, which began Monday and was scheduled to end Thursday, took place at the McKenna Urban Operations Complex.

Both operate on standard military batteries and generate 120 watts of cooling, said Walter Teal, a chemical engineer from the Natick Soldier Research, Development and Engineering Center in Massachusetts. The two systems weigh about four pounds each.

“We’ve been working on cooling options for the dismounted Soldier, something smaller and lighter weight,” Teal said. “These are not necessarily going to make you feel comfortable. You’re still going to be hot and sweaty. But it’s enough cooling in most situations to prevent you from becoming a heat casualty.”

He said the Army documents 1,500 to 2,000 cases of heat-related incidents each year.

In 2005, there were 1,467 Soldiers treated for heat exhaustion, 258 cases of heat stroke and six deaths caused by heat exposure, Teal said, citing data from the Army Office of the Surgeon General.

“That’s just the medical cases,” he said. “It doesn’t count every time a Soldier had to take a break in the shade and rehydrate. We suspect there are a lot more heat incidents that interfere with the operations tempo, and we think the numbers will go way down if they have some cooling options.”

Soldiers can mount the two cooling systems to any MOLLE (Modular Lightweight Load-carrying Equipment) area on their body armor or rucksack, as the straps are weaved through the webbing. Engineers also put tubing on Army combat shirts.

Teal said the systems chill water and pump it through the tubing on the shirts.

The Soldiers in the evaluation are assigned to A Company, 1st Battalion, 29th Infantry Regiment – the Maneuver Battle Lab’s experimentation force. They completed about two hours of physical activity each day.

“We’re assessing their mobility in that environment and durability of the systems,” Dupont said. “The courses stress every fighting position a Soldier would have to take.”

He said the Army has worked to develop the technology for about seven years and it’s gone through several reiterations to make the systems lighter and quieter with a longer battery life.

“The tubing is a little bulky and it’s a little unreliable,” said Spc. Isaiah Ramirez. “Half the Soldiers said they were having issues with the equipment.”

Spc. John Twist said individual cooling systems would help troops in Iraq and Afghanistan if the kinks can be worked out.

“It’s a great idea if they can make it more lightweight and you can count on it to work,” he said.

Teal said engineers would use the experiment to resolve mounting issues with gear and make voltage adjustments.

“Did the system snag on anything? Are Soldiers able to do normal activities without getting hung up on anything? Is the cooling you get worth the added weight you have to carry? That’s what we’re looking to see,” Teal said.

“This will give us guidance to make system improvements and eliminate those hazards.” 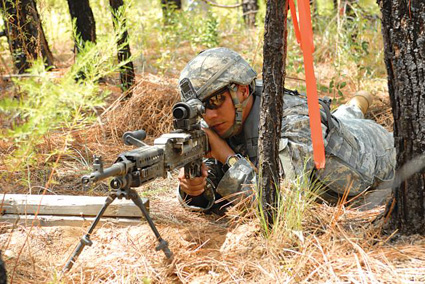 FORT BENNING, Ga. -- The Army is looking at ways to keep Soldiers cooler…