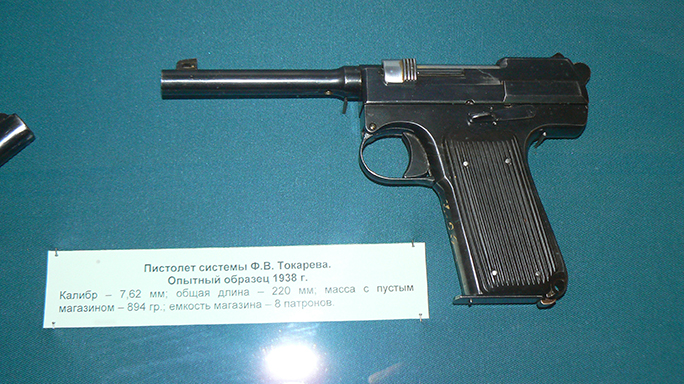 1 of 11
Soviet R&D: The Many Experimental Weapons of the USSR
This 1938 Fedorov prototype fired 7.62x25mm ammo and had a tank-friendly barrel. 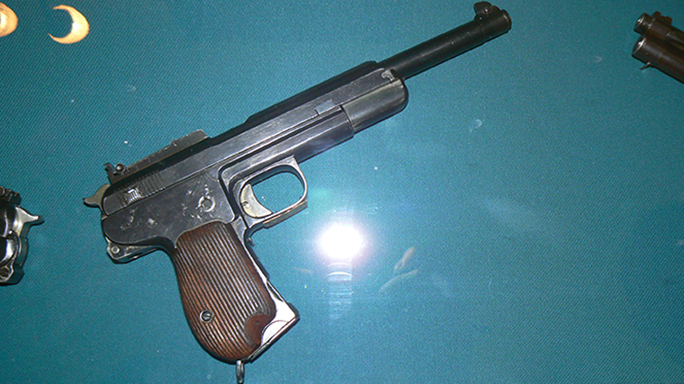 2 of 11
Soviet R&D: The Many Experimental Weapons of the USSR
Created by Fedor Tokarev, this 7.63x25mm prototype held 22 rounds. 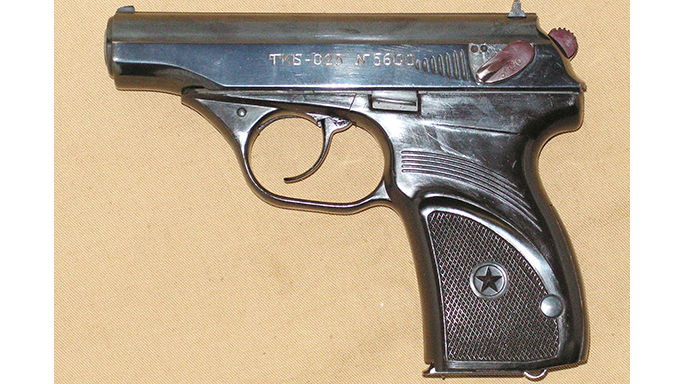 3 of 11
Soviet R&D: The Many Experimental Weapons of the USSR
The TKB-025 was a derivative of Makarov PM, but featured a much lighter polymer frame. 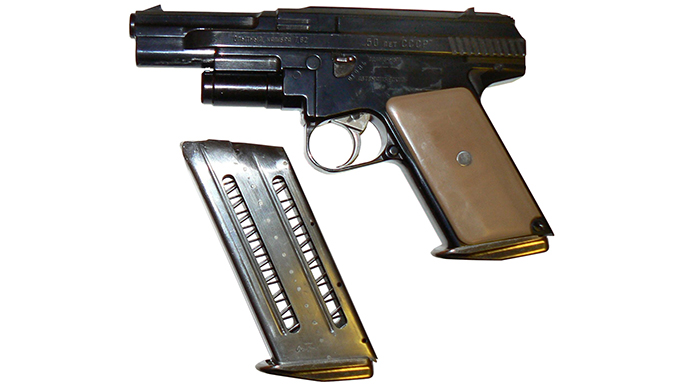 4 of 11
Soviet R&D: The Many Experimental Weapons of the USSR
Gerasimenko VAG-73 pistols used 48-round magazines. 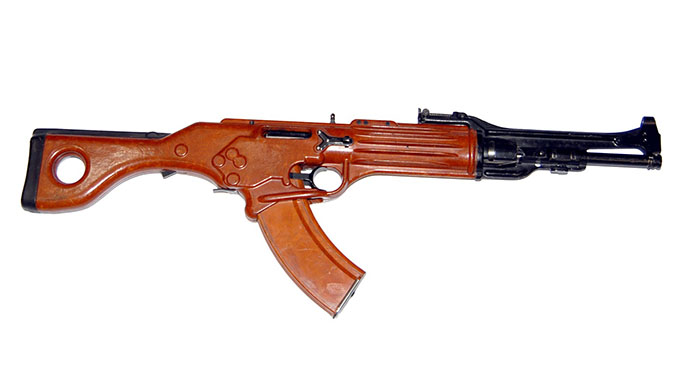 5 of 11
Soviet R&D: The Many Experimental Weapons of the USSR
This advanced Korobov rifle from 1964 featured an all-plastic housing that concealed its steel receiver. 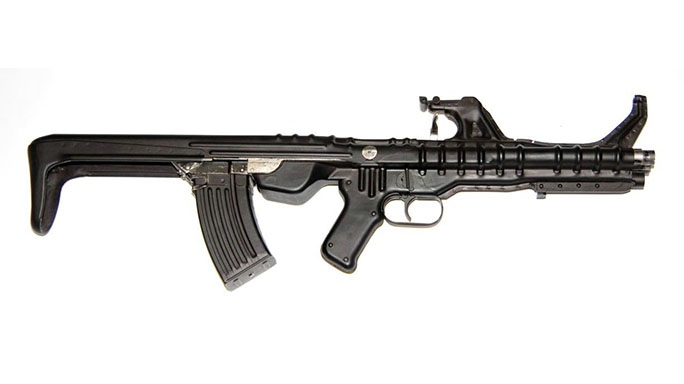 6 of 11
Soviet R&D: The Many Experimental Weapons of the USSR
The 7.62x39mm Korobov TKB-059 fired three-bullet salvos through its three barrels. 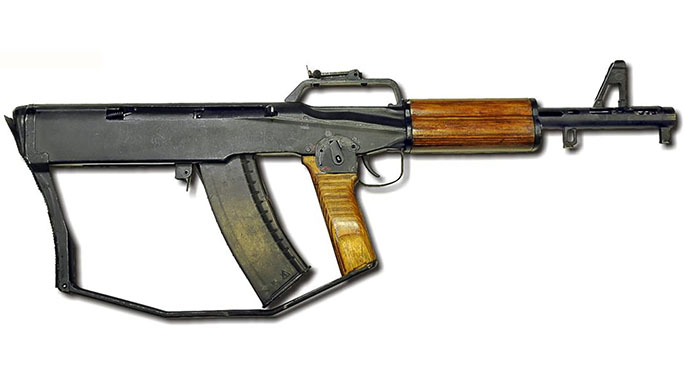 7 of 11
Soviet R&D: The Many Experimental Weapons of the USSR
The entire receiver of this 5.45x39mm Nikonov prototype recoiled within the stock, and a large guard protected the magazine. 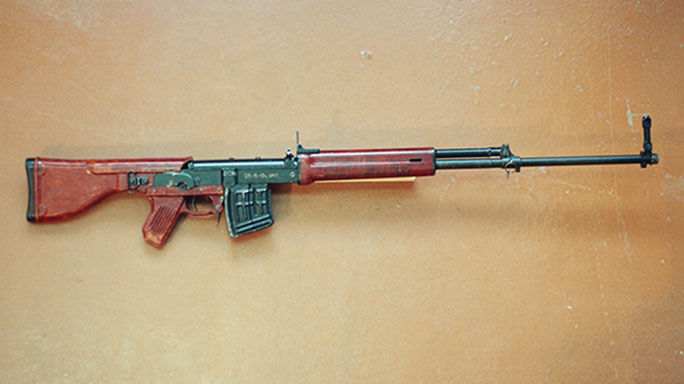 8 of 11
Soviet R&D: The Many Experimental Weapons of the USSR
The Konstantinov sniper rifle’s plastic furniture couldn’t handle its 7.62x54R recoil. 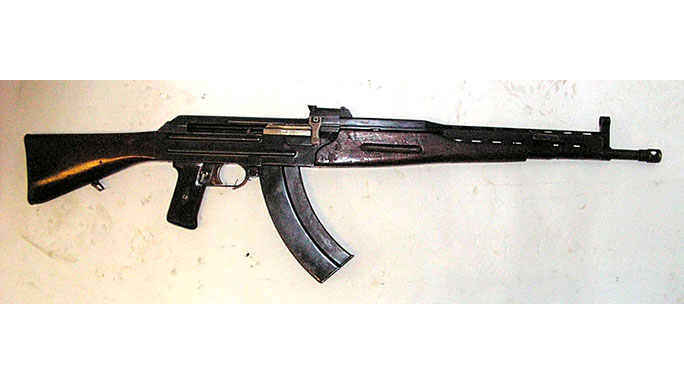 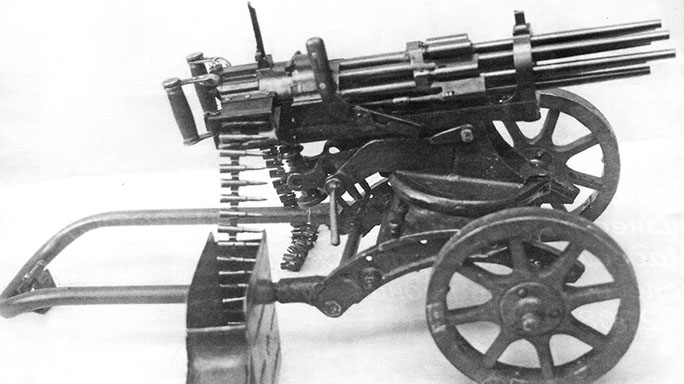 10 of 11
Soviet R&D: The Many Experimental Weapons of the USSR
This extremely fast-firing Slostin machine gun from 1939 poured 7.62x54R rounds out of its eight barrels. 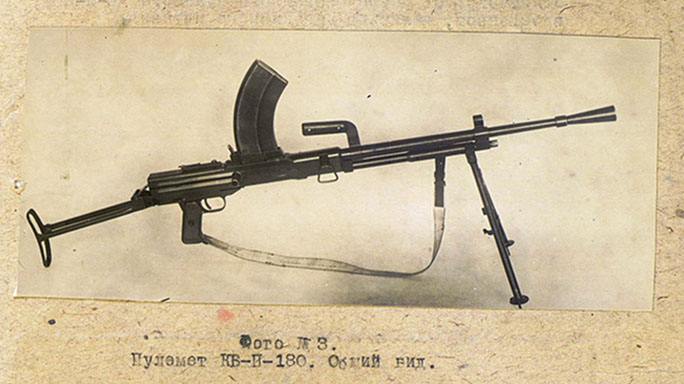 11 of 11
Soviet R&D: The Many Experimental Weapons of the USSR
The 7.62x54R KB-P-180 light machine gun was developed in 1942 by Degtyaryov to replace the DP-27, but it was rejected for unknown reasons. 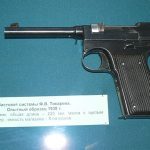 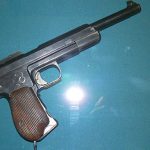 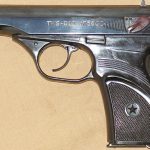 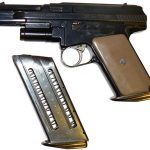 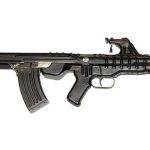 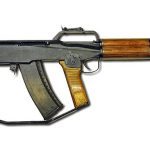 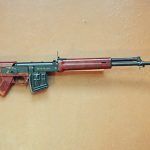 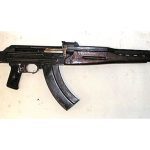 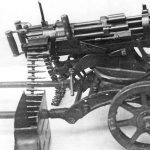 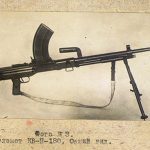 Service handguns were among the first indigenous small-arms developments in the Soviet Union. In the mid-1920s, the Red Army was armed with a mix of obsolete Nagant M1895 revolvers and some Mauser C96 pistols purchased from Germany. Thus, the military needed a new service pistol, and the late 1920s saw a number of experimental developments in this field.

Among others, for a brief period the Red Army pursued the “large pistol” concept, unquestionably inspired by the iconic Mauser C96. As a result, Fedor Tokarev designed a rather huge pistol with a 22-round magazine in the grip, a detachable shoulder stock/holster and a select-fire capability. Without the shoulder stock, it weighted 3.7 pounds with an empty magazine, and was 12 inches long. It fired 7.63x25mm Mauser ammunition. Not surprisingly, this monster never went past the prototype stage, as the Red Army selected much more compact Tokarev TT pistol as its new standard sidearm in 1931.

However, by the late 1930s, the TT was found lacking in some respects. For one, it was not suited for use by tank crews because the firing ports in turrets were originally designed for pencil-thin Nagant revolver barrels. By 1939, the Red Army was already testing several semi-automatic 7.62x25mm pistols with thin, exposed barrels, but World War II broke out before the trials were completed, and the TT remained in production throughout the war.

In 1951, the TT was replaced by an entirely new pistol, the Makarov PM, which was effective and reliable but a bit heavy for a compact sidearm. Therefore, in the early 1960s, Soviet manufacturers began experimenting with lighter Makarov pistols, first using aluminum alloys and later switching to modern polymers. By the mid-1960s, the Soviet Army was testing a TKB-025 pistol that had been designed in Tula. It was based on the PM but featured a polymer frame with an integral triggerguard. The TKB-025 passed military trials with good results but was eventually rejected because the army did not trust the longevity of contemporary polymers under variety of service conditions (arctic cold, desert heat, etc).

It should be noted that in the post-war era, handguns were rather low on the army’s list of priorities, but we will mention another one before turning to larger guns. The Gerasimenko VAG-72 pistol was designed in 1972. But the VAG-73 that came out a year later is even more interesting. It featured a large 48-round magazine, made as a tandem box with two compartments. It also fired proprietary “caseless” 7.62mm ammunition that consisted of a projectile with a hollow base that contained the propellant and primer. This ammunition concept was similar to the 19th century Volcanic pistol, and it similarly failed to attract any military buyers.

Soviet designers began developing assault rifles as early as 1944. By 1947, more than a dozen designs were tested before the Soviet Army finally adopted the now-famous AK-47 rifle. One of the lesser known, but still historically important, designs of that era was the Bulkin AB-46 rifle, which competed directly against the Kalashnikov designs in 1946 and 1947. It outperformed the original Kalashnikov AK-46 in the trials of 1946, only to lose to the redesigned AK-47 a year later. Probably most irritating for its designer was the fact that the AK-47 borrowed heavily from the AB-46, which itself changed very little between 1946 and 1947.

The adoption of the AK-47 spurred further developments in an attempt to make new rifles cheaper, simpler and more accurate. One of the most persistent but unlucky Kalashnikov rivals of the time was designer German Korobov, who worked in Tula. From the 1940s to the 1970s, he produced a respectable number of highly effective and interesting weapons that were turned down by the army for various reasons. One of his earlier designs was the 7.62x39mmm TKB-512, a lightweight, delayed-blowback-operated rifle with a stamped-steel receiver, which spurred development of the new Kalashnikov design that later became the AKM.

In the 1960s, Korobov worked in several directions. First, he tried to improve hit probability by following the same “shotgun” concept as American SALVO/SPIW systems. To this end, he built the 7.62x39mm TKB-059, a three-barreled, salvo-firing weapon. It was recoil operated, using a single bolt for all three barrels and a triple magazine. Firing three-bullet salvos, the TKB-059 achieved a noticeable increase in hit probability at the cost of increased weight, complexity and felt recoil. Later on, Korobov and his colleague, Nikolay Afanasiev, worked on a series of 7.62x39mm assault rifles using newly developed polymers for receivers and furniture. Throughout the 1960s they produced several polymer-stocked weapons, mostly in bullpup configurations.

During this same period, the army began looking for a new sniper rifle. Among several entrants, a 7.62x54R Konstantinov semi-automatic sniper rifle stood out with its brick-red plastic stock. However, it was found less accurate than the more conventionally stocked Dragunov rifle. Also, judging by surviving photos, the plastic proved to be less durable than originally expected, chipping and cracking from the recoil of the powerful 7.62x54R ammunition.

Some rather interesting and unusual rifles were born during the 1980s in an attempt to produce weapons capable of good accuracy in full-auto or burst-fire modes. Developed under the requirements of the “Abakan” R&D program, these included several systems that used a variety of more or less novel concepts. One of the most promising concepts was the “delayed recoil” system, where the receiver and barrel group were allowed to recoil inside a stock for a duration of a short, controlled burst of two or three rounds. The most notable proponent of this system, and the eventual winner of the entire trials, was designer Gennadiy Nikonov from Izhevsk.

In the early 1980s, he designed a series of prototype 5.45x39mm assault rifles with receivers that recoiled against the stock. Nikonov experimented with the magazine’s position—behind the pistol grip in his NA bullpup of 1981, then on the right side in his AS rifle of 1984 and finally in front of the pistol grip in his AS rifle of 1986—before finally dropping the concept of allowing the magazine to move (which was obviously not well suited for military use) in favor of a stationary magazine and two-stage cartridge feed system, which he refined in the late 1980s for his trial-winning AN-94 assault rifle.

Machine guns also were of high importance for the Red Army. During the 1930s, some of the Red Army’s experts and small-arms designers became obsessed with high rates of fire. This resulted in the 7.62x54R ShKAS aircraft machine gun, which fired 1,800 rounds per minute from a single barrel. In late the 1930s, it was followed by even faster single-barrel aircraft machine guns—the Ultra-ShKAS and SN—which both clocked in at 2,200 to 2,400 rpms. However, these airborne weapons were badly suited for ground use, and the army wanted its own machine guns for use against low-flying attack aircraft and ground targets.

One of the most interesting attempts to produce such weapons for ground use is attributed to designer Slostin, who produced a series of eight-barreled 7.62x54R machine guns by the late 1930s. The barrels were arranged in a rotating cluster, but unlike the well-known Gatling system, Slostin guns were self-powered. Also, there were no sliding bolts in his guns; instead, the barrels moved forward and backward against individual, stationary breeches, being operated by cross-linked gas pistons and chambers. These machine guns achieved firing rates in excess of 6,000 rounds per minute. However, war broke out before they were perfected, and the guns were never adopted.

Despite that, the idea of the fast-firing, multi-barrel machine gun lived on after WWII, to be materialized again in a monstrous, eight-barreled heavy machine gun firing very powerful 14.5x114mm ammunition. This gun, also designed by Slostin, was intended to be used on super-heavy IS-7 tanks as their primary guns. However, all six of the IS-7 tanks that were actually produced were armed with two slower-firing but much more reliable 14.5mm KPVT machine guns that complemented their other weapons, which included a 130mm main gun and six 7.62mm SGMT machine guns.

In terms of more conventional guns, during WWII the Red Army sought to replace its 7.62x54R DP light machine guns with a more effective, reliable and maneuverable weapon in the same caliber. About a dozen guns from various designers were tested between 1942 and 1943, mostly fed using convenient 20- to 30-round box magazines, but none were chosen. Instead, the Red Army adopted a slightly improved DPM machine gun, which served with frontline units until the late 1950s.

This article is only a small glimpse of the huge amount of small-arms R&D that was conducted in the Soviet Union from its inception and until its fall. Most of this work never resulted in adoption or mass production. Unfortunately, in the Soviet Union, any small-arms work, however trivial, was automatically classified as “secret,” and accessing most records is still very complicated or impossible, as many reports and experimental weapons were destroyed once they weren’t needed anymore.

This article was originally published in ‘AK47 & Soviet Weapons’ 2017. To order a copy, please visit outdoorgroupstore.com. 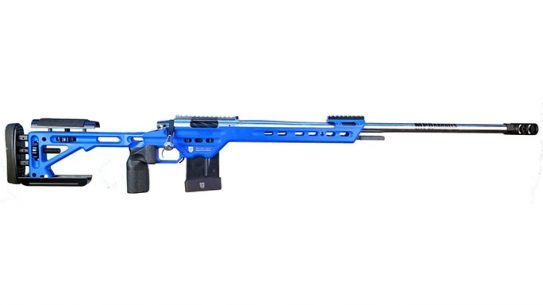