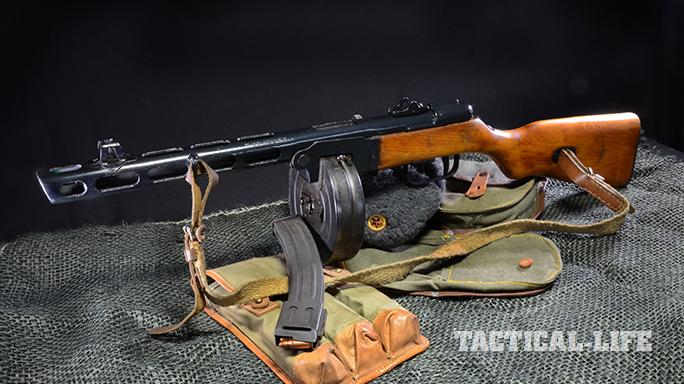 1 of 10
Photo by Ken MacSwan
Soviet PPSh-41
“The Soviets supplied many PPSh-41s to the North Koreans and Red Chinese, who used them in human-wave assaults…” 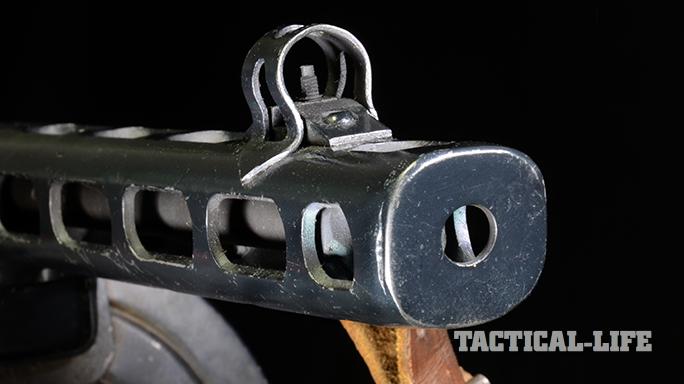 2 of 10
Photo by Ken MacSwan
Soviet PPSh-41
The front of the barrel shroud serves as a muzzle brake to help reduce recoil and muzzle rise. 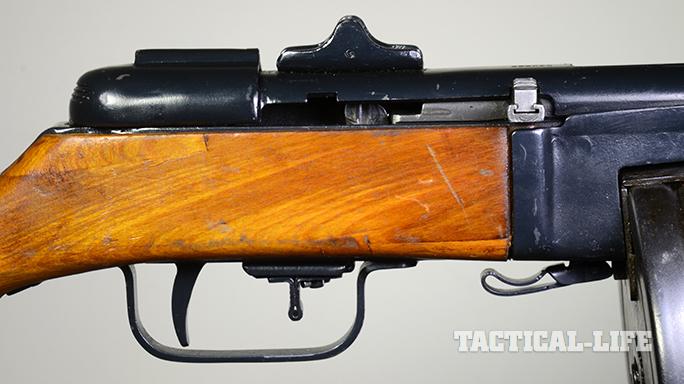 3 of 10
Photo by Ken MacSwan
Soviet PPSh-41
The safety is incorporated into the charging handle, while the selector switch is located just forward of the trigger. 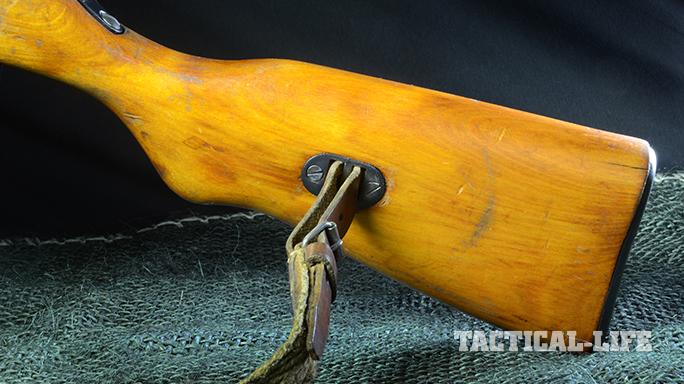 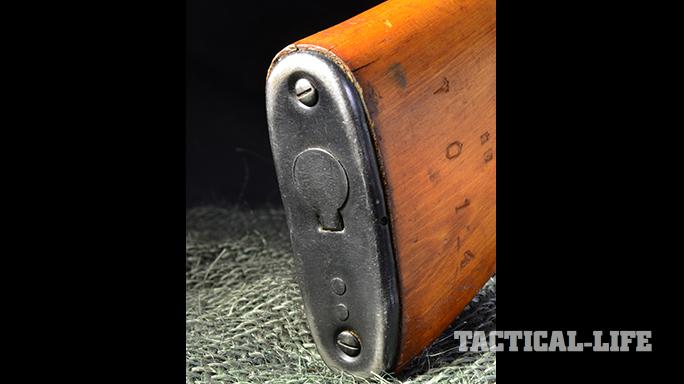 5 of 10
Photo by Ken MacSwan
Soviet PPSh-41
The buttplate features a storage compartment for a cleaning kit. 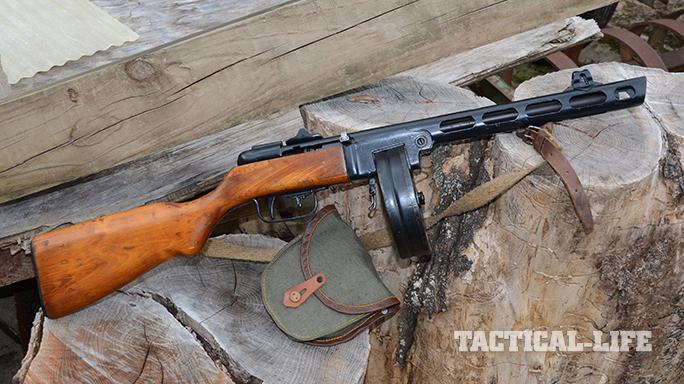 6 of 10
Photo by Ken MacSwan
Soviet PPSh-41
Using a 71-round drum magazine brings the PPSh-41’s weight to around 12 pounds, making it one of the heavier submachine guns of WWII. If you run one now, make sure you don’t load the drum to its max capacity for better reliability. 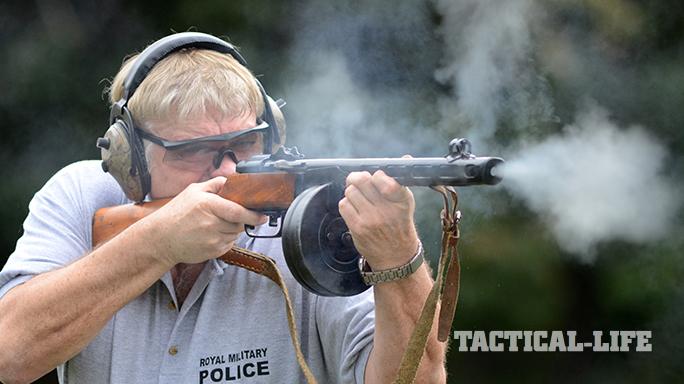 7 of 10
Photo by Ken MacSwan
Soviet PPSh-41
In testing, the PPSh-41 was quite controllable and easy to use, though the drum magazine makes the gun a little less handy than the stick magazines. 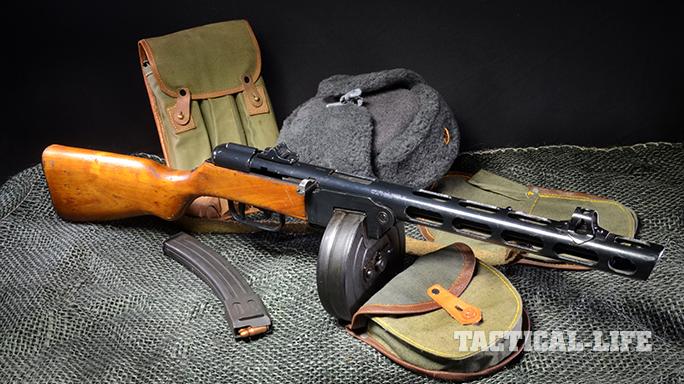 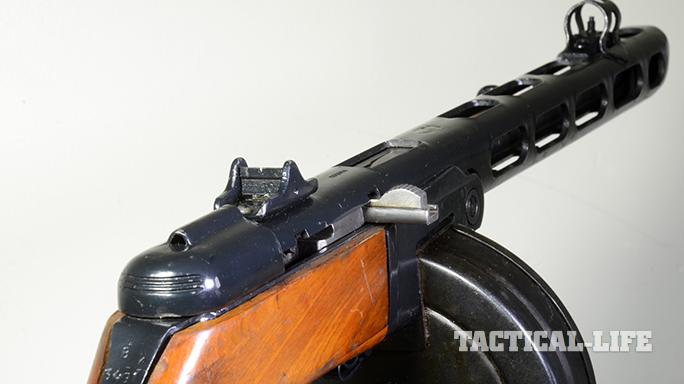 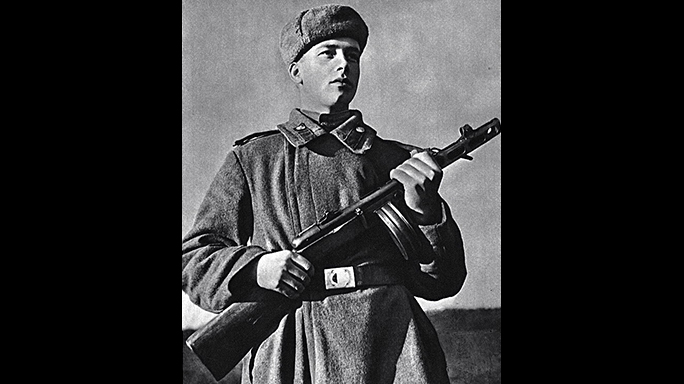 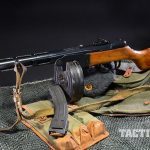 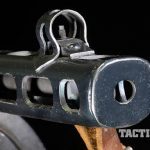 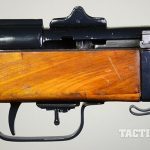 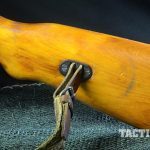 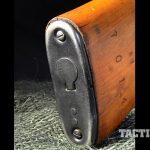 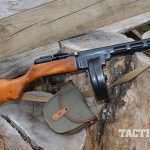 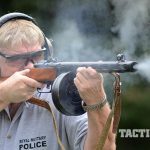 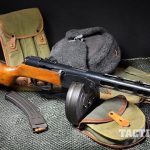 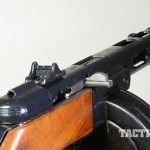 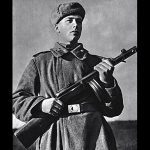 Generally, I don’t think of Russian weapons as being elegant, but for some reason, the PPSh-41 has always struck me so while being utilitarian. Conversely, I consider its replacement, the PPS-43, one of the ugliest weapons I’ve ever used. It’s very functional but still ugly.

For me, the most vivid image of the Soviet PPSh-41 is of it in the hands of tank riders, the Soviet infantry who went into battle riding T-34s. Many other Soviet troops also used the PPSh-41. Entire infantry units were equipped with the weapon, and by some estimates, 5 to 6 million PPSh-41s were produced during World War II. Many troops were likely equipped with the gun. At a distance, having a PPSh-41 was a disadvantage, but during an assault at closer range, it could deliver a withering hail of fire.

PPSh stands for “pistolet-pulemyot Shpagina,” or “Shpagin’s machine pistol.” Georgi Shpagin designed it. The 41 was derived from the year (1941) the PPSh-41 was developed and put into production. To some extent, the PPSh-41 owes its development to the Finnish Suomi, which was used effectively against Russian troops during the Winter War. Designed for fast, inexpensive production by semi-skilled workers, the PPSh-41 had only 87 component parts and could be produced by using relatively simple tooling in smaller shops. Stampings were used for the receiver and barrel shroud, and the barrels were often taken from M1891 Mosin-Nagant rifles before being cut in half and chambered for the 7.62x25mm Tokarev round. It took approximately 7.3 machining hours to produce a single PPSh-41.

The Soviet PPSh-41 is a blowback-opertated weapon that fires from an open bolt. A striker is permanently attached to the bolt face. To cushion recoil on full-auto, a fiber buffer is affixed to the return-spring guide rod. The safety and selector are, in my opinion, of much better design than those on many other mass-produced World War II submachine guns. The safety is incorporated into the cocking handle, and pushing a slider on top of the cocking handle inward locks the bolt to the rear or forward. The selector is a switch inside the triggerguard, just in front of the trigger.

For ease of maintenance, the receiver is hinged and can be rotated upward for cleaning. The barrels were also chromed, which countered the effects of the corrosive ammunition used. Another interesting feature is the barrel shroud, which incorporates a crude muzzle brake that extends at an angle in front of the barrel. The muzzle brake helps dampen muzzle climb to some extent but also increases noise and muzzle flash. The wooden stock is more comfortable than many skeletonized steel stocks on other WWII designs. The rear sight uses flip-up apertures for 100 and 200 meters.

The paddle-style magazine release is located behind the magazine well. The Soviet PPSh-41 looks best with the 71-round drum magazine (based on the Suomi’s), but many users prefer the 35-round stick magazine. The 71-round drum takes quite a bit of time to load, however. As with AK drums, you remove the cover, wind the rotor and insert the cartridges. Also, for the best reliability, only about 65 rounds should be loaded. Still, a PPSh-41 doesn’t look right to me without the drum. Soviet infantrymen often carried a drum in the PPSh-41 and spare stick magazines in pouches or pockets. A PPSh-41 with a fully loaded drum weighed 12 pounds, so although it was relatively short and handy, it was heavy. A sling is also important when carrying the PPSh-41. Soviet troops often carried them slung across their chests.

The PPSh-41’s cyclic rate is fairly high—900 rounds per minute—but the weight and rudimentary muzzle brake helped keep the muzzle on target. Many Soviet conscript infantrymen were not especially well trained when thrown into combat, and they likely emptied their drums in one or two bursts until they gained combat experience. At that point, some might have flipped the selector switch to the rear for semi-auto fire at longer ranges.

Although many submachine gun aficionados are especially fond of the German MP38 and MP40, German troops on the Eastern Front liked the Soviet PPSh-41 and often used captured ones in combat. Obtaining ammo wasn’t a problem, as the 7.63x25mm round used in the Mauser 1896 Broomhandle was almost the same as the 7.62x25mm Tokarev round. Captured PPSh-41s were given the German designation MP717(r), with the “r” standing for Russian.

Some captured PPSh-41s were converted to 9x19mm and designated as the MP41(r). Whether in the hands of Soviets or Germans, the PPSh-41 was probably especially useful during the Russian winter, as the high-speed 7.62x25mm Tokarev—particularly the armor-piercing (AP) load—could punch through heavy winter clothing.

After WWII, the Soviets supplied many PPSh-41s to the North Koreans and Red Chinese, who used them in human-wave assaults against United Nations positions during the Korean War. North Korea and China also produced their own versions of the weapon—the Type 49 and Type 50, respectively.

During the Korean War, U.S. GIs called PPSh-41s “burp guns” because of their distinctive sound on full-auto. Appreciating the PPSh-41’s lethality at close quarters, they used their M1 Garands, M2 Carbines and Browning machine guns to try to keep the Chinese and North Koreans at a distance. Various other Soviet allies—including Hungary, Poland and Yugoslavia—produced versions of the PPSh-41, and a dozen other countries used it.

When I did my first foreign weapons training, I was disappointed: We used a PPS-43, not a PPSh-41. However, I eventually got a chance to do lots of shooting with the weapon, once in Finland with a PPSh-41 captured during WWII. I was glad to get the chance to shoot the weapon again for this article. I felt a little guilty about one thing, though. My friend who owns the PPSh-41, which is registered, had loaded the magazines, and I shot them dry, dodging a tedious task. I owe him big time.

One interesting aspect of shooting the PPSh-41 is how you place your support hand. I’ve seen WWII photos of Soviet troops firing it with their support hand in front of the triggerguard and behind the magazine, or with the support hand just in front of the drum, grasping the receiver in front of the magazine well or slightly forward of that, with the barrel shroud resting on the front of the palm. I’ve typically used the latter method, as I find it gives me the best control of the weapon on full-auto. Occasionally, I’ve seen photos of the PPSh-41 being fired with the drum magazine resting on the palm of the support hand. I wouldn’t think that would offer much control on full-auto unless the shooter gripped the magazine tightly, which could pull it and increase the likelihood of a malfunction.

My experience has been that, with good (not overloaded) drum magazines or stick magazines, the PPSh-41 is very reliable. Original drum magazines were, I believe, serial-numbered to the gun, and those worked most reliably. I did all of my shooting at plates from 50 yards, mostly reacquainting myself with the weapon’s operation.

I used the safety whenever I stopped shooting and found it was easy to push in, but switching to “fire” usually required using my shooting-hand thumb. The paddle-style magazine release was a little small and, given that Soviet troops were often fighting during the Russian winter, would not have been too mitten-friendly. The selector switch was easy to pull back into the semi-auto position or nudge forward into full-auto with my trigger finger. As advertised, the slanted front of the barrel shroud helped dampen muzzle flip, but there was a lot of noise and flash. At 50 yards, the sights were usable, and on semi-auto, I hit the plates frequently.

It had been a few years since I shot a Soviet PPSh-41, and it remains one of my favorite World War II submachine guns. As much as I like the PPSh-41, however, I don’t think I would’ve wanted to carry one while precariously clinging to a T-34 tank, especially when there would be other poorly trained conscripts clinging to it, too, their hands and bodies possibly cold—which they might have attempted to warm with vodka. At times, I imagine, we’d have bounced along with the bolt open on our weapons; ones loaded with highly penetrative .30-caliber ammunitation. I like the weapon and picturing the tank riders, but I wouldn’t want to be one, even if I got to carry a Soviet PPSh-41.

This article was originally published in “Military Surplus” 2018. To order a copy and subscribe, visit outdoorgroupstore.com. 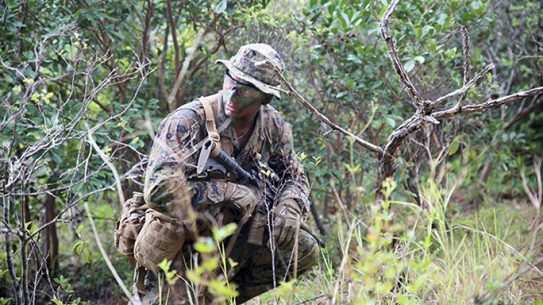 The fourth and final testing phase for the new Marine Corps tropical uniform and...

How 2 Pro-Gun Governors Expanded 2A Rights During the COVID...