0
SHARES
8
VIEWS
Share on FacebookShare on Twitter
EDITOR’S NOTE: The author is a veteran of the Spanish Army in N. Africa. He continued his career in advanced sniper instruction. He’s trained by some of the best and has trained several Spanish and foreign elite combat units. He’s co-author “Ultimate Sniper en Español, the bible of spanish snipers with Maj. John Plaster. 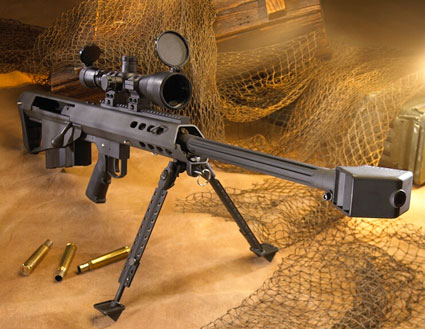 In Spain, hunting has been a tradition among families, and our shooters have always been terrific marksmen. You might even say that Spain is a country of snipers. The quest for flat-shooting, hard-hitting rifles has followed the Spanish infantry for centuries. Some old-time Marines know what I mean. They faced the Spanish draftees with their Mausers back in the
American/Spanish Cuban war.

In Spain we call snipers “pacos”—for the sound the bullet makes when it passes close to you. The most powerful rifle the Spanish “pacos” have ever fielded is the object of this article.

The Model 95 was a fantastic weapon created for the Special Forces soldier who needed a very portable platform of accurate .50 BMG fire—and with a high cadence of fire, not at the level of a semi-auto Model 82A1/Model 107, but much higher than a single-shot Model 99. In this role the Model 95 has excelled, exhibiting the same precision of much heavier weapons from other manufacturers, but in a much lighter package.

Even though Spanish Special Forces snipers revered the Model 95, these professionals felt the rifle had room for improvement. They even prepared a short “wish list” that was transmitted to Barrett Manufacturing.

The new night vision devices and thermal optics available dictated an enlargement of the Mil-Std-1913 rail, to be adapted to the future equipment and accessories. The magazine of a similar design to the Model 82A1 unit needed reliability improvements. A rear monopod was badly needed for the long United Nations observation missions. Also mentioned was the fact that most operators were interested in the latest scope designs.

On a visit to Spain in 2004, Ronnie Barrett listened to these user comments and took the Model 95 back to the drawing board. All of the requested modifications were contemplated.

Barrett’s R&D team found a way to incorporate most of our requested repairs into the new Generation II rifle. Our Model 95s also benefited from knowledge derived from Barrett’s new M107. The M107’s more efficient three-chamber muzzle brake reduced stress on the shooter and on the rifle. Leupold’s M4 LRT scopes were chosen to complete the system. Ronnie offered this program for all of the Army’s old Model 95s at a very special price. He wanted his Model 95 to be the best .50-caliber repeater in existence and the Spanish Army desired the same thing. In 2005 the Spanish Army agreed to have Barrett begin work on the rifles.

New Favorite: Model 95SP
Barrett’s quality improvements and new CNC machinery made possible a crisp and repeatable trigger. This was designed as part of a bolt upgrade that included delivering the same trigger pull in all the rifles and full parts interchangeability. That made logistics much easier. The magazine received a new spring and interior treatment. Spanish snipers had asked for a rear monopod and Barrett designed one for the Model 95SP— the first one in the Barrett line.

Now the operator could shoot more and shoot more comfortably, and on an 11-kg (24.2 pounds) .50 BMG, this is an important creature comfort. The rifle is not as pleasant to shoot as the M107, but shooters can now shoot up to 25 to 30 rounds a day without suffering the typical .50-caliber, afternoon-at-the-range headache.

One of the most-sought-after features was the inclusion with each rifle system of a more complete Spanish Operator’s Manual. Consistent with their legendary high quality customer service, Barrett not only included an Operator’s Manual, but also included a full Optics System Manual. This covered the new Leupold Ultra M4 4.5-14x50mm scope and the Simrad KN202 FAB night vision device that is included in the system. I was commissioned to assemble the new manuals, and thanks to Paladin Press was able to include in them excerpts of my book The Ultimate Sniper en Español that helped new snipers to use the mil-dot reticle to its full potential. 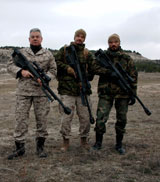 Operator Manuals and Training
In February of 2005, as part of the delivery of the first batch of 44 new Model 95SPs, Barrett included an Advanced Operator Course taught by the author. Tactics and techniques are taught at this Operator Course to the already-certified snipers. The snipers, who in the most cases are seasoned .50 BMG snipers, get in touch with the new developments in extreme range ballistic calculations and software systems that can help them achieve first shot hits at 1,500-plus meters.

The Model 95SP displays the full capability of the Nammo Raufoss NM-140 Grade A cartridge. (U.S. nomenclature for this ammo is MK-211.) The NM-140 Grade A used by the Spanish Army, Navy and Air Force is assembled in Norway with Canadian brass and exhibits the same basic behavior of the U.S. MK-211. The Model 95SP system has demonstrated consistent 1.5 MOA accuracy at 1,000 meters, sometimes even better than that, with the NM-140 Grade A.

I am personally against the sniper use of handloads if loaded in small batches. However, the performance of the Model 95SP has been tested with them and I can testify that, with cartridges based on Hodgdon powder and 750-grain AMAX bullets, I have seen consistent groups under 1 MOA at 1,000 meters and beyond.

Recently I have helped in the test phase of new Nammo Raufoss ammunition called Special Grade, or SG, which replicates NM-140 ballistics with an inert FMJ bullet. It is at least as accurate as NM-140, so shooting 10-shot groups under 1.5 MOA at 1,000 meters with affordable factory ammo is now a reality. The tests run by the Spanish Army as part of the SG ammunition adoption program showed a clear accuracy benefit over M33.

Improving the Optics
One of the inclusions on the new Model 95SP weapon system was the Leupold M4 4.5-14x50mm LRT M1 with Mil-Dot reticle. This scope is a substitute for the Swarovski. I have never been fond of anything that decreases the precision in a sniper system. The Swarovski Christmas tree reticle allows for novice shooters to effectively hit targets and it provides for quick target acquisition, but it lacks the trajectory precision and the adjustment capabilities of a true long-range sniper scope. It surely gets a job done and has served well, but the properly trained sniper with the M4 will still hit targets just as quickly, and will also have an extreme range anti-personnel capability well out of reach of the Christmas tree design.

The Leupold M4 LRT index-matched optic is superb. It is the equal of and in many regards superior to our Schmidt and Bender scopes that equip our Accuracy International AW 7.62x51mm sniper rifles. The M1 Leupold turrets with 1/4-inch MOA adjustments add both precision zeroing capability and trajectory compensation for true long-range work. It is a workhorse of a scope. I would prefer the same scope to be equipped with an illuminated TMR (tactical milling reticle). This is the setup I carry on my rifle, and I hope that in the future the Army contemplates an upgrade that would help snipers to better estimate ranges and hit small targets at extreme distances when an active system such as the Vector or the Simrad LP10 is not a viable option.

Barrett adjustable rings are included and offer an extra 50 MOA of elevation to be added to the Leupold’s M4 100 MOA, for a full 150 MOA that will allow the sniper to zero at any distance and still shoot at extreme ranges.

The Spanish Navy Marine Infantry selected this same optic configuration after they tested my personal rifle. They ordered the new Leupold M4 LRT with illuminated TMR to replace their Swarovski and Schmidt and Bender optics mounted on their AW 7.62x51mm rifles.

The Simrad KN202 FAB is a piggyback system in service in many of the NATO armies, including the U.S. Marines. Even though the new inline systems are improving, it is still the king of the NVD. With the new Generation 3 64 and 84 lp/mm tubes and the big 100mm catadrioptic lenses, the Simrad’s light gathering capabilities are unparalleled. My personal KN202 is just a Generation 2+ 64lp/mm with a XR-5 tube, and even though there are inline systems that show more gain and provide an ergonomic advantage, none of them are able to discriminate long-range targets as well as the Simrad. The Spanish Army had been using the KN200 family for many years with great satisfaction and have experienced virtually no failures. I have extensively tested most European inline systems and have tested the AN-PVS22. I believe that the Simrad is still the best solution but competitors are gaining fast.

The Model 95SP is a dream-come-true for the Special Forces sniper. If you asked me if I would trade the Model 95SP for any other rifle for this purpose I would say no. Having an Model 82A1 for those missions when multiple targets are sure to appear would be fine. I would gladly trade some portability for an increased rate of fire. Perhaps the Spanish Army will find the M107 useful for their motorized units. Until something better comes along, probably from Barrett, the Model 95SP is the best
there is.