Speared by an RPG 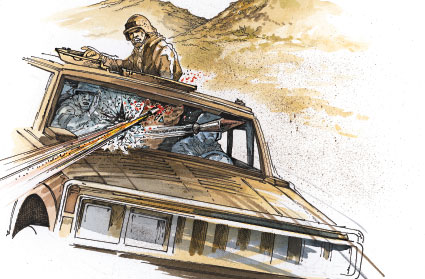 “I was scared shitless.”

That may seem like a strange assessment, coming from a surgeon. Add in the fact that the surgeon speaking is a U.S. Army Officer, and the candor gives hint of the dramatic story to come.

In this drama, there were several leading players, including the surgeon, Major (then Captain) John Oh, his operating team, and the patient, Specialist Channing Moss. The stage where this drama played out was an aid station of the 759th Forward Surgical Team in Southeastern Afghanistan, in March, 2006. Captain Oh had never seen a RPG (Rocket Propelled Grenade) before. Now he was working with one—a live one—embedded in the blood and guts of Specialist Moss. The ordnance could explode at any second, killing everyone for yards around.

Moss was hanging on to life by a slim thread, and his body was a living, bleeding booby trap. By-the-book, protocol is to leave such a patient outside, sandbagged, isolated and dying. Captain Oh and his team would have none of that. They gladly volunteered to risk their own lives to save this brave soldier.

Specialist Moss’ fight for life had begun a couple of hours earlier when a deadly ambush and fierce firefight had left him impaled on a—thus far unexploded—RPG round that ran through his abdomen. The tail fin of the rocket’s aluminum housing protruded from his torso. Moss was hit during his infantry platoon’s first patrol since arriving in-country. His Humvee, of the 2nd Battalion, 87th Infantry, 3rd Brigade Combat Team, 10th Mountain Division, was last in a line of five vehicles when the ambush occurred. Moss, then a private first class, was manning a Mark 19 automatic grenade launcher in the turret of his up-armored vehicle, when suddenly he heard an explosion and “the sound of ping, ping, ping” as small-arms fire ricocheted off his Humvee.

The attack had come from a ridgeline, and Moss was hit when the RPG came through the front windshield, sliced across the face of the vehicle commander Staff Sergeant Eric Wynn (shearing off the tip of his nose and tearing his upper lip), and streaked deeper into the vehicle, where Moss sat in the gunner’s sling. For the first time that day, Moss got lucky: The RPG did not detonate!

Moss’ fellow soldiers did what they could to keep him alive, wrapping all the gauze and all the bandages they had around his bleeding wounds and the protruding ordnance, to keep it stabilized. Moss was sometimes screaming from the pain, begging for help while waiting for the medvac helicopter to come.

“I didn’t really know what was in me,” Moss recalled later to Army Times Staff Writer Gina Cavallaro. “I could just hear my sergeant saying, ‘Hold on, hold on.’ I didn’t think that bird was ever going to come.”

The crew of the Black Hawk knew the soldier in the litter was literally a bomb waiting to explode, but they gritted their teeth and did their job, depositing their patient at Caption Oh’s aid station operating room.

To Hell With Protocol
“The guideline is you’re not supposed to bring them [patients with embedded live ordnance] into the aid station,” said Major Oh, recently describing the events that unfolded that day. “You leave them outside…like what we call an ‘expectant’ patient. So you treat him like he’s going to blow up. You’re treating him like he’s not going to survive.”

Major Oh continued, “You look at the guy, and you think, ‘There’s no way I’m going to let this guy die…just can’t happen…can’t happen.’”

Oh asked for volunteers to stay in the operating room and assist as he tried to save Moss’ life. Several soldiers raised their hands.

“The EOD [Explosive Ordnance Disposal] said the bomb could go off at any second,” said Major Oh. “The thought went through my head that these were the last people I was ever going to see…potentially.

“I said, ‘If this thing goes off, I want you all to know it’s been great working with you.’”

What followed was a true miracle. The surgeon and his team were able to pull the RPG through and out of Moss’ body, and then go on to repair his grievous wounds and save his life.

Three months later while recovering at Walter Reed Army Medical Center in Washington, Moss attended the birth of his second daughter. The soft-spoken Georgia native had joined the Army to give his family a better life. Missing two-thirds of his intestines, part of his pelvic bone, and with a repaired hip, he has retired on a medical disability.

Moss knows he is alive today because of his fellow soldiers. “I don’t think there has been a day in the last year and a half that I haven’t prayed for them. They saved my life. I knew it was love of my country and brothers in arms. I hope God watches over them if they get deployed.”

Today Major Oh discounts the obvious bravery he showed during the drama. “I don’t think it was a heroic thing,” he says. “For those guys to go outside the wire and put themselves at risk every day. That’s bravery.”