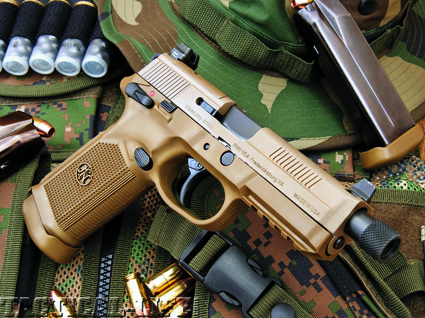 The FNP-45 Tactical is a suppressor-capable .45 ACP pistol ideal for an LE tactical role.

FNH USA brings something new and versatile to the law enforcement arsenal with its DA/SA .45 ACP semi-automatic designed specifically for tactical use. The first thing you notice about the FNP-45 Tactical is its color. The frame is finished in what FNH describes as “Flat Dark Earth,” contrasted by a slightly lighter hued stainless steel slide. The internal design of the FNP-45 Tactical is based on the John Browning style recoil-operated, linkless barrel system.

SOCOM Ready
Initially developed for the U.S. Joint Combat Pistol Program (JCP), the FNP-45 Tactical offers the law enforcement community features originally intended for military use. There’s nothing clandestine about that, just the availability of a handgun designed to operate under the worst conditions in the world. The new semi-auto uses a lightweight polymer frame (6 ounces) with integral checkered grip panels, frontstrap and interchangeable backstraps.

The FNP’s design provides a low bore axis for reduced felt recoil and fully ambidextrous controls for the magazine release, slide release, and safety/decocker; the latter oversized for ease of use. With a chambered round and cocked hammer, the gun can be safely decocked by thumbing the lever all the way down until the hammer drops. (Discharge is prevented by a mechanical blockage of the hammer and firing pin when the decocker is activated). At this point the gun is in double-action mode. Conversely, with the hammer cocked, the FNP-45 Tactical can be carried with the safety engaged in a traditional single-action (1911-style) cocked and locked condition. In short, it is perfect for either carry method. The gun also has a loaded chamber indicator at the right side of the slide with a raised edge that can be felt with the trigger finger, the only feature that is not ambidextrous. 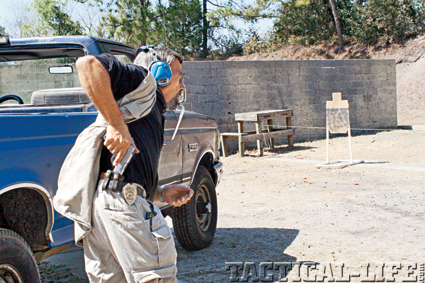 The FNP-45 Tactical is a suppressor-capable .45 ACP pistol ideal for an LE tactical…