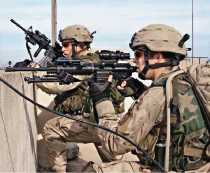 The SPEC OPS EAST Warfighter Symposium and Expo in North Carolina allow defense contractors to form partnerships in a person-to-person environment and interact with military and law enforcement professionals. Operators from all five branches of the US military, as well as personnel from a wide variety of federal, state, and local LE agencies attend the expo. Noticeably present were several foreign special unit operators.

A number of well-known, plus lower profile, companies attended the expo to introduce their products. The following is a review across the spectrum, of just a few of the products seen at the show.

Snipers that attended the show were not disappointed. Remington Military Products displayed a Marine Corps M40A3 precision bolt-action rifle in their new Modular Sniper Chassis. This chassis system features a folding, adjustable butt stock, adjustable cheek rest, and a user-configurable rail attachment interface. The mil-spec Picatinny-type rails allow any and all types of optics, night vision, thermal imagers and lasers to be quickly attached to the rifle chassis. The pistol grip on the chassis is of the M16 type, which allows the individual shooter to take advantage of the wide variety of aftermarket grips that are available. The chassis also allows for the use of detachable 5- or 10-shot magazines. The new Remington chassis will soon be available as standard equipment on new rifles and as an accessory for the M40, M24, and other military rifles.

Lone Star Field (lonestarfieldproducts.com) displayed their Spec-Rest bench rest. The rugged Spec-Rest is a highly precise traverse-and-elevation platform. Spec-Rest allows shooters to accurately engage moving targets or to make micro elevation and traverse adjustments, for hyper-accurate shots. The Spec-Rest is capable of supporting a small .22 caliber up to a heavy .50 caliber. The rest platform and tripod of the Spec-Rest come in an easy to transport carrying case, and can be deployed in the field in 45 seconds without tools.  It’s in use and tested in combat with a number of elite units globally.

LaRue Tactical (laruetactical.com) displayed their new SPOTR, which stands for Surveillance Platform, Observation and Tactical Reconnaissance. The SPOTR is a system comprised of a Leupold Mark IV 12-40x60mm scope with a LaRue tactical roll cage frame installed, a Monfrotto tripod, an adjustable Monfrotto ball-head mount, a cleaning kit, a carrying case, and adapters for mechanical/optical interfaces for a variety of current-issue devices. It can be used with the SSMRNS and PVS-14 night vision devices as well as other optical enhancement and thermal-imaging devices. Operators equipped with SPOTR and Insight Tech-Gear (insighttech-gear.com) RULR  (Ruggedized Ultra-Light Rangefinder) have the ability to easily and accurately laser-range a human-sized target out to distances in excess of 3200 meters.

SAAB Barracuda (saabgroup.com) showcased their Signature Concealment Personnel Suit or SCOPES. SCOPES offers snipers and other personnel the technology to remain hidden from observation. SCOPES is produced using SAAB Baracuda’s Ultra Lightweight Camouflage Net materials. Each suit weighs 6 pounds or less and is water resistant so that it will remain lightweight in wet conditions. For added safety SCOPES materials are fire resistant as well. SCOPES provides signature suppression in the visual, near infrared and thermal infrared spectrums. The suits blend with background environments and reduce detection in any climate. SCOPES has demonstrated the ability to block 80 percent of the thermal energy transmitted by the wearer. SCOPES is available in a variety of camouflage patterns for desert, snow, and woodland use and can be produced to customer specifications.

Another type of camouflage system for vehicles and other items was demonstrated by Military Wraps (militarywraps.com). Military Wraps uses high-resolution imagery printed on a mesh material to replicate all manners of environment and terrain. The material can be used to conceal items as small as a handheld radio up to large vehicles such as tanks. Military Wrap technology is also being used to create training ranges that can duplicate various types of backgrounds and building types. These applications can be used on block buildings or shipping containers to make training more realistic.

LWRC (lwrifles.com) showcased their M6 Series of patented short-stroke gas piston operated rifles and carbines. Reported advantages of the M6 are cleaner operation, cooler operation, increased reliability and longer life when compared to existing M16/M4 weapons. The compact M6A2-PSD in 6.8mm was one of the more popular variants being shown. This model features an 8.5-inch barrel and is designed for use by personal security details and in other applications where a compact weapon is needed. The model is typically delivered with a Magpul CTR stock and pistol grip, and can be equipped with a wide variety of customer-specified optics and accessories. LWRC has offerings available in various barrel lengths for military, law enforcement and civilian buyers in both semi-automatic and select-fire.

General Dynamics Armament and Technical Products (gdatp.com) presented their Mk 47 Mod 0 grenade launcher machine gun and LW50MG (Lightweight .50 caliber Machine Gun). The Mk 47 is in operational service with US Special Operations Command and will gradually replace the Mk 19 Mod 3 in US service. The Mk 47 is 37 pounds lighter than the Mk 19 and is substantially more reliable. The LW50MG represents a new generation of a crew-served weapon that offers unparalleled accuracy and mobility, while decreasing the mission weight for soldiers and vehicles. The LW50MG will most likely supersede the long-serving M2HB Browning machine gun.

Boeing (boeing.com) has produced the AN/PRQ-7 CSEL (Combat Survivor Evader Locator) handheld radio. The CSEL radio is a multifunction device that allows personnel to securely transmit position and text messages through the CSEL UHF Satellite Communication System. The radio has an integrated GPS receiver, locater beacon, and a VHF/UHF voice transceiver. When activated by an operator the CSEL radio can automatically transmit their exact GPS location and identification information to combat rescue forces. Enemy positions and strength as well as other vital information can also be exchanged with text messaging to reduce the risk to the survivor and recovery forces.

HTI Special Operations Equipment (htiops.com) offers the Lifesaver bottle which is an all in one ultra filtration water bottle. Bacteria, viruses, parasites, fungi and other waterborne pathogens are removed without using chemicals. Depending on the exact model of filter cartridge used the Lifesaver bottle can filter either 4000 or 6000 liters of water before requiring replacement. It also feature failsafe technology that automatically shuts off the filter cartridge at the end of its useful life.

SteriPEN handheld UV water purifiers made by Hydro-Photon (hydro-photon.com), are an innovative high-tech product that uses UV (ultraviolet) light to treat unsafe drinking water. UV light destroys the DNA of waterborne viruses, bacteria and protozoa. With the DNA destroyed, the pathogens are unable to reproduce and cause infection. SteriPEN handheld purifiers come in various easy to use models configured for campers, travelers, and military users.

Avon Protection Systems (avon-protection.com) is currently fielding the M53 Protective Mask for protection from nuclear, biological, and chemical threats all the service elements of US Special Operations Command. The M53 is also now the standard protective mask of the FBI Hostage Rescue Team and other elite units. The M50 Infantry and M51 Combat Vehicle Crewman models will soon be in widespread issue across the US Armed Forces. A civilian model, the C50, is available to public safety customers.

Individual load carrying equipment and clothing was also featured. MSA Paraclete (paracletearmor.com) displayed their range of releasable modular vests and MOLLE compatible accessories. Eagle Industries (eagleindustries.com) profiled their full range of gear with emphasis on airborne and special operations specific items. Mystery Ranch (mysteryranch.com) had their line of high-end packs on display including their three-Day Assault Ruck that has become a popular choice with US Army Special Forces. The family of fire retardant Combat Assault and Tactical Assault Gloves from Wiley X (wileyx.com) also received much interest. For more information on future Lodestar Group programs check out their website at defensetradeshows.com. 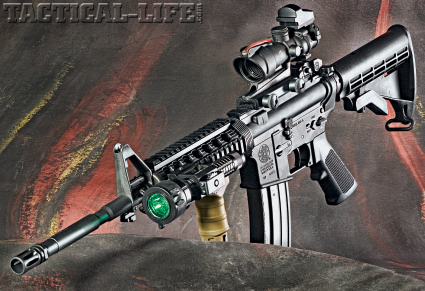