0
SHARES
108
VIEWS
Share on FacebookShare on Twitter
The SPAS-15 offering a good view of the post front sight, notch rear sight on the carry handle, and detachable six-round box magazine.

For many years, armies around the world have been interested in what might be termed an “assault shotgun.” Select-fire shotguns that take box magazines or drums have been tested but have seen no major military adoption. The Russian Saiga semi-auto is available with a folding stock and extended box magazine, which gives it enhanced combat features. Many of the most interesting “assault shotguns,” however, arose due to interest from the U.S. armed forces and Italian armed forces. The 1970s-era U.S. JSSAP (Joint Services Small Arms Program) had developed a specification for a new combat shotgun. Due to Italian laws, combat shotguns are widely owned as home defense weapons in Italy; hence, Italian firms such as Benelli, Beretta and Franchi have developed some very sophisticated combat shotguns. As I understand it, a solicitation for shotguns for the Italian Army some years ago resulted in some especially interesting developments.
These shotguns were to be dual-action type, which means they can be fired as semi-autos for normal combat but may be switched quickly to pump actions to deliver less-lethal munitions. Other requirements included a box magazine to allow fast reloads, folding stock and an M16-type carry handle with sights. Among shotguns developed for possible military sale to the Italian Army and other military and LE agencies were the Benelli M3T, Bernardelli B4 and Franchi SPAS-15. The Bernardelli and SPAS-15 are fed from detachable box magazines. 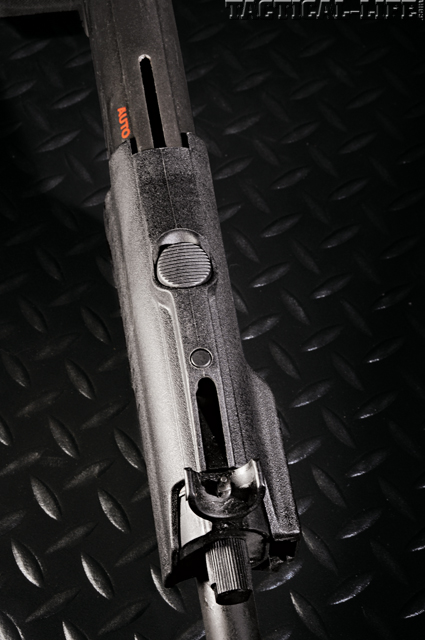 Note the button that must be depressed to switch operating modes from semi to pump or pump to semi on the SPAS-15 shotgun.

The SPAS-15 achieved some military success, having been adopted by the Italian Army and the Serbian Special Brigade. The Italian Army reportedly acquired 2,000 SPAS-15s in 1999, primarily for use on peacekeeping duties. The Benelli M3T, which does not use detachable box magazines in the standard versions, has seen wider adoption by the Czech Republic, Estonia, France, Indonesia, Ireland and Luxembourg. Most users of the M3T are special ops units or special police tactical units. The U.S. Marine Corps adopted a Benelli, but it is the gas-operated M4 rather than a dual-action shotgun. 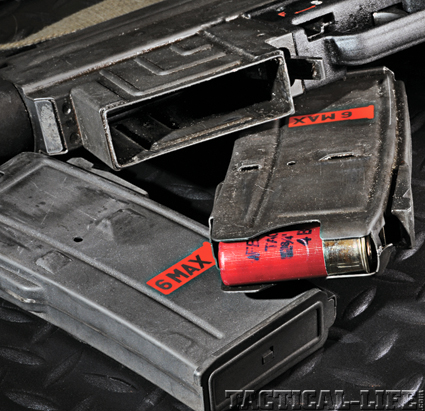 The six-round mags allow fast reloads of 2-¾-inch buckshot rounds, but it takes some practice to properly load them.

Most readers will probably be more familiar with Franchi’s SPAS-12 dual-action shotgun. Its distinctive top-folding, hooked stock has made it a favorite with Hollywood, and it is widely used by French and other special military and police units. A reasonable number of SPAS-12 shotguns were imported into the USA prior to the assault rifle ban, which applied to certain types of shotguns as well. Only a very small number of the SPAS-15, however, entered the USA before the ban. I’ve heard figures as low as 25, but am not sure if this is correct.