by Cameron Hopkins
in Uncategorized
0 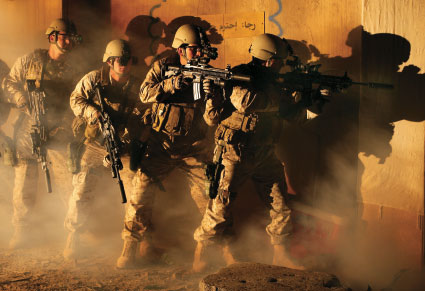 A man’s home may well be his castle, but just as the walls of Jericho came tumbling down, so too will the stoutest of strongholds crumble before a well-equipped and properly trained breacher. Every tactical team has at least a rudimentary capability to enter a locked or barricaded structure, but for a student of the art of breaking things, breaching is a study unto itself.

There are four types of breaching—mechanical, ballistic, explosive and thermal—and they escalate up the danger ladder in exactly that order. I rank explosive breaching as less dangerous than thermal, because we refer here to the degree of danger for the entry team, not the barricaded occupants. As we’ll see, the first three methods of breaching are fast and sudden, but the hapless team stuck with burning through a steel door is going to be there awhile, and the longer the delay, the greater the risk to the team.

Mechanical breaching encompasses a variety of tools, techniques and methods to break down a door or otherwise create a hole with sheer brute force. Commonly used tools include the battering ram, sledge hammer, various pry bars such as the famous Halligan tool, a fireman’s axe, a heavy maul or powerful bolt cutters. Mechanical breaching tools also encompass pneumatic, hydraulic and electric power tools, such as chain saws, reciprocating saws or even the Jaws Of Life.

Ballistic breaching involves the use of a shotgun firing special 12-gauge projectiles designed to blow locks and hinges off doors without endangering anyone on the other side.

Explosive breaching is self-explanatory: the use of explosives to create a hole or entrance.

Thermal breaching is the least used method, utilizing a cutting torch to burn through steel doors, hatches or walls. SEALs train extensively in thermal breaching as two of their typical targets, ships and off-shore oil platforms, are made of steel. 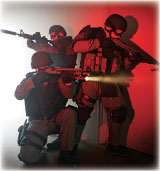 Reason To Enter
At this point, we should stop for a moment and consider just exactly what a breacher is trying to accomplish. The seemingly obvious goal of gaining entry by force is not necessarily as self-evident as it might seem, nor necessarily the only object.

A breacher might only want to create a shooting port for a teammate to insert a weapon, as there may be a need to provide covering fire for an entirely different entry point. Similarly, the breacher might only want to punch a hole to introduce chemical agents such as tear gas. An egress point may be created to allow persons inside, hostages perhaps, to escape. The point is: Not all breaching is done to open an entry point for an armed team to charge through.

Time On Target
For most entries, the biggest factor for the success of the operation is how long it takes to forcibly breach the target site. In addition to speed, breachers usually want to achieve surprise while entering, with great violence of action to overwhelm any defenders waiting inside.

The simplest and fastest breach is to open the door! Doors are occasionally left unlocked, so the first thing for the team to do is verify that the door is in fact barred. If it is secured, then it’s time to call, “Breacher up!”

MECHANICAL BREACHING
When it comes to breaking down a door, crude works. A short, heavy battering ram like BlackHawk’s ThunderBolt entry ram will pulverize a dead bolt right out of the jam of most residential or even commercial doors.

A battering ram is fast and loud, both good things when an entry team wants maximum shock and surprise. Training issues are minimal: Let’s see, who’s the biggest and most experienced operator on the team? A plus is that there are virtually no liability concerns, as there are with ballistic or explosive breaching.

BALLISTIC BREACHING
Ballistic breaching with a shotgun is also fast to set up, but is limited to removing relatively small obstructions, like deadbolts, hinges or locks. Usually, but not always, a ballistic breach is used when there is more than one obstacle to defeat, such as a pair of dead bolts or a set of hinges. An experienced ballistic breacher can blow a set of hinges almost as fast as you can fire a double tap.

A ballistic breach is usually backed up with a mechanical method, such as kicking the door open or smashing the lock with a sledge hammer after the shot goes.

There is a downside to ballistic breaching: This method depends on a weapon to fire a projectile, meaning there is always a chance of failure. Cartridges can misfire, weapons can malfunction. I have yet to see a sledge hammer jam. Additionally, there are some training and liability issues with using a shotgun, but they pale in comparison to the next method—explosive breaching. 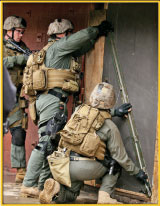 EXPLOSIVE BREACHING
Explosive breaching ratchets up the stakes considerably. Not only does this method require a tremendous amount of training, but also the agency assumes greatly increased liability. The explosive breacher must know how much is just enough: Too little doesn’t solve the problem and too much may remove the problem entirely, trading it for new problems of a different nature.

Most explosive breachers use det cord, set off with a blasting cap or triggered by a nonel (non-electric) fuse ignited by a device firing a shotgun primer. Soft, malleable explosive compounds like C4—literally, Compound Four—are used less frequently, and almost exclusively by military entry teams. I don’t know of a single LE agency that uses C4, although some of the three-letter agencies no doubt have the capability at their disposal.
Explosive breaches are usually set up away from the target site. Det cord is taped to a piece of wooden lath using strips of 100 mph tape, with more strips of tape ready to stick the lath to the entry point, usually a door. When the breacher is called up, he tapes the lath to the door. Explosive breachers can cut a door in half or create a specifically sized entry hole. They can be true artists with TNT.

While an explosive breach is fast when it happens, the set-up time can be lengthy. Two parallel breaches have to be rigged—Murphy knows det cord—and for safety reasons, this has to be done in close proximity to the breach point, right before the green light. No trained operator is going to walk around with “hot” det cord set with a blasting cap for any length of time: In a tragic incident in Iraq, a young Marine was poised at the breach point with a roll of primed det cord under his arm when it suddenly went off. His injury was horrific. This stuff is extremely dangerous, even in experienced hands.

Any breacher worth his salt treats his tools with extreme respect and while the young Marine no doubt followed all the rules, shit happens. When it happens with explosives, the results are usually catastrophic. 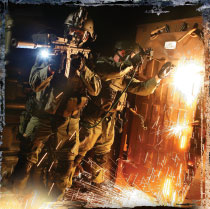 THERMAL BREACHING
The fourth and final method, thermal breaching, involves the use of a torch to produce extremely high heat to melt, burn or vaporize a barrier made of steel or other metal. Thermal breaching is agonizingly slow, making it potentially the most dangerous method for an entry team, as their time on target will be measured in minutes, not seconds. For instance, it can take five, six, even 10 minutes or longer to cut through a ship’s hatch.
Exothermic torches have largely replaced oxy-acetylene torches for breaching purposes. An exothermic torch is fast to get into action and does not emit a secondary gas, like acetylene, that can be dangerous to teammates. Thick steel structures, like I-beams, can be cut in about a minute with an exothermic torch.

Obviously, there is always a danger of fire with a thermal breach. Training is an obvious issue—steel doors to practice on aren’t cheap—but if you need to get inside a steel structure, thermal is the best way to go.

Tactical Considerations
Breaching is a tactic as old as the Bible, continuing through medieval times, right up to Hilter’s “Fortress Europe.” There is certainly a lot of breaching going on in Baghdad—anyone remember the “bunker buster” bombs we dropped? Granted, a 500-pound bomb is none too subtle, but it’s a form of breaching nonetheless.
The whole idea of building a bigger barrier to keep unwanted invaders at bay is as inherent to the art of warfare as the siege engine is for defeating it. In today’s urban applications for LE, breaching should be considered a drastic option to be utilized only when negotiation or other means of affecting an arrest are not feasible.

In perhaps the most infamous case of an inappropriate use of breaching, the Branch Davidian compound was stormed by dozens of BATF agents when anyone familiar with the kooky cult in Waco could have told you that David Koresh regularly stopped into local stores. He was not a recluse by any means. There was just no need to resort to forcible entry to arrest the man.

Deception and subterfuge are often preferable to storming through a door. If you want to go inside, try a ruse to get the occupant to open the door. In a recent entry in New York City, a kindly grandmother’s apartment was breached, a flash bang was thrown and the little old lady died of a heart attack, literally. Tragically, it was the wrong apartment.

This is not to suggest that breaching isn’t a vital tactical tool, but only to note that once a breach goes down, events unfold quickly and unpredictably, even with the most carefully planned and professionally executed entries. Certainly, some circumstances are time-critical, requiring a fast, violent entry to save an innocent party’s life or to prevent further unspeakable horror to victims inside, or preserve known evidence. On the other hand, some situations are better waited out.

When a breach is made, the entry team must flow into the structure with better timing, precision and movement than the most elaborately choreographed marching band. But those sorts of building-clearing tactics are, however, an entirely different subject.