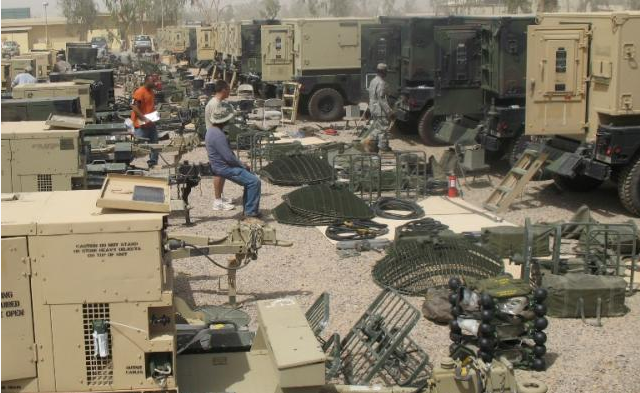 FORT MONMOUTH, N.J. — In line with the current agreement to pull U.S. troops out of Iraq by 2011, the Communications and Electronics Command’s Life Cycle Management Command has stood up a drawdown Special Project Office, or SPO, to coordinate a successful drawdown of a vast amount of command, control, communications, computers, intelligence, surveillance and reconnaissance (C4ISR) equipment fielded in Iraq over the past six years.

“On the materiel side the numbers are just amazing,” said Col. Scot MacKenzie, director of the drawdown SPO. “The amount of property we’ve put over in theater would make any corporation’s jaw drop. Seeing what the Army has deployed around the world is just remarkable.”

Since the beginning of Operation Iraqi Freedom in 2003, the Army has been steadily building up equipment in theater to support its mission. However, with the impending withdrawal steadily approaching, the drawdown SPO was stood up to synchronize and coordinate the responsible drawdown of all C4ISR equipment.

The office is still in its fledgling stage, having just been stood up in July, but it has already begun to analyze and prepare for the onset of the drawdown effort. The office is working closely with all key C4ISR stakeholders to accomplish the responsible drawdown of equipment and personnel.

“There has been a huge investment that the Army’s made in all of the capabilities and it’s been going pretty much in one direction–into theater,” MacKenzie said. “Now we have to pull it out.”

From the onset of OIF, the CECOM Life Cycle Management Command Logistics and Readiness Center has maintained a well-oiled reset operation infrastructure. The drawdown SPO intends to build on that existing infrastructure and use it to its full advantage and potential.

Analysis of future requirements in other theaters, as well as back in the U.S., will help establish the ultimate home of the C4ISR equipment slated to be withdrawn from Iraq. The equipment will be sent where it is needed, whether for immediate alternate operational requirements such as those in Afghanistan, or returned to the U.S. to be repaired and/or put into a larger pool to meet longer-term Army needs.

“The Army has been in this battle rhythm of deployments and now they see a big potential drawdown and re-posturing and resetting of forces,” MacKenzie said. “So as troops and equipment come back, all of that materiel will need to go to different places in the Army for different needs, but it all needs to be reset.”

He noted that if all goes as planned and U.S. troops indeed pull out of Iraq by 2011, much of the equipment will be returning home, which creates a number of challenges that will need to be ironed out. But the biggest change from the status quo will be in the size and scope of the amount of equipment to be reset.

“The scale will change so velocity is going to increase. Where you once had one unit coming home, now you might have three,” MacKenzie said. “There is just going to be more equipment.”

The drawdown SPO serves as the lead to the Responsible Reset Task Force (R2TF) and as the Army Team C4ISR focal point to Department of the Army headquarters, the Army Materiel Command (AMC), the Army Sustainment Command and supporting Army Field Support Brigades.

The AMC, the executive agent for resetting the Army, is standing up the Responsible Reset Task Force, which will be led by Lt. Gen. James Pillsbury, AMC deputy commanding general. The drawdown SPO will work hand-in-hand with the R2TF. It will help integrate the drawdown and make sure that a “responsible drawdown supports responsible reset,” MacKenzie said.

The drawdown project will move equipment out of the theater and have it repaired if needed and that is its line of demarcation. The reset effort then repositions it. Both drawdown and reset must be flawlessly synchronized to achieve optimal results.

“I think the Army is going after this remembering [Operation] Desert Storm,” MacKenzie said. “They remember how that went and they want to improve upon how we do this, so that’s what the whole impetus of what responsible drawdown is all about.”

The intent is for the SPO to assist the C4ISR community all the way through drawdown in 2011. However, if there are changes to the mission and/or current political agreement, the SPO will be prepared to support it, MacKenzie said.

“There are a lot of milestones coming up, but it all goes back to the first big milestone that everybody is watching, which is the (Iraqi) elections in January,” he said. “And then there is also the security environment. Those are variables we’ll shift on and be prepared for. Like any military organization; we’ll be ready for anything.”

FORT MONMOUTH, N.J. -- In line with the current agreement to pull U.S. troops…