Special: The Gunny on Sidearms 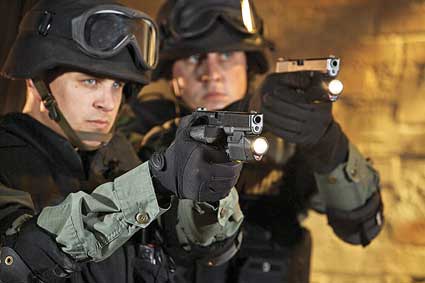 Readers have asked about your position and support of Glock pistols. If you had to “sell” the no-mechanical-safety lever advantage to military procurement officers who buy weapons, what would you tell them?
There are two reasons why I like Glock pistols for service in the military, especially the U.S. military. The first has to do with the economy of motion. What’s the role of the pistol in combat? I think Jeff Cooper explained it best, “to fight your way back to the rifle you should have been using!” The role of the pistol and how it is used in combat is based upon the combat environment, usually when a soldier has limited space to move and fire or they have exhausted all other weapons and they are down to the handgun. If a handgun needs to be used then you need the least number of things that have to be switched to make the gun function. Soldiers under stress react differently, but the common element crucial to survival is the time it takes to react.

The second reason I like these pistols for service in the military is because a Glock pistol only has 29 parts. Simply put, you decrease the amount of parts, you increase the reliability of the pistol, and we are seeing how crucial that is in the theater of war we are currently deployed to.

In my opinion, the need for a manual safety on a pistol is to compensate for a lack of training in the responsible handling of handguns in any environment. I see where commanders are mandating their troops to keep the chamber empty. I was curious about that and was told that field commanders are constantly evaluating their threat level and sometimes make those calls.

I started to think about that. Personally, I never store a loaded weapon in the home, however I’m seldom found in places where there is that level of threat. The only time I ever put a round in the chamber is when somebody’s gonna have a bad day. If I put a round in that chamber the threat level is elevated, it means I’m gonna shoot you.

A round in the chamber means they could jump you, take the gun, loaded and ready. Do you worry about that?
Hell no. Let’s face it, they could do that anyway. It could be loaded and ready to go and somebody could still take your weapon. If you’re that clumsy, that sloppy, to allow that to happen, a safety, the bad guys will probably know how to disengage, won’t stop them. You have to be personally prepared and well versed in the operation of your gun. Period. But there are so many crazies and maniacs today , I think you’re stupid to be in your home thinking you’re safe. Everyone should be afforded protection. I can call 911. It’ll take ’em about a half and hour to get here. That will be 29 minutes too late.

Can you elaborate on the selection of handguns among LE around the world?
About 70 percent of LE in America today are using Glocks. Here’s a group of folks that work in all sorts of threat levels every day. They carry loaded with one in the chamber, but they receive training and that training is reinforced. They understand the importance every day to be the first out of the holster, first to align the sights and the first to fire when they must. I just got to visit the Chicago P.D. They recently went with Glock. That’s another one of the largest P.D.s in the country. Police departments don’t just wake up one morning and say, “let’s go with this sidearm or that one.” They test all of the available weapons, and under very adverse conditions. And, to have 70 percent of them armed with Glocks…that’s got to tell you something. Doesn’t it? But it goes beyond law enforcement. The military, right now, the Special Forces, Special Ops, those guys that get to choose their weapons, the weapons they want to carry into combat, they carry Glock. They like the .45 GAP and they like the .45 ACP. It’s a good, solid weapon.