by Tactical-Life
in Guns, Special Weapons
0

Chambered in .45 ACP, the Thompson M1 is a semi-auto replica of the famous American submachine gun from World War II. However, the special-edition model has some added flair. 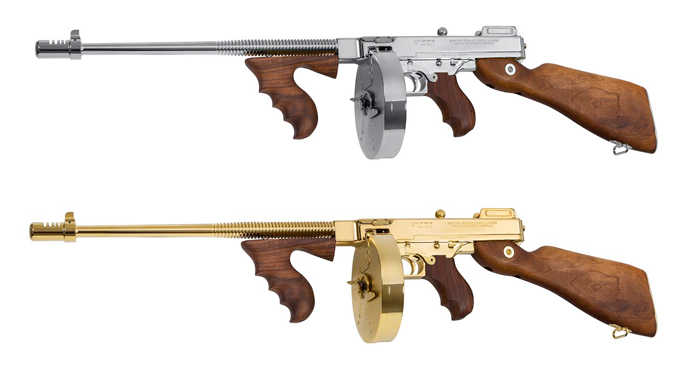 Auto-Ordnance literally created the new Thompsons around the phrase “Built like a tank.”

The manufacturer designed the series of WWII commemorative guns to honor the memory of the brave American soldiers who faced the enemy in steel chariots like the M4 Sherman Tank.

“Nearly 50,000 Shermans were produced during World War II, seeing action primarily in Europe against Nazi Germany. Just like the Thompson, these Shermans were a vital part of the war effort,” Auto-Ordnance said in a release. “Though the crews that took them into harm’s way were often outgunned by German tanks, they took the fight to the enemy and achieved victory despite the odds.”

The manufacturer also engraved the white star of the Sherman Tank just in front of the magwell, while a “U.S.” logo appears on the buttstock.

Like every Thompson, the gun is all steel with high-grade walnut furniture. The barrel is 16-inches.

The firearm features a walnut-fixed stock and a vertical foregrip. It comes with 30-round and 20-round stick magazines, a Kerr sling and a mag pouch.