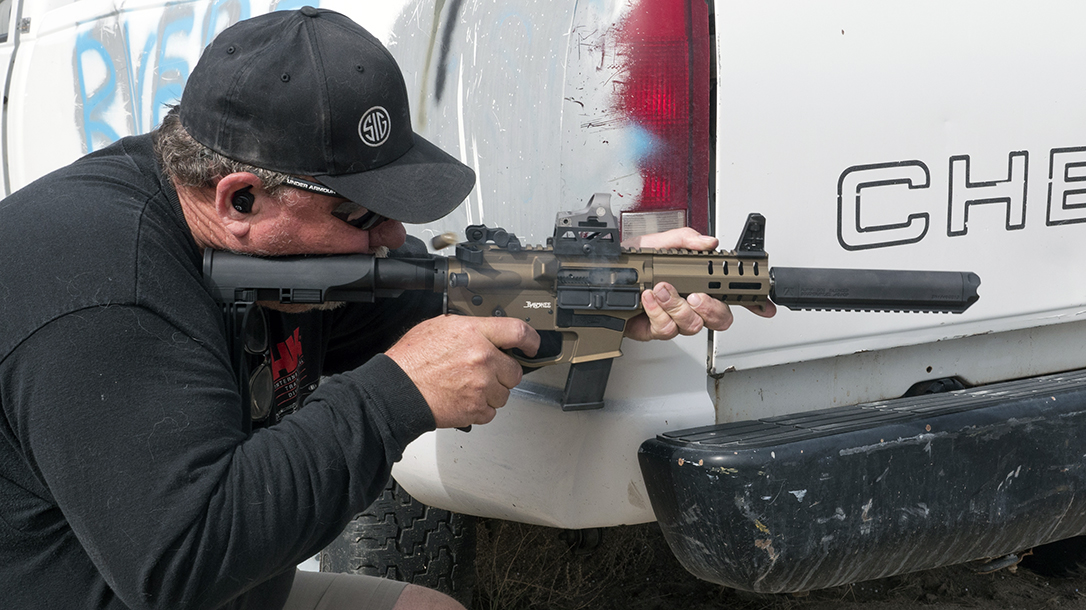 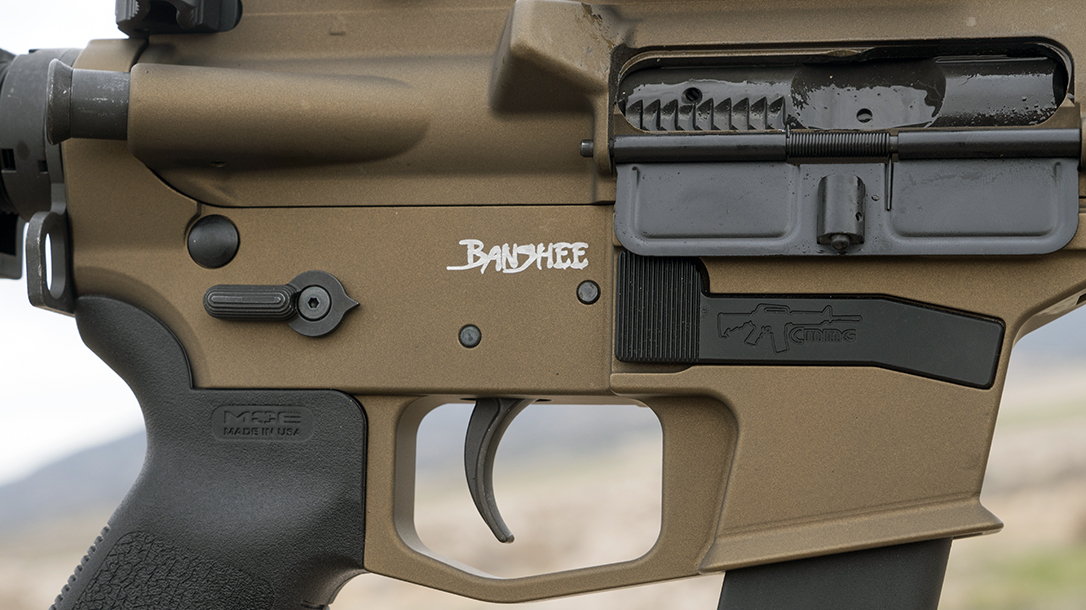 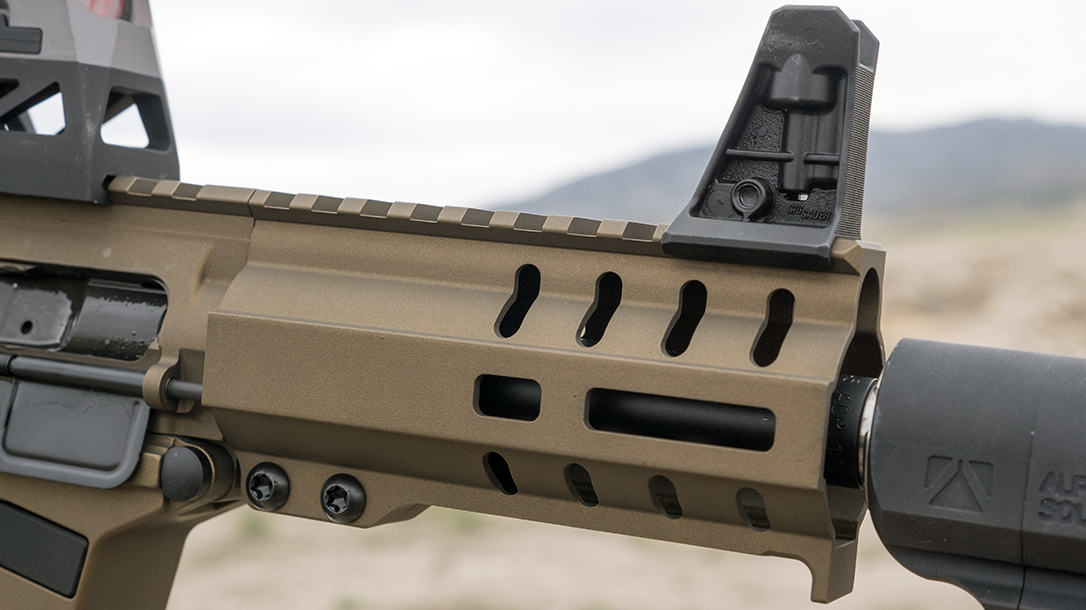 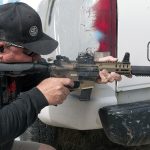 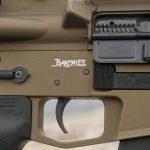 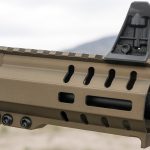 CMMG has become a company dedicated to what I call simple innovation. Its Mk47 Mutant was a simple solution for those clamoring for a reliable 7.62x39mm AR-platform rifle capable of using AK-style magazines. With this series, CMMG wisely decided to start with a .308-based bolt and then build the entire system around it, resulting in some of the most accurate and reliable 7.62x39mm semi-autos available. The company then expanded on its PowerBolt design to create rifles in .458 SOCOM, then 6.5 Grendel. 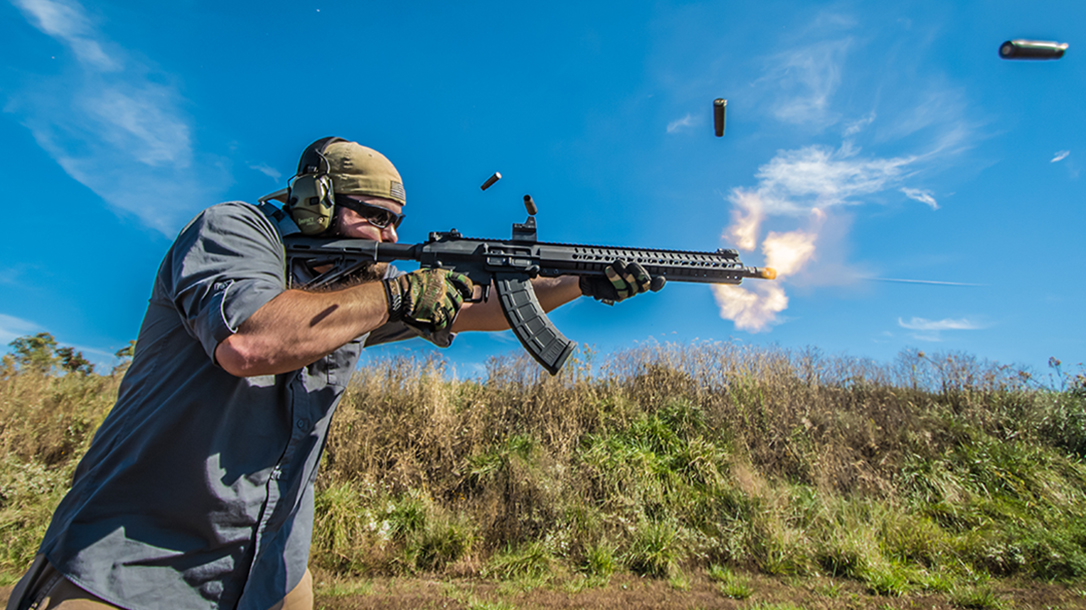 Of course, it’s also important to note that while CMMG keeps innovating, it does so without charging exorbitant prices, which isn’t always the case with firearms manufacturers. So when CMMG decided to create some truly compact AR-platform pistols and carbines, it’s no surprise that the company did it right.

The new Banshee series include short-barreled rifles (SBRs) and pistols in 9mm, .45 ACP and 300 Blackout with some of the shortest barrels available. State-of-the-art weapons, each Banshee is versatile enough for home defense, competition or just plain fun on the range. They’re also incredibly lightweight and portable, which should make them pretty popular with today’s shooters.

The 9mm and .45 ACP Banshees feed from factory Glock magazines and utilize CMMG’s patent-pending “Radial-Delayed” blowback operating system. The benefit of this system is that it allows the gun to use a lighter buffer and carrier than a typical straight-blowback design. This reduction in reciprocating mass ensures that both the 9mm and .45 ACP versions of the Banshee are easily controllable.

These pistols also come with ambidextrous charging handles, sling plates and safeties as well as Tailhook Mod 2 arm braces from Gear Head Works. This polymer arm brace uses a proprietary buffer tube that allows for five different length-of-pull positions. After you find the right length to fit your arm, you can then release the hook to wrap around your forearm.

I got my hands on a .45 ACP Banshee AR Pistol for testing, and it sported a 5-inch, 4140 chrome-moly barrel with .578×28-tpi muzzle threading for devices like suppressors, and a knurled thread protector was included. Surrounding the barrel is CMMG’s RML4 handguard, which features a full-length top rail, M-LOK slots on the sides and a hand stop on the bottom to prevent your support hand from going too far forward.

While the upper receiver is forged from 7075-T6 aluminum, the lower is machined from a billet of the same material. CMMG then installs a mil-spec-style single-stage trigger as well as a Magpul MOE pistol grip. As mentioned, the safety and magazine release are ambidextrous, and the magazine well is flared for quick reloading with .45 ACP Glock magazines.

While the barrel and smaller parts were left black on my test pistol, the receivers were finished in durable Burnt Bronze Cerakote, and CMMG included a single 13-round Glock 21 magazine.

For targeting, I added one of Sig Sauer’s ROMEO3 reflex sights. Equipped with a mount to co-witness with AR sights, the ROMEO3 has become one of my favorites. You can easily adjust the reticle’s brightness with simple buttons on the side, and you can replace the battery without removing the sight from the gun. An Allen wrench is all that is needed to adjust for windage or elevation and lock the adjustments in place. For backup sights, I installed a fixed front sight and flip-up rear sight from Sig Sauer. I also used one of Magpul’s MS3 slings when necessary.

I ran the Banshee AR Pistol with an Alpha Dog .45 ACP suppressor for much of the testing. This is a very quiet can that weighs only 10.6 ounces. What makes it truly unique is that one side has a Picatinny rail that can be used as a mounting platform for sights when turned upward or lights and lasers when left downward. Simply thread the Alpha Dog on and then line up the rail to your position of choice. It’s made primarily of aluminum, so it’s durable without adding too much weight toward the front of your weapon.

Back when I was part of my local police department’s SWAT team, one of entry weapons was the Heckler & Koch UMP in .45 ACP. It was very accurate. In fact, it was more accurate than our previous 9mm weapons. Just using iron sights, I could easily cluster every round into one ragged hole at 15 yards. With a red-dot sight in place, I could get the same results at 25 yards, and I regularly put 10 rounds into a group just over an inch wide at 50 yards.

The Banshee performed similarly. Using a bag as a rest on a bench, I was able to put five Barnes 185-grain TAC-XPD rounds into about half an inch at 25 yards. Moving back to 50 yards, my groups were still less than an inch wide. The Banshee was very light on recoil as well, especially suppressed. It was easy to maintain control over the pistol.At 100 yards, the Banshee clustered 10 DoubleTap 160-grain TAC-XP +P rounds into a fist-sized group. This load is typically a handful out of a 5-inch-barreled 1911 at 1,200 fps, but with the Banshee AR Pistol, you barely notice the recoil—another advantage to this platform.

The pistol’s reliability was excellent suppressed or not. With the brace hooked around my forearm, the Banshee cycled everything without issue. The brace was also helpful because I have wide, short forearms but could find the right fit. Other braces with fixed lengths are just about useless to me. That wasn’t the case here. It was also easy to keep the brace locked into my bicep, and when that occasional inadvertent shouldering occurred, my nose didn’t get smacked by the charging handle.

The only Glock 21 magazines in inventory were OEM 13-rounders, and they all worked perfectly. I had no issues seating full magazines, although it took some solid pressure to do so. Yet, when I pressed the magazine release, the magazines all dropped free, and the Banshee’s bolt locked open after firing the last round. The Banshee’s versatility would only increase with larger aftermarket magazines.

Cleaning the Banshee AR Pistol is just like an AR. The bolt carrier takes down the same way, but it’s spring loaded, so keep track of the extra parts. The pistol uses a standard carbine “H” buffer and spring. It all stayed pretty clean, but pistol powders are often dirty, so just keep the Banshee oiled and wipe it down periodically when using a suppressor. Through several hundred rounds, I oiled it a couple times and didn’t experience a single failure.

The more I use pistol-caliber ARs, the more I like them. I guess you can call me a slow and somewhat reluctant convert. Because the controls are standard AR, these guns are perfect practice weapons that use much less expensive ammunition. They’re also a fantastic way to get your kids involved in target shooting since they lack the oppressive blast of the rifle calibers and have very little recoil.

If you don’t want a rifle for home or vehicle defense, these guns offer a number of advantages, especially in states where rifles are all but outlawed or cannot be carried in vehicles outside of the trunk. CMMG’s Banshee line adds some great choices to this ever-growing segment of the firearms world. If you are looking for an AR pistol, make sure these are on your list. 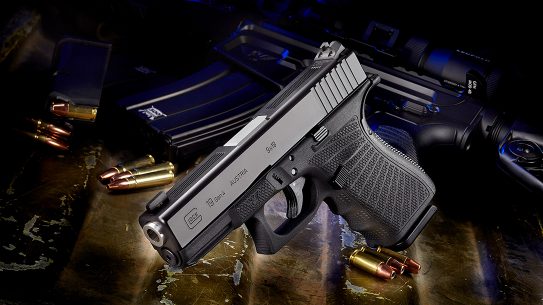 Sweat, Lead and Steel: What It Takes to Be the...