"I'll be shocked if this thing doesn’t turn up in half a dozen big-budget action movies within the next year."

The jihadi tossed one more furtive glance up and around, searching the skies for American drones. The infidels seemed to have a limitless supply of the cursed things, and they could end an ISIS fighter’s life in an instant. He felt the throaty rumble of the powerful diesel engines as the American convey inched its way up the shattered roadway. His lips began to move of their own accord as he softly repeated to himself, “God is great, God is great, God is great…”

His right hand tightened around the pistol grip of his Romanian AKM. His left thumb hovered over the detonator to his suicide vest. When the noise of the MRAP vehicle sounded like it was close enough, he sucked in one last deep breath and pivoted around the corner to face the invaders.

Before the insurgent could react, there came a flash and, in less than two seconds, 130 bullets of the 62-grain 5.56mm variety impacted his chest. The entire burst covered an area roughly the size of a teacup. He was dead before his brain knew he’d been shot.

The XM556 Microgun slewed up and forward to resume its scanning around the lead vehicle. The gun’s operator, a 19-year-old Marine from Birmingham, Alabama, was seated comfortably behind a CRT screen within the bowels of the heavily armored truck. The young Marine chuckled in spite of himself. What a freaking mess.

The orbiting drone showed him another upcoming heat signature among the rubble. The lance corporal checked the readout on his rounds remaining and tracked the stubby little Gatling gun toward the target. It looked like it was going to be another fruitful day. 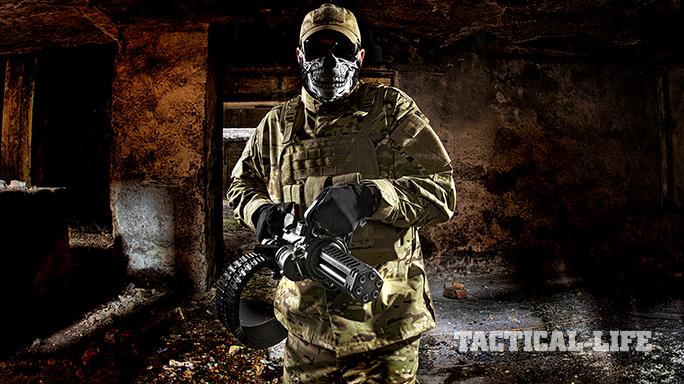 No, as you can probably tell, the aforementioned bit of fiction isn’t drawn from the latest Terminator installment. The technology to bring this kind of operational security to American troops in the field already exists in the present. By melding modern sensor technology with an inimitably cool new miniaturized Gatling gun, tomorrow’s warfighters could find that their jobs just got a lot safer.

Though he never practiced medicine, Dr. Richard Gatling was actually a physician by training. Dr. Gatling was first and foremost an inventor. His several agricultural machines revolutionized farm life in the American Midwest. Though his many-splendored inventions included improved bicycles, toilets and wool-cleaning machines, the one contrivance history has most associated with his name is the eponymous multi-barrel rotary Gatling gun.

The manually operated Gatling gun, though not a true machine gun in the purest sense, was a capable combat multiplier in the late 19th century. Dr. Gatling’s guns were used on both ground and naval mounts for decades leading up to the widespread adoption of self-loading machine guns like the Maxim. However, in the post-WWII world of fast jets and rapidly evolving air combat, General Electric engineers thought to slap an electric motor on a Gatling gun, and the weapon received an entirely new lease on life.

The 1980s-era Close-In Weapon System, or CIWS (pronounced “sea-whiz”), consists of a 20mm M61 Vulcan rotary cannon slaved to an incredibly advanced fire control radar and FLIR imager. This system ably defends American naval vessels against sea-skimming cruise missiles and aircraft even today. Firing 4,500 rounds per minute, the CIWS is a self-contained point-defense system that can be fitted to most any naval vessel.

The terrestrial version of this system is called the C-RAM Centurion. C-RAM stands for “Counter Rocket, Artillery, Mortar,” and this system can effectively neutralize incoming indirect fire assets in defense of ground installations. Now with the advent of the Empty Shell XM556, the capability exists to miniaturize a similar system to fit onto an MRAP or Hummer.

Your first impression when you lay your hands on the XM556 Microgun is that it is tiny—like MP5-with-the-stock-collapsed tiny. Once you heft the rig and feel the weight, it feels solid and dense. The electrical pigtail hangs off the back, and the two hand grips interface nicely with the human form. The overall effect is kind of surreal, like you stepped into the movie Aliens.

The XM556 weighs 16 pounds unloaded. Let’s put that in perspective. That’s a pound less than an M249 SAW. The WWII-era BAR weighed 3 more pounds. An M240B weighs close to twice as much. A Thompson submachine gun with a loaded drum magazine is heavier than the XM556 Microgun. However, when fully tooled up, the XM556 can run from 3,000 to 6,000 rounds per minute. Holy crap.

The handheld version of the XM556 is an interesting novelty. The gun requires a DC power supply, and 10- or 16-inch barrels are available. The cyclic rate of fire is also selectable.

The recoil from a single 5.56mm NATO round is notoriously mild. How many times has a crusty Army drill instructor firmly planted the buttstock of his M16 rifle against the family jewels and touched off a round? Such antics as this leave an impression on young soldiers not soon forgotten. However, touching off so many of these light-recoiling rounds per second inevitably becomes a handful. Add to that the prodigious appetite the XM556 has for M27 linked 5.56mm ammunition along with its obligate power supply and you have a cumbersome package. There are indeed a few practical applications for such a contrivance, perhaps for special operators who need to establish overwhelming fire superiority for short periods. These situations would be admittedly narrow and specialized.

However, the XM556 also comes as a pintle-mounted weapon. While the handheld variant definitely rocks the cool points, the vehicle-mounted version is what got my heart pumping. Adapt this system to existing sensors and fire control systems, feed it generously from a vehicle-mounted ammo can and run it off of a vehicular electrical system, and you have the biggest increase in a ground-pounder’s organic firepower since Hiram Maxim first dreamt up the belt-fed machine gun. Build the system around some cutting-edge software and you have a tool that could conceivably neutralize an incoming RPG. 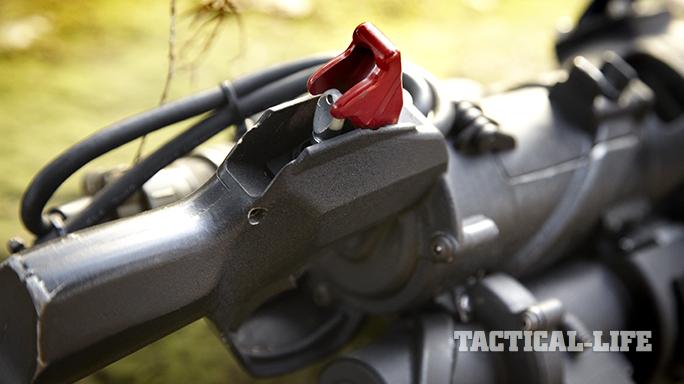 If you haven’t seen this gun in action, check out the link below. A short burst into a pond sounds like a vigorous robot fart. These guys run the short-barreled version of the gun on an indoor range, and the muzzle flash is truly epic. Keep in mind that a single round through a short-barreled AR pistol produces a pleasant volleyball-sized ball of fire when touched off without a flash suppressor. I’d comment on how many holes they punched in the target, but the muzzle blast pinned the paper target to the ceiling.

I’ll be shocked if this thing doesn’t turn up in half a dozen big-budget action movies within the next year. Seeing Jesse Ventura behind the 7.62mm M134, the big brother to the XM556 Microgun, in the movie Predator veritably changed my life. The same gun in Schwarzenegger’s meaty cyborg mitts in Terminator 2 made for some of the coolest visuals ever to find their way onto celluloid.

I don’t know if moviemakers read gun magazines, but I would like to make a personal plea: I’d really love to see somebody chew through a few dozen zombies or mow down a platoon’s worth of terrorists with the XM556. Heck, the thing only weighs 16 pounds. Let some hot girl shoot it if you really want some stunning visuals. 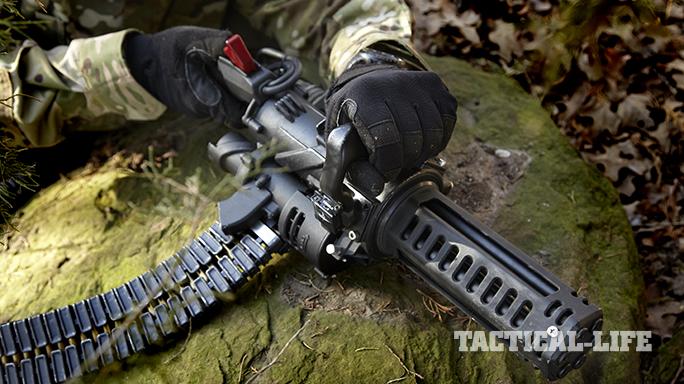 I have seen a lot of cool ideas come and go. The latest, greatest AR rifle is rapidly becoming yesterday’s news, and the newest combat handgun is simply a variation on a theme. However, in the XM556 we see something truly novel.

We normal folk will never own one of these babies. Short of the heavens parting and miraculously overturning the 1986 machine gun ban, there is simply no way to produce newly made automatic weapons for civilian consumption. I’m stoked about President Trump, but even I think that would be a bridge too far. We will have to satisfy ourselves with displays at the SHOT Show and press releases about military contracts. However, the XM556 has great military potential.

When operated from remote mountings on vehicles or even strapped underneath tomorrow’s combat drones, the XM556 offers unprecedented firepower at a shockingly modest weight. For applications at 600 meters or less, the Microgun could be a tactical game-changer. If life went sideways, you could strap a car battery to your back along with 1,000 rounds of ammo and turn yourself into a real-life Terminator. I’d pay extra taxes to make that dream a reality.