A Look at the Penn Arms PGL-65 40mm Launcher

0
SHARES
85
VIEWS
Share on FacebookShare on Twitter
The Penn Arms PGL-65 is extremely durable, easy to use, and provides a great way to subdue suspects safely.

Various incarnations of launched- impact munitions have been with us for several decades. A few 37mm and 12-gauge rounds were met with some limited success. However, most of those rounds were originally designed for riot control—they were not intended to be fired directly at a person. Instead, many, such as “wood baton” rounds, were meant to be “skip fired” in front of a violent crowd that officers were trying to disperse. The rounds’ effectiveness varied, and their use was often restricted to special riot-control units or other engagement teams. This left patrol officers responding to in-progress calls with little more than chemical sprays (such as OC or Mace) and contact weapons (such as batons) for less-lethal applications. As a result, many situations deteriorated to the point where a firearm had to be used.

While chemical sprays and contact weapons have a long history with law enforcement, they both require the officer engage the offender at close distance, which puts the officer in extreme risk—sometimes leading to tragedy. Even when electro-muscular disruption devices such as the Taser became prevalent (often to the exclusion of other intermediate weapons), the need for weapons that enabled officers to incapacitate suspects from safer, longer distances remained. 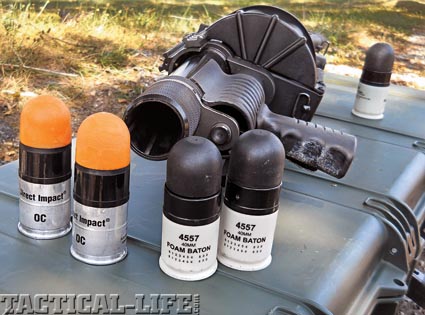 The PGL-65 is ready for today’s 40mm munitions, such as orange Direct Impact OC rounds or Combined Systems’ foam batons.

The first launched-impact round to see wide use was the 12-gauge beanbag round. Capable of being launched from any standard 12-gauge shotgun, the first such impact rounds consisted of a 1-by-1-inch square bag containing small-diameter lead shot. While these rounds began to rack up successful deployments and were credited with many lifesaving interventions, there were some problems. Some reported that the original designs were often inaccurate and that the bags did not retain their lead shot on impact, causing unnecessary injuries. Projectile designs have since evolved and improved to the point where the less-lethal 12-gauge projectile, now commonly in the form of a sock, is widely used by police.
However, there still remained