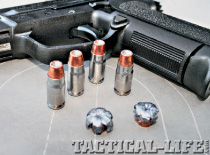 Speer Gold Dot ammunition arrived on the scene in 1995 and quickly established a reputation as a very capable performer. In a decade and a half, Gold Dot literally came out of nowhere to become the most popular ammunition line of law enforcement agencies. Actual street results from this hollow point design are very good and effectiveness puts it in high demand with law enforcement officers, armed professionals, and responsible citizens.

To create the Gold Dot bullet, the engineers at Speer employed a great deal of “out-of-the-box” thinking. Conventional hollow point bullets typically consist of a lead core enveloped by a thin, copper alloy jacket. Under most field conditions, this formula has proven to be very effective. There are, however, some inherent flaws in its design. Should such a bullet have to pass through an intermediate object in front of a threat, jacket/core separation may occur. This has a detrimental effect on both accuracy and stopping potential.

Uni-Cor Tech
With the Gold Dot line, Speer has overcome this pitfall with their exclusive Uni-Cor technology. Gold Dot is the first high-performance line of handgun ammunition to be loaded with a true bonded bullet that will not fail when passing through common barriers such as wallboard or auto glass. Essentially, the jacket is applied to the lead core one molecule at a time, creating a bullet of the highest integrity.

Other manufacturers have turned out plated bullets with thin jackets that are best utilized for target shooting. The Uni-Cor process is much more than a plating application, and Speer is able to optimize jacket thickness and bullet weight to ensure ideal levels of penetration and expansion for a particular round.

A Gold Dot bullet starts as a lead alloy core. Through an electro-chemical process, the jacket is applied to the core, creating an inseparable bond, while running the bullet through a series of dies creates the hollow point cavity. In the first stage, the cavity itself is formed along with memory lines to facilitate expansion. A second forming stage finishes the cavity and produces a smooth leading edge for reliable feeding and a uniform heel to enhance accuracy.

Speer Gold Dot bullets are loaded in nickel-plated cases for smooth feeding and to resist corrosion. For positive ignition, CCI primers are utilized. Low flash propellants are selected that best suit the performance characteristics of a particular cartridge. In low light conditions, it has been my experience that Gold Dot ammunition puts out far less distracting muzzle flash than most other manufacturers.

Ammo Testing
I’ve had some significant experience with Gold Dot ammunition in 9mm and .38 Special, but I’ll confess to less time with their other offerings. To get a better feel for their capabilities, I’ve gathered seven different types of Gold Dot ammunition and set off to the range to see what they could do.

The thick denim effectively simulates heavy clothing worn by an assailant and has been known to play havoc with bullet expansion. Poorly designed bullets often foul with clothing fibers, fail to expand, and behave very much like a full metal jacket. As a result, little damage is inflicted and stopping potential is reduced. While performance against glass, sheet metal, and wallboard can be important, I place far greater emphasis on penetration through heavy clothing. In the grand scheme of things, an assailant dressed in heavy clothing is the most likely scenario.

First up for consideration is Speer’s .38 Special +P 135-grain Gold Dot hollow point. With rare exception, bullet expansion from a 2-inch, .38 Special snub is wishful thinking. The good news is that this Gold Dot offering does perform in a snub and goes to the top of a very short list of .38 Special +P loads that I’m comfortable with. This round averaged 12.8 inches of penetration into the gelatin blocks after passing through the denim barrier with expansion roughly 1.5 times original diameter. Average muzzle velocity clocked out to 897 fps (feet per second) from an S&W M649 Bodyguard.

The 9mm Gold Dot is yet another top shelf performer. In this ever-popular round, testing was conducted with the 124-grain +P load. This same load is utilized by the New York City Police Department and the New Jersey State Police. From a GLOCK 19, average muzzle velocity was 1181 fps with a penetration depth of 15.1 inches. Expansion of recovered bullets was picture perfect, averaging out to 0.63 of an inch.

The .357 SIG cartridge comes very close to duplicating the performance of the highly regarded .357 Mag, and in some ways, actually exceeds it. This round enjoys a bit of popularity with Highway Patrol/State Police agencies, as well as with a few elite Federal outfits. From a Sig Sauer 2340, the .357 SIG 125-grain Gold Dot screamed along at 1375 fps and navigated 17.5 inches of denim covered gelatin. Expanded diameter averaged out to 0.61 of an inch. For busting through light barriers, .357 SIG Gold Dot would be tough to beat.

In less than a decade, the .40 S&W went from an idea to the most popular police cartridge here in the US. Speer’s 165-grain Gold Dot proved to be a real barn burner when fired from a Glock 22 with a muzzle velocity that exceeded most 155-grain loads. This mid-weight .40 clocked 1184 fps and posted a very consistent depth of penetration, which averaged 13.3 inches. Expanded diameter of recovered bullets was 0.62 of an inch, slightly greater than 1.5 times the original diameter.

In an earlier era of time, the .44 Special enjoyed cult status with shooters who preferred a big bore revolver for self-defense. With the development of reliable expanding ammunition, the .44 Special became a far less attractive proposition for a number of reasons. Smaller, lighter, mid-bores with a good load could out-perform the .44 Special. With rare exception, good defensive loads in .44 Special were tough to come by.

That’s all changed now and Speer’s 200-grain Special Gold Dot load makes the .44 Special a real player. From my S&W M624, this load crossed the chronograph screens at a modest 731 fps, but expansion was still very good at 0.60 of an inch. Average depth of penetration was 12.6 inches. Smith Wesson has turned out some .44 special L-frames as well as larger N-frame Classics with 4 and 6 inch barrels. The Gold Dot load is just what the doctor ordered in these big bore revolvers.

A few years ago, Glock, in cooperation with ATK, introduced the .45 GAP cartridge. The shorter .45 GAP case delivers .45 ACP ballistics from a bullet launcher that sports a similar size handle to a Glock 9mm. Both the Pennsylvania and New York State Police are now issuing Glock pistols chambered in .45 GAP.

Although I did not have access to a .45 GAP pistol, I was able to get by with my S&W M625 revolver. Loaded in full moon clips, it is perfectly safe to fire the abbreviated GAP round in the .45 ACP revolver. Performance of the 185-grain load was most impressive. From my 4-inch revolver, muzzle velocity was 970 fps. I would expect it to fly just a bit faster from a full size Glock 37 service pistol. Penetration averaged 13.7 inches with expanded diameter of recovered bullets coming in at 0.62 of an inches.

America’s favorite, the .45 ACP, also turned in a stellar performance. The 230- grain Gold Dot load averaged 880 fps from a Kimber Desert Warrior and penetrated to a depth of 12.8 inches. Expanded diameter averaged out to 0.63 of an inch and, like all other recovered Gold Dot bullets, retained weight was right around 100%.

In the past, I’ve had the opportunity to watch a number of ballistic demonstrations where Gold Dot bullets were fired through hand barriers such as steel, glass, and wallboard. Performance was always just as advertised. The attributes of the Gold Dot bullet has not been lost on the smaller manufacturers who continue to use Gold Dot bullets in creating their own lines of ammunition.

Whether for law enforcement or responsible citizens, Speer Gold Dot has got it covered. In addition to the Gold Dot rounds reviewed, Speer also turns out a “short barrel” Gold Dot line, optimized for smaller defensive handguns. Without question, Gold Dot gets it done. Find out more at speer-ammo.com or call 800-256-8685.